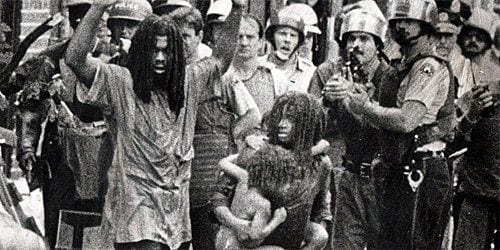 “I wasn’t saved by a cop. I was saved by my mother. She pushed me out. She could have saved herself but instead she got me out.”

“Do you know what it is to tell the truth about things?” Michael Ward, just 13 years old in October 1985, looks at his questioner, William Brown III, and nods, barely. “Don’t lie,” he says. Brown asks whether he knows what happens to someone who lies. The boy nods, “They get hurt.”

Here the video recording of Michael’s deposition scritches and wavers and fades to black, an image distortion that underscores the fragility of such an effort to document, to remember, to assert truth. Here Let the Fire Burn cuts to TV reports of the ordeal this boy survived, which is to say, shots of fire raging at 6221 Osage Avenue, the rowhouse occupied by the MOVE organization and assaulted by the city of Philadelphia on 13 May 1985. Michael, at the time called Birdie Africa, emerged badly burned. Eleven people died in the fire, including five children, and 61 homes were destroyed, owing to city officials’ decision to “let the fire burn” (the police commissioner at the time, Gregore Sambor, testifies.

The only other survivor, Ramona Africa, appears in archival interview, declaring, “We have done nothing wrong,” followed by more images of the chaos, a police helicopter and firemen standing on the sidewalk, hands to their ears, and then a shot of Wilson Goode, Philadelphia mayor at the time. “I stand fully accountable,” he says.

This opening montage sets the focus of Jason Oder’s remarkable documentary, which uses only archival footage — TV reports, press conferences and interviews, as well as footage from the Philadelphia Special Investigation Commission (PSIC) looking into the event, that is, the Commission chaired by William Brown III. As these many images and testimonies accumulate, they form something of a chronology, noting MOVE’s founding by John Africa in 1972, its back-to-nature philosophy and animal rights, along with a selective rejection of technology: they had no TVs or phones, though, as one TV report here observes, the members did drive cars and use PA systems to proclaim their beliefs and, by most accounts, annoy and alarm their neighbors.

It’s difficult to sort out the faults and trajectories of the antagonisms between MOVE and their neighbors, as well as the Philadelphia police department, but it is plain the relationship became increasingly hostile. Let the Fire Burn tracks these tensions in some detail, including the 1978 shoot out at the group’s home in Powelton Village that resulted in injuries to MOVE members, firemen, policemen, and bystanders and the death of police officer James Ramp.

Nine MOVE members were found guilty of third degree murder and sentenced to prison terms. In 1981, MOVE relocated to Osage Avenue, where they began using bullhorns and foul language to assert their political beliefs. Here again, the film assembles a narrative from archival sources: a police officer at the 1985 Commission says, “Anything that was vile, they would go into it,” followed by a man-on-the-street interview with a neighbor who says, “What we really hoped for was the city would find a way to deal with the situation.”

As Let the Fire Burn represents such frustrations, as well as footage of MOVE children and adults that suggests how they might have upset neighbors, it also shows not only that the city’s “way” of dealing with MOVE was disturbing, but also that authorities lied during the Commission hearings. When Sambor suggests that the MOVE members fired first, and he personally heard automatic weapons fire coming from the house, the film points out that no automatic weapons were found inside 6221 Osage Avenue.

Asked what he heard MOVE members say, the police commissioner remembers they taunted officers, yelling that not only would the officers be dead by the end of the day but as well, “Our wives would be sleeping with black men.” Asked to characterize such threats, Sambor says, “They were efforts to incite myself and other police.”

That authorities were so incited seems clear enough, and the film notes too that several members of the police force that day were also involved in the 1978 shooting and so might have been seeking revenge. Perhaps the most devastating decision during a day filled with such decisions came when Goode okayed and Sambor carried out the deployment of explosives onto the MOVE house roof, at which point the fire erupted. While Sambor explains that the intention was to remove or ruin what he describes as a bunker on the roof, reports have it that he ordered the firemen on scene to “Let the fire burn.”

While Sambor and Fire Commissioner William Richmond both deny giving or hearing that order, the phrase resonates throughout the film, even apart from its title. Witnesses describe the effects of the bomb and the fire, one reporter saying, “It’s another Vietnam out there.” The phrase speaks as well to the monstrous arrogance of the authorities at the time, an arrogance and sense of self-righteousness that produced and were produced by lies.

Whether or not someone said the words, for residents of Philadelphia at that moment — myself included — the effects of the event linger still. The gunfire and explosion, the smoke and heat, the horror of the day and the aftermath, remain unresolved, a sore point underscored in Let the Fire Burn when it reveals that the PSIC concluded that “City officials were negligent in their actions,” but “No criminal charges were ever filed.”

And so the phrase “Let the fire burn” speaks also to a broader interest, in the problem of history and memory, in claims to truth and authority. As Let the Fire Burn opens with young Michael, so it also it returns to his deposition repeatedly, creating a rhythm, reconnecting the various pieces with this child’s story. Brown is resolutely gentle with him, allowing him to tell his story, about whether he liked living at the house, whether he or his friends were spanked or ever wanted to leave. The boy responds to each question put to him, and as the camera pushes in for close-ups of his scarred face or pulls out to show him seated alongside three adult men in suits and ties (one a lawyer brought in by his father Andino Ward, not a MOVE member).

As the men look toward Michael or the camera, posed with legal pads and awkward demeanors, you can only wonder how anyone in that room imagined a truth emerging, or whether they considered how such truth might be used or framed or remembered. Asked about that frightening, traumatizing day, Michael recalls smoke and tear gas. “Did it burn your eyes?” asks Brown. “Yes,” says Michael.