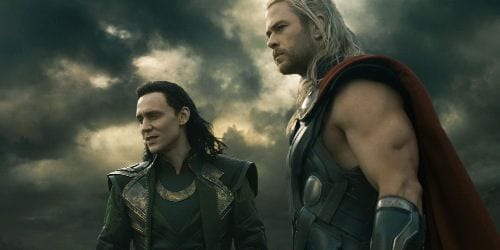 If ever there was a movie villain made for his own marquee breakout, it’s Tom Hiddleston’s sensational combination of cruelty and camp known as Loki, adopted son of Odin, brother to Thor. As a Prince of Asgard and constant thorn in the side of his family and current crop of Avengers, this pompous ass with a devilish grin chews so much scenery with so much intended glee that he’s probably picking parts of his home planet out of his teeth as we speak. Hiddleston, heretofore unknown to most American audiences, uses that very clipped British accent of his to imbue the character with a level of menace that’s both pleasing and precarious. He’s the very definition of someone you love to hate, constantly plotting against the good guys while providing enough personality to get your rooting for his deliciously evil ways.

In fact, without Hiddleston along to help the rest of the cast endure it, Thor: The Dark World would fall under the weight of its own pretense. It’s a mildly entertaining, decent facet of Marvel’s overall moviemaking strategy, but it can’t hold a candle to Iron Man, Iron Man 3, or The Avengers. Indeed, for those who complained after the first film that “we want more Asgard and the Nine Realms”, well, here’s the be-careful-what-you-wish-for response. Almost the entire film takes place on alien worlds, with only London getting a bit part as the scene of another epic apocalyptic metropolitan beatdown of sorts. There’s even a return of a post-Oscar Natalie Portman, a mostly naked Stellan Skarsgård, and a slightly irritating Kat Dennings (and let’s not discuss her intern boy toy Ian, played with cloying confusion by Jonathan Howard, all right?).

No, it’s Asgard mythology time, Odin’s (Anthony Hopkins) father being name-checked and featured in order to create a viable baddie this time around. The diabolical Dark Elf who goes by the name of Malekith (Christopher Eccleston) had once wanted to rule the Nine Realms through the use of some weird weightless “fluid” known as the Aether. Apparently, with it, he and his race can return the universe to their preferred state of ‘Darkness’. Naturally, Pops defeats him, stores the Aether deep within some secret hold, and more or less leaves it for anyone to stumble across, or better yet, steal. When Jane Foster (Portman) discovers an interplanetary anomaly near a London dockside, she ends up in the Aether’s prison, it ends up “inside” her, and this awakens Malekith, who spends the rest of the film trying to recapture it so he can, you know, turn out the cosmic lights.

So how does Loki become involved? How does Hiddleston get the chance to top himself and turn every line reading into a cleverly disguised example of malevolence, contempt, and outright joy? Well, it seems Thor (a very good Chris Hemsworth) wants to save Jane (the Aether is killing her with its ‘power’) and restore order to Asgard, and since he is without significant experience in the scheming department, he calls on his Bro for some assistance. It also helps that Loki is nursing a broken heart (a tragedy which won’t be spoiled here) and seems to be looking for a way to, once again, double cross his sibling and sit on the throne that he believes rightfully belongs to him. In between are battles, some bland lovey dovey between the extraterrestrial and his main squeeze, and a lot of post-Avengers malaise.

Indeed, if Marvel hopes to continue on with this hammer wielding hunk, it has to find better solo properties than this. Whatever its mistakes, at least Kenneth Branagh’s take on the material took it seriously, almost Shakespeareanly so. He gave us just enough to have us wanting more. Here, UK TV guy Alan Taylor (perhaps best known in commercial settings for cable series such as The Sopranos, Deadwood, Mad Men, and Game of Thrones) has difficulty delivering the “wow” factor. He’s like a second tier NFL quarterback brought in to efficiently manage the franchise without throwing an interception or causing a turnover… and he barely achieves that. It’s not that Thor: The Dark World is bad, it’s just uninspired. In fact, both stand-alone films featuring the character have been stolen by Loki and Hiddleston’s larger than life performance than because of anything involving the Mjolnir (this critic still remembers the days of Dr. Donald Blake and that magical ‘walking stick’).

Taylor must bear most of the blame here. He’s just not a good choice for this material. His concepts are too grounded, not outsized and spectacle oriented like the stuff Joss Whedon did in The Avengers. Here, when a ship crashes, it does so with little fanfare. About the only intriguing aspect of the action is the final fight which sees the characters transporting through different dimensions…along with random cars and pieces of pavement. It’s the only moment of invention in a film that would rather play it safe than play at all. At least Whedon understood that the final invasion would be underwhelming without some deft byplay between his heroes. Here, all we have is Thor, and while serviceable, he’s far from a sensation.

No, that title would belong to his beleaguered brother, his stringy black hair and dandy-ish manner mocking everything the genre holds sacred. Of course, Marvel announced recently that they have no future plans for Loki or his arc, which means we may have seen Hiddleston for the last time as part of this particular paradigm and that would be a mistake. Considering how popular he is, how commanding his performances are, and how necessary he is to the success of something like Thor: The Dark World, the comic company should reconsider. Without his suave sinister panache, this would be nothing more than a series of subpar space battles. With him, the Asgard angle has a viable place in the Marvel movie empire.