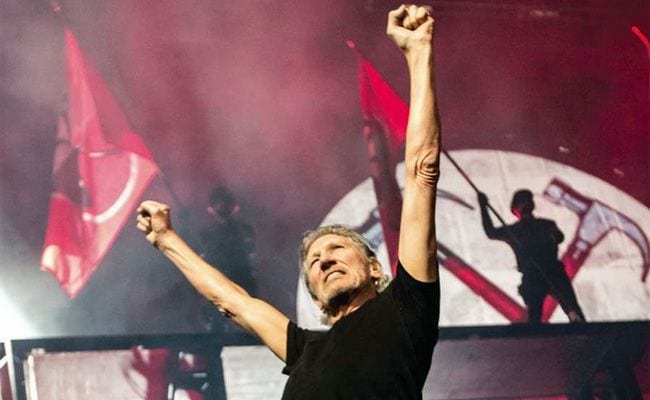 Dave Thompson’s Roger Waters The Man Behind The Wall could easily have been another cash-in semi-biography meant to ride the coattails of Roger Waters’ most recent revival of The Wall on tour. This would have worked, too, considering the fact that Waters’ “The Wall Live” was the biggest concert draw of 2012. Not bad for a 68-year-old man performing a 30 year old album.

Waters, now 70, is, of course, the often cantankerous musical genius behind Pink Floyd’s most creative years. The Wall, Animals, Wish You Were Here, Dark Side of the Moon and Meddle were all largely crafted by Waters and his three long-running band mates David Gilmour, Nick Mason and Richard Wright. Thus, the title of Thompson’s biography is somewhat misleading and certainly incomplete. That said, the title is the only part of the book that could be said to be a “cash in” on the resurgent success of The Wall Live.

Thompson doesn’t focus solely on The Wall, but upon the man behind it, with every single meaning you can deign from such a phrase. Those who know the story of The Wall either from the album, concerts or motion picture, will understand what literal and figurative meanings that title has. On the other hand, those with a familiarity with Pink Floyd and Roger Waters are not only the target audience for this book, but perhaps the only ones who would truly be able to keep up with the story Thompson tells.

That is not to say that Thompson is not thorough in this biography. On the contrary, the author (who has also penned books on Deep Purple, Judas Priest and George Clinton, amongst others) goes to great lengths to tell the story of Roger Waters from many angles and with much depth while still crafting an interesting read.

That, Thompson easily does. Thompson, an expatriate Brit now living in Delaware, has a wry and dry sense of humor and inserts surprisingly funny moments into this serious story to keep the reader smiling, even as the rollercoaster is about to hit a loop. Further, the author doesn’t bog himself down with an academic approach, instead crafting a rich and engrossing biography that somehow reads like a novel. A novel that jumps around in its oft-antagonistic protagonists story to tell varied portions of his life at the right time (for Thompson’s purposes, at least).

Thompson starts with the words “The Wall, was Roger Waters’s first solo album,” and gives the reader a context for the kind of man and artist Roger Waters is and the reason he has so many fans and detractors both in the audience and in his own bands. On the seventh page, Thompson rolls back to the time of Roger’s birth and begins to tell the story of Waters’ childhood, his tragically absent father and the forces that shaped his family even before the Pink Floyd bassist was born. These first several chapters lead us up through Waters’ young adulthood as he enters into architecture school.

Then Thompson takes a quantum leap forward, skipping the early years of the band and the first several albums, and picks up again as Waters is preparing to create The Wall, the second to last album of new material Pink Floyd released with him. This is a jarring jump for readers to say the least and those new to Waters’ history may well have trouble following what Thompson is doing, especially as he rarely touches upon these early musical years during the remainder of the book’s Part 1. Early events are only mentioned when clarity is required. This, of course, adds to more ambiguity for readers new to this story.

Instead of jumping backwards, Thompson forges ahead through Waters’ acrimonious split with the band, the legal wrangling and launch of his solo career and on through to the end of the ’80s. The name “Syd Barrett” (Pink Floyd’s founder and original vocalist and guitarist) is only alluded to in the entirety of Part 1, and never explicitly mentioned.

This feels strange, considering the depth with which Thompson tells this story. Even those with a strong knowledge of the story of the Floyd and Waters will find a lot to learn in this invaluable history of the man who helped reshape Pink Floyd into the powerhouse it became. Thompson has achieved this with an incredible amount of research, interviews and quotes that go significantly farther than the average Wikipedia reader could ever expect to be given.

But there’s also a method to Thompson’s ordering and as Part 1 ends with the first instance of the name “Syd”, Part 2 slides back in time to the recording of the Wish You Were Here album, which springboards the second half of the book into the previously omitted early days of Pink Floyd. This novel (no pun intended) approach feels like something of a reward to the patient, yet voracious reader who is finally given the missing chapters of this interesting story and can finally exhale. Thompson continues to tell these intertwined tales with a prose that turns a documentary into an epic. Thompson still jumps around in time and still inserts his dry one-liners into the proceeding pages, but now the overall map becomes clearer to the reader. I challenge anyone to close the book after page 119, except under extreme duress.

The Man Behind The Wall serves as an appreciative look at the life and works of Roger Waters with the critic inside of Dave Thompson barely able to contain his enthusiasm as he describes the musical tapestries that Waters created before and after his split from the band. Still, Thompson is no Roger Waters apologist. When weighing the rights and wrongs of the man he writes about, the author can be decidedly harsh and carries picture of Waters a bit beyond the stage of “warts and all”. However, Waters’ “prickly” nature is hardly a well-kept secret and if this well-researched volume were to somehow sugarcoat or excuse some of Waters’ actions, failings and outbursts, readers who know better would just as likely consider this to be the work of a praising enthusiast and little more than Fan Fiction.

The Man Behind The Wall is much more than that, however, and while there are some curious omissions (for all the early days’ thorough coverage, Waters’ resurrection of The Dark Side of the Moon and The Wall tours – and along with them, his career – is touched on only slightly, even in comparison to the many aborted projects of his career) the book proves to be infinitely readable and hard to put down. In spite of its title, Roger Waters The Man Behind The Wall is actually more of a long-form (and well-written) research paper on Pink Floyd and its many members with the most weight undeniably given to Roger Waters himself, even though the stories are not always told from his point of view or with his sympathies at heart. Each major character in Waters’ life is given their own biographical treatment so that we understand our main character and his actions and reactions all the better.

Roger Waters The Man Behind The Wall also features discography, bibliography, notes, acknowledgements and a thorough index. The most valuable “bonuses” the book sports are the two eight page glossy photo inserts from the Pink Floyd and solo years. Naturally, the main attraction is the prose itself and Thompson takes no easy paths in his exposé of Waters. Waters is a massively complex man. It takes a very complex writer to capture this much and to shine light on what we admire and dislike about this musical genius. Thompson here proves that he is the right man for the job.