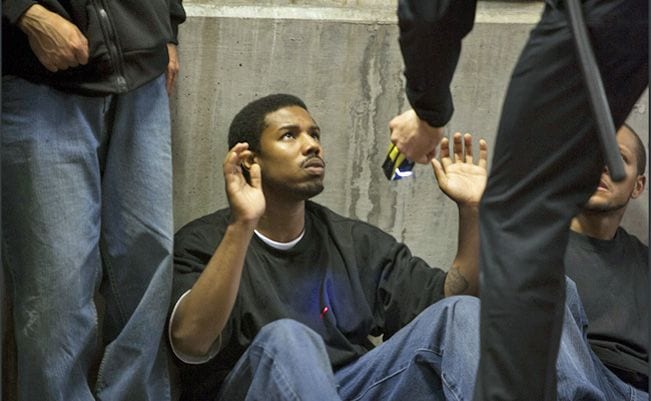 The best art usually forces us to face our flaws. In the case of Fruitvale Station (2013), Ryan Coogler’s excellent debut, we are challenged to confront our seldom spoken tendencies to judge a situation without knowing anything about it, and to consider the possible repercussions of those judgments. The film recreates the last day of Oscar Grant III (Michael B. Jordan), a 22-year-old African-American male, before he was gunned down by a BART police officer on 1 January 2009.

Those who claim that race is no longer an issue in America are wrong. Michelle Alexander calls attention to the inequities between whites and blacks in her eye-opening book, The New Jim Crow: Mass Incarceration in the Age of Colorblindness. As Alexander writes:

What has changed since the collapse of Jim Crow has less to do with the basic structure of our society than with the language we use to justify it. In the era of colorblindness, it is no longer socially permissible to use race, explicitly, as a justification for discrimination, exclusion, and social contempt. So we don’t. Rather than rely on race, we use our criminal justice system to label people of color “criminals” and then engage in all the practices we supposedly left behind. (2012, 2)

Alexander raises numerous thought-provoking claims about the American justice system and how it is supposedly designed to maintain a social and cultural hierarchy between whites and blacks in which African-Americans are systematically treated as second-class citizens.

Fruitvale Station makes it clear that Oscar Grant is a product of this unfair justice system. In the film’s only flashback scene, we learn that Grant was incarcerated in 2008 for drug dealing. Grant is visited by his mother Wanda (Octavia Spencer), and an intimate conversation between a mother and son is destroyed when Grant is distracted by a fellow inmate and subsequently starts a fight with him. In this moment, Grant comes off as a selfish, arrogant, and short-tempered young man who still has much to learn about life.

Aside from this harrowing flashback, however, Fruitvale Station focuses on the final day in Grant’s life, and here we are ultimately presented with a young man who struggles to reinvent himself after his prison sentence. By simply showing Grant’s daily struggles to care for his girlfriend Sophina (Melonie Diaz) and daughter Tatiana (Ariana Neal), obtain employment, and stay out of trouble, the filmmakers demonstrate how difficult it is for a young African-American male with a criminal record to rebuild his life. Even with the best intentions and a loving and supporting family, the cards are stacked against him.

This does not mean that the film deifies Grant. Rather, he is depicted as a complex individual who has much to learn about life. In one scene, for example, Grant returns to a job that he was fired from weeks earlier for showing up late in an attempt to get a second chance. He is not given one, and although we sympathize with his plight, we also realize that Grant is partially responsible for this in the same way that he is responsible for his incarceration.

This brings us to Fruitvale Station‘s greatest strength. As the film progresses, we are offered brief glimpses into a man who lives on the fringes of society. His girlfriend works at Walmart to support their daughter, and his sister similarly works at a fast-food chain to survive. His father is absent from the picture, and his mother is the glue that keeps the family together. Grant has made his share of mistakes and poor decisions, but none of this, the film argues, justifies his murder.

There are moments in the film that are difficult to watch. They should be. Grant’s life was tragically cut short and although Fruitvale Station is not a pleasant experience, it is a necessary one. The performances by Jordan, Spencer, and Diaz are nothing short of spectacular. Jordan, who has made brief appearances in The Wire and Friday Night Lights, gives a star-making performance as Grant. Diaz, who delivered a scene-stealing performance in Raising Victor Vargas (2002), is a revelation as Sophina, and her work in the film’s final scenes is riveting. Finally, Spencer tops her Oscar-winning performance in The Help (2011) as Wanda, a loving mother who only wants the best for her son.

Coogler is the film’s writer and director, and Fruitvale Station marks one of the greatest debuts in cinema history, akin to Mike Nichols’ Who’s Afraid of Virginia Woolf (1966), John Singleton’s Boyz n the Hood (1991), Sam Mendes’ American Beauty (1999), and Sarah Polley’s Away From Her (2006). This is the work of a confident artist in control of his craft.

In addition to this powerful film, the DVD offers two insightful special features that should be of interest to moviegoers. One is a documentary about the making of the film and the other is a Q&A with the cast and filmmakers. The documentary, while brief, traces the film’s conception, and we learn how it was made, how its players got involved, and ultimately what attracted individuals to Grant’s story in the first place. For example, Coogler, a graduate from the USC School of Cinematic Arts, grew up near the Bay Area where Grant lived and felt a strong connection to the material, acknowledging that his fate would have been similar to Grant’s under different circumstances.

The Q&A is equally as informative, mostly because Bay Area journalist Davey D asks pertinent questions. However, the features focus more on the filmmakers’ intentions and less on Grant himself, and those looking for an in-depth investigation into Grant’s life might be disappointed.

Throughout Fruitvale Station, Coogler asks us where we draw the line between racism and responsibility. To what extent is Grant responsible for his life, and to what extent is he a product of a larger culture and society that thrives and survives on the institutional racism against African-Americans? To what extent is he a selfish, arrogant young man, and to what extent has the American justice system conditioned him to be this way? Is his shooting the result of a racist cop, or is it the result of chaos, confusion, and the irresponsible behavior of a police officer who should have received proper training?

These questions are asked by Coogler but they are not easily answered. This is why Fruitvale Station demands to be seen and discussed. It takes a real-life event about which we’ve all decided we know everything and shows us the limitations of our presumptions. The shooting of Grant is a story ripped from the news, but a human life cannot be summed up with a sensationalist headline. Life is complicated like that, and so is great art.