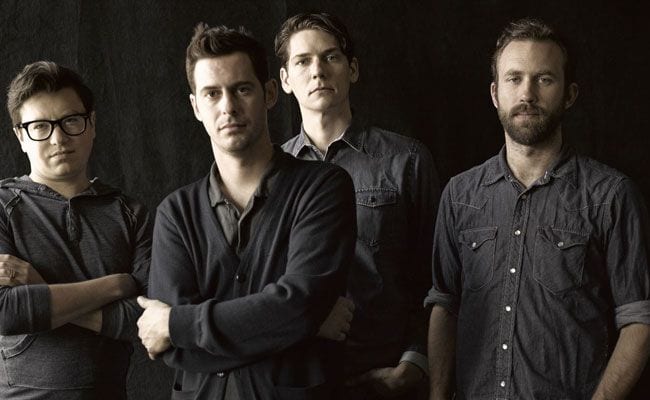 There’s a handful of cities vying for the title of best American music scene these days and the debate can be fierce. Such an honor depends on several factors, mainly the quantity and quality of live shows taking place, as well as the quality of venues for staging these shows. Then there’s the overall quality of life and the caliber of local bands coming out of a given scene. Austin, Texas ranks highly across the board and has received an extra boost in the latter category from the emergence of genre-blending rockers White Denim.

The band have been winning raves in Austin since their formation in the mid-aughts and have seen their national star rise since the release of 2011’s D album, followed by tours opening for bands like Umphrey’s McGee and Wilco. 2013’s Corsicana Lemonade provided another strong batch of new material. A California run hitting classic venues like San Francisco’s Fillmore, Los Angeles’ Troubadour and the Casbah in San Diego in early February helped cement White Denim’s status as a buzz band that has arrived.

The Casbah can’t quite compare with the timeless vibes at legendary venues like the Fillmore and the Troubadour, and it’s part of why the San Diego music scene still ranks a distant third in California. It seems downright unfair how a town like Austin has so many great little rooms for bands to play and San Diego has hardly any. But the Casbah does have some grungey character and recently celebrated its 25th anniversary of hosting the latest alt-rock buzz bands from around the country. White Denim sold out the 300-capacity venue well in advance, testament to that burgeoning buzz.

Originally formed as a trio by drummer Josh Block, bassist Steve Terebecki and guitarist James Petralli, White Denim evolved their sound with the addition of second guitarist Austin Jenkins in 2010. The dynamic quartet can rock your socks off, but their sound is hard to categorize with its blend of prog-rock riffage, fuzzy blues, Southern soul and melty psychedelia. The new album features some production collaboration with Wilco’s Jeff Tweedy, although it often sounds like it could have been produced by Dan Auerbach from The Black Keys with its emphasis on a raw bluesy sound.

Is Corsicana Lemonade tighter than D? Maybe. Does it have as diverse a sonic landscape? Maybe so, maybe not. The band also put out the somewhat overlooked Last Day of Summer in 2012. Three albums in three years is a prodigious output by 21st century standards, and White Denim are clearly a group out to seize the moment. Tweedy encouraged them to record live in the studio and the band members say this has helped tighten their live performances in general.

It was tough to find any elbow room in the Casbah’s tight confines early on in the show, but things loosened up a bit with “River to Consider”, one of the band’s jammier tunes from D. The song features some hot lead guitar and an infectious latin-esque groove that got the crowd going, especially when it evolved into a turbo-charged jam that felt influenced by the Grateful Dead’s “Fire on the Mountain” and/or Phish’s “Reba”.

“Regina Holding Hands”, from 2009’s Fits, provided a change of pace in the rocking set, with an R&B inspired groove that conjured visions of Marvin Gaye, Lenny Kravitz and the Rolling Stones. The new “At Night in Dreams” found the band delivering a blast of high energy guitar riffage that sounded like it could have come out of the early ‘70s if Deep Purple’s tour bus had run into ones carrying Aerosmith and Thin Lizzy. “Drug”, the band’s lead single from D, was another highlight with its melodic psychedelia and amped up riffs blending into a gloriously sublime yet raucous romp.

Petralli and Jenkins are accomplished guitarists, but Terebecki is the man who gives White Denim their X factor. With a superbly warm tone provided by his ever trusty Rickenbacker, Terebecki’s dynamic bass playing goes well beyond the standard rock formula to elevate nearly every tune to a higher level in the live setting. Add in Block’s adventurous drumming and the quartet conjures a live sound that delivers an extra impact which the albums can only allude to.

The new “A Place to Start” found the band dialing the volume down at first for a reflective mid-tempo breather. But the song’s melodic counterpoints grew in energy to become one of the night’s hottest jams, something barely hinted at on the album. Such jamming was the exception rather than the rule at the Casbah though, providing a tantalizing tease to fans drawn to that aspect of the band’s talent.

It could be great to see White Denim push the jamming envelope a bit more since their set was only about 90 minutes. Yet at the same time, they bring a higher level of improvisation to the indie rock scene than most fans of that genre are used to. In this way, White Denim are carving out a niche all their own as a bridge between the indie rock and jam rock scenes.