When you mention the name Lars Von Trier, you get a decidedly diverse set of reactions. Many mainstream film fans have no idea who he is. They’ve never seen his work, perhaps could name check a movie or two they’ve “heard” about, and are perhaps better versed in his various recent tabloid tales than anything he’s done on celluloid. Others may be a bit better informed, mentioning his no-frills filmmaking ideal Dogme ’95 or his controversial Cannes outbursts. On the other hand, it will be the rarified cinephile who can walk through the man’s output over the last few decades, delineating his output in both specifics and subtextual generics. Indeed, Von Trier is that kind of artist, an auteur with a singular vision that occasionally gets carried through (and away) within stark expressions of his own personal complexities. He doesn’t shy away from the difficult or the contentious, but he does occasionally let it do too much of the talking.

With the arrival of his latest, a sex-filled saga of psychological dysfunction also known as Nymphomaniac (or Nymph()maniac Vol. 1 and 2), we thought it would be time to illustrate our love of the clearly creative (and contentious) filmmaker by picking the 10 best examples of his creative output. Granted, there is only 13 features, one documentary, two TV mini-series, and some shorts to deal with, but on the upside, when Von Trier is great, he’s gobsmacking. In fact, he may be one of the most consistently amazing moviemakers out there today. Sure, he’s also incredibly divisive, with just as many hating his output as celebrating it, and you have to get around his often elusive ideologies in order to appreciate his art and approach, but when you consider the number of adored filmmakers who can’t offer up a single significant film, let alone 10, you start to understand our Von Trier appreciation. He may be a rogue, but he makes great films, beginning at the beginning, more or less: 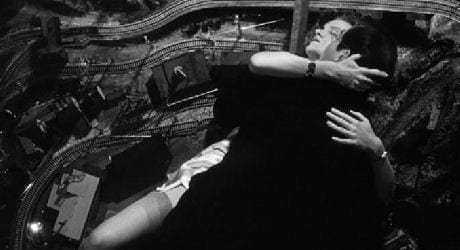 As he would do with his far more impactful Dogme ’95 style, Von Trier played with the rules of the cinematic artform for this tale of a young American struggling to “bring happiness” to a post-WWII Germany. After becoming a conductor for the sleeper car of a train, he falls for a woman, and a pro-Nazi plot, but instead of playing out in a traditional manner, Von Trier goes highly experimental, including rampant use of rear-projection as well as subtle transitions between monochrome and color elements. While some argued style over substance, it all has a power that’s unique to the filmmaker’s creative output.

After the international success of Breaking the Waves, Von Trier decided to head full bore into his Dogme ’95 manifesto, making this weird little comedy as a result. Shot entirely on digital cameras and eschewing all the production perks the moviemaking treatise mandated, the end result plays out like an arthouse Jackass. A group of “anti-bourgeois” adults decide to find their “inner idiot” by acting developmentally disabled in public. Naturally, things get taken a bit too far, leading to all manner of misunderstandings and personal pitfalls. As humor, it’s an acquired taste. As proof of Von Trier’s talent, it’s excellent.

As part of the director’s planned “USA – Land of Opportunity” trilogy, this film suffers from a surreal stunt which gives the entire production a patina of falseness. Nicole Kidman is a woman on the run from mobsters who holes up in the title town, trading manual labor for protection. The problem? There is no town, just a bare stage set with chalk outlines and indications where doors and walls should be. Again, Von Trier enjoyed experimenting with the prerequisites and perils of cinema. In this case, however, a powerful story is marred by a rather meaningless visual gimmick.

In this incredible documentary, Von Trier challenges one of his favorite filmmakers, Jørgen Leth, to remake his favorite film of his, The Perfect Human, within a quintet of artistic and aesthetic challenges, including 12 frame shots, use of the worst place on Earth as a backdrop, and via cartoon. At first, his collaborator seems eager. But once he (and we) learn that film is more than just changing locations or visual approaches, it becomes obvious that Leth dislikes Von Trier’s premise. The result is one of the most telling expressions of the complexities of creativity ever.

Otherwise known as Riget (and remade by none other than Stephen King as Kingdom Hospital), this amazing TV mini-series about a haunted Danish medical center became many a mainstream film fan’s first real introduction to Von Trier’s work. While controversial (a Greek Chorus of dishwashers with Down’s Syndrome is usually the target of protest), it was sold as a scary movie experience, especially in those days where rental outlets were looking for anything to drive in-store traffic. Telling a tale about how the supernatural steps in to guide and confuse the intelligent and scientific, it stands as a solid piece of genre jerryrigging. 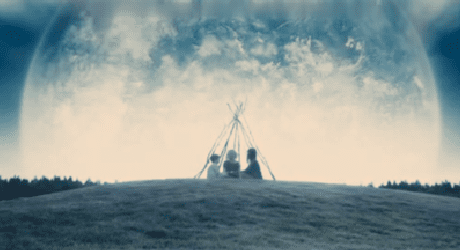 Having battled depression most of his life, Von Trier used a personal episode to help create the main narrative thread here. A pair of sisters, Kirsten Dunst and Charlotte Gainsbourg, must deal with their lingering sibling issues just as the End of the World is announced. When the former becomes nearly catatonic from psychological stresses, the latter tries to rally her for fear of the approaching apocalypse. Instead, she learns what Von Trier learned — that is, that sometimes, the mentally impaired are the most calm and comforting force within the midst of chaos. It’s a very moving message and movie.

Sex sells. Everyone knows that. So why not use it to put forth a rather complicated commentary about love, life, decisions, and desperation? That’s exactly what Von Trier has done with his latest masterpiece, a messed up diatribe about human foibles situated within some very hardcore XXX content. Ms. Gainsborough is back, here taking center stage as the title diva, a woman convinced that her inability to control her lust has made her a wicked person. Over the course of its two part explanation, we learn that she is no different than anyone else, except she is honest in her inadequacies.

As the third installment in his “Golden Heart” trilogy (the man loves trilogies), Von Trier brought on musical icon Bjork to aid in his creation of a musical. That’s right, he taps into his inner Busby Berkley (albeit, within the Dogme designs) to tell the tale of a young Czech immigrant who comes to America with her son. She is going blind and hopes to raise enough money to keep her child from suffering the same fate. Slipping into daydream — read: songs — she tries to forget her tragic fate. Then a horrible misunderstanding leads to one of the most brutal finales ever. A true artistic triumph.

We place this slightly above Dancer for one reason and one reason only – the singular moment when Willem Dafoe’s character runs out into the woods and is confronted by an anthropomorphized fox, disemboweling itself and growling “Chaos Reigns!” Otherwise, this matches our third choice in both chutzpah and horror. Really a meditation on how grief — especially the loss of a child — can affect each parent differently, Von Trier turns everything into a literalized psychological confessional, complete with genital mutilation and biological brutality. The opening set-up remains some of the most brilliant filmmaking of the man’s career.

At the end of the day, this will be the movie Von Trier will be remembered for. It contains one the greatest performances (by Emily Watson) by any actress he has worked with and a story with a moral that makes up for the numerous narrative and aesthetic oddities the filmmaker employs. After all, the main theme of this film is about serving God through having sex with strangers. Even more bizarre is the notion that said sacrifice may actually work. While not 100% in compliance with his Dogme ’95 ideals, it remains a stunning masterpiece which proved greatness could indeed come from less frills and more “film.”