He’ll be back on the silver screen this weekend in an oddball amalgamation of drug cartel crime thriller and murder/mystery whodunit entitled Sabotage, but the fact is that Arnold Schwarzenegger never really went away. Even while serving two terms as Governor of California, his legacy shifted while staying most ingrained in moviegoer’s hearts. After vowing a return to his previous place in the pop culture lexicon, he’s tried teaming up with other past action heroes (The Expendables 2), doing a duo piece with an equally ‘relevant’ rival (Escape Plan with Sly Stallone) and even going back to his “one man vs. many” mainstay dynamic (see below). In each case, new generations have mostly ignored this once celebrated superstar, leaving those of us in the outskirts of the biz wondering why this former box office behemoth has lost his way. That got us looking back at his past catalog and, suddenly, it all became clear. When he was on, there was nobody better. But that was then, and this is now.

That’s why we’ve decided to rank his best efforts in front of the camera. As with most of our lists, there needs to be a few caveats. First, we are only concentrating on those films where Arnold was THE STAR. No cameos or extended supporting roles were considered. Next, we’ve avoided all the comedies. The title — suggesting this collection’s focus on “action” — should be FYI enough. Finally, placement is the result of a recent revisit, not nostalgia from the past. Sure, Commando kicked ass about 25 years ago, but some of its elements may not have aged all that well. In any case, this is what we’ve come up with, the 10 best Arnold Schwarzenegger action films of all time. While he continues his comeback, rebuilding his brand after almost a decade off the big screen, it safe to say that there never has been, and will never again be, a cinematic force as powerful as this Austrian anomaly. From a steroid using bodybuilder to a mainstream movie icon, this is one fluke that’s found a firm place in Hollywood’s history. 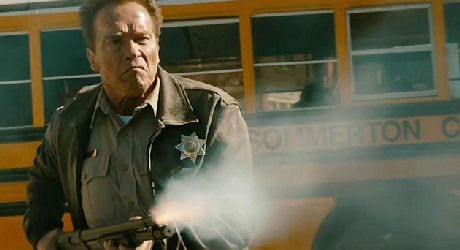 Last January 2013, Arnold’s comeback began in earnest. Sure, he had an extended bit part in Expendables 2, but this was the real return to form. Under the directing dynamic of South Korean superstar Kim Jee-woon (I Saw the Devil, The Good, The Bad and the Weird), Schwarzenegger was excellent as a small town sheriff being advised on the arrival of a vicious drug lord (Eduardo Noriega). With his ragtag group of deputies and interested citizens, he steps up, High Noon style, to take on the baddie and his brigade. While not perfect, this captured the glory that was Ah-nold in the ’80s, and that’s all that matters.

For this supposed flop that became a bad movie benchmark, time has been more than kind. In fact, it’s safe to say that this remains one of our former superstar’s best efforts. Satiric, sly, and stuffed with meta material, it shouldn’t have suffered from such bad press. But in an era where word of mouth could be generated and controlled by an all powerful media, Schwarzenegger was buried for taking on such crafty comic material. For his Hamlet spoof alone this movie is a must-see. The rest is a rollicking reminder of all the iconic tropes this massive movie star was responsible for.

If there is a film waiting to be rediscovered in Arnold’s pre-politics canon, it’s this gritty mob thriller directed by John Irwin (The Dogs of War, Hamburger Hill). In it, our hero plays a former FBI agent, now disgraced, who hates his life as a small town sheriff. When given the chance to help out the agency with a bit of mafia-based revenge, he can’t wait to sign up. Consider where it came in his creative canon (between Commando and Predator), it’s easy to see why audiences and critics were a bit let down. It’s actually a very good film.

John Milius didn’t just make movies. He made cinematic statements. When given a chance to bring Robert E. Howard’s pulp character to the big screen, he turned its dime novel designs into wonderful delusions of grandeur. It was the perfect role for Schwarzenegger, who was still learning the ropes of movie stardom. He became the warrior stud, a man made of muscle and brawn hellbent on forging a world in his own violent image. While many were critical of the film at the time — as is almost always the case with Milius — it’s now a true cult classic.

Where it all began, really. Fresh off the freak show Conan sequel (featuring Grace Jones and Wilt Chamberlain???), James Cameron dumped potential T800 OJ Simpson (???) for the equally less impressive acting chops of the former Mr. Olympia. The rests, is cinematic history, a franchise still going strong 30 years later. Arnold is excellent as the robot assassin from the future back to kill Sarah Connor and solidify Skynet’s overthrown of the human planet. With limited dialogue and a body that screamed unnatural, the bodybuilder became this badass, a true sci-fi icon and one of the movies most memorable all time villains. 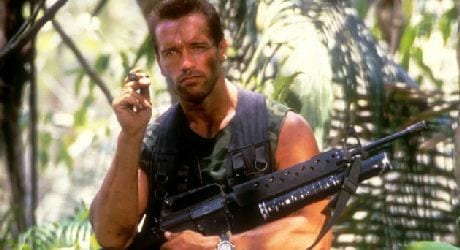 How do you take on someone whose unlike any real person on the planet? Easy, give him a skilled extraterrestrial hunter as a foe. Schwarzenegger was at his peak of late ’80s power here, and it shows. He’s rough and tumble during the opening military material and then turns into a one man killing machine once the title terror makes its presence known. That last act confront, with Arnold basically battling a oversized special effect, remains one of the most underrated action sequences in any of his movies. When future fans want to know why many consider him such a badass, this and our choice at number four will answer any and all questions.

This is the non-Terminator Arnold blueprint movie. Rugged ex-something or other is brought back into the world he left behind when his daughter is kidnapped. Taking on the challenge of beating the bad guys, our star quips and rips apart the enemy with a style so solid it’s probably made of Carbonite. Along with way, he picks up a sidekick (Rae Dawn Chong), escapes from a plane in mid-liftoff, and goes “shopping” in an armaments store in a sequence that has to be seen to be believed. Thanks to Mark L. Lester’s direction and the gory cartoon violence, Commando lifted the wannabe actor into the stratosphere and he never came down.

After the blistering, ballsy first film, many wondered where creator James Cameron would take this material. Thanks to the invention of CGI and the ongoing stardom of his lead, the answer was anywhere he wanted. This sequel far surpasses anything done in the original, modifying both the mythology and the visualization of same to give us a liquid metal version of the title monster and a good guy T800 looking to protect, not kill, John Connor. One of the greatest action and/or genre films ever conceived, Cameron proves that there is nothing like well choreographed stunt work, and a well told story, to carry audiences away to another cinematic world.

What happens when a larger than life director teams up with an equally outsized superstar? Wall to wall special effects, more action that you can shake a stick at, and glass shards flying everywhere. Paul Verhoeven’s take on Phillip K. Dick’s VR allegory is nothing sort of insane, complete with Martian artifacts, three breasted mutant prostitutes, and an activist named Kuato whose… well, trust us. You just have to see “it” to understand. Sure this movie is like an adrenalin rush on crack and Arnold is often upstaged by Rob Bottin’s brilliant make-up F/X, but the results is pure escapist bliss, hyperactive and totally terrific.

Want proof that Arnold could actually fill the role of mainstream action man ala James Bond? Look no further than this fascinating effort between the star and his favorite filmmaker, James Cameron. Using the constant threat of nuclear proliferation and the now incendiary role played by the Middle East, the duo dreamed up the story — with the help of a French film named La Totale! — of a seemingly mild mannered family man whose actually one of the CIA’s best and brightest. When a radical threatens the US with nukes, it’s up to our hero, his hefty sidekick (Tom Arnold) and, eventually, his actual wife and child (Jamie Lee Curtis and Eliza Dushku) to try and save the day. A total triumph from beginning to explosive end.