Like January and February 2014, March and April proved to be strong, if not stronger, months for metal releases. As far as the Album of the Month goes for March, it was a head-butting tie between the remorseless doom that Conan brought down upon us on their second studio album, Blood Eagle, and the rapid evolution shown by Morbus Chron on Sweven. Both albums — although totally different in sound, style and overall objectives — are powerful arguments against naysayers who either believe that there’s no scope left in terms of what can be done with doom and those who still (stupidly) think that young bands experimenting with the formula that brought them attention (in Morbus Chron’s case, death metal) are fatally foolish.

April’s Album of the Month lands between the statuesque sounds of Behemoth’s The Satanist and Triptykon’s Melana Chasmata: Contradiction by Basel, Switzerland’s Schammasch. Schammasch have made a monumental creative leap on their second studio release, the 80-minute double-disc Contradiction. A work of vast scope and supreme execution musically, conceptually and visually speaking, Contradiction spans many sub-genres from death and black metal to doom and progressive metal, and beyond extremity into ’80s goth rock and neo-folk. Such genre labels and the comparison to two metal bands held in high esteem are not detailed to simplify the artistic merit or devalue the individuality of Schammasch, however; but more to stress, stylistically, the kind of company this little known band outside of Europe’s metal underground now keep. The upper echelon now has a new beast to feed at its table.

In terms of the rest of March and April’s metal releases, Mixtarum Metallum IX is consumed by ten other deadly albums chained, or loosely chained, to metal’s monolith. 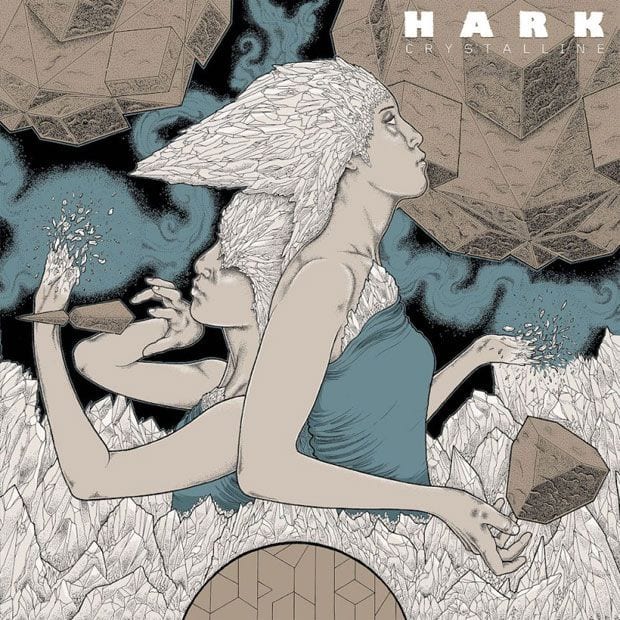 The Welch sludge power-trio Taint left a massive hole when they decided to call it quits after their final release, 2010’s All Bees to the Sea. However, the force of the riff refused to relinquish its grip on guitarist/vocalist Jimbob Isaac, as he has now made his full-length return with his new band HARK (the band is completed by ex-Whyteleaf bassist Nikolai Ribnikov and drummer Simon Bonwick). HARK’s debut album, Crystalline, prowls around the same sludge-sodden terrain as Taint, with its monstrous rolling riffs bucking and stomping their way across the album’s 56-minute run-time. Not only that, there is the same progressive urges that individualized Taint slow-burning in the background, not to mention a vicious noise-rock streak that pokes its head out during songs like “Black Hole South West” and “Breathe and Run”. Angular riffs, huge grooves, throaty shouts and knotted rhythms all tangle and find room to roar thanks to Kurt Ballou’s signature production job. The result is a debut album from veteran riff-smith that stands up to anything his celebrated former band ever created.

Animals As Leaders
The Joy of Motion (Sumerian)

When a new sub-genre rises you always get frontrunners who become restless because of the stigma the sub-genre places around their necks. These artists make it their goal to separate themselves from the bland bandwagon-jumpers and in the process of doing so they generally tend to create their best work. Animals As Leaders have done just that with their third album, The Joy of Motion, and consequentially the band led by virtuoso guitarist Tosin Abasi have further distanced themselves from djent and its banal bands raiding Meshuggah’s bunker of b-sides. Abasi’s supreme talents again dictate the entirety of The Joy of Motion, yet his extensive musical ability is never at the expense of the songs. With a guitarist who can do it all you need equally dexterous musicians to add stability, and Animals As Leaders are stacked with the talent required to push progressive metal into the future. If they continue to develop their song-craft and refrain from leaning on the (now) clichéd Meshuggah-isms, they may even go on to define their own genre some day.

A musically vile and thematically controversial album, Lord Mantis’s Death Mask has created quite an amount of noise online for all the wrong reasons. But what the commentators seem to be missing is that this album is painfully focused inward, with Charlie Fell’s (vocals, bass, lyrics) loathing directed at his own self. Outside of its shocking album cover and its, at times, terrible choice of words, the music of Death Mask is where his self-loathing is most clearly conveyed. Every destructive riff, pneumatically powerful beat, and bleak scream is laid down with hatred and disgust — it’s so real that you can’t relax for one moment. From the statement of brutality that is “Body Choke” through to the mechanical malice of “Possession Prayer” — which sounds like Godflesh covering Times of Grace — and the no resolution ending of “Three Crosses”, Death Mask will offend and make you squirm in your seat… but you dare not look away. This is as extreme as it gets.

The Oath
The Oath (Rise Above)

The Occult Rock Renaissance that has been in full Satanic swing since The Devil’s Blood dropped Come, Reap in 2008 isn’t far off saturation point. At present, we’re smothered by bands professing a deep dedication to the Occult and a fanatical adoration of Coven, Mercyful Fate and Pentagram. But interestingly, the quality of the material has yet to dilute, and with bands like the Oath appearing with their tantalizing blend of doom ‘n’ garage rock and disappearing as fast as they materialized, it seems we’re nowhere near creative collapse. Smokey, sultry and entirely legit, the Oath’s self-titled debut for Rise Above oozes sex appeal and effortless cool from every pore. The blonde-bombshell pairing of guitarist Linnéa Olsson and singer Johanna Sadonis — backed by Kadavar bassist Simon Bouteloup and drummer Andrew Prestidge — have a keen ear for classic-sounding vocal melodies and a simplistic yet memorable guitar hooks, and it is this bare-bones approach to songwriting along with the aforementioned attitude that defined the band’s short existence. The Oath’s recent break-up will undoubtedly add to their cult status.

The death metal legends who were buried in filth for 15 years have, surprisingly, become a prolific band since they permanently reunited in 2010. Tourniquets, Hacksaws and Graves, Autopsy’s third album since 2011’s Funeral Macabre and second studio album in a year sees drummer/vocalist Chris Reifert and Company in disgustingly great form. Everything we’ve come to know and love about Autopsy remains dead-set in place: the creepy-crawl of the sludgy death metal riffs (this time with chunks of blues), the cavernous sounding and loosely played drums, and Reifert’s maniacal approach to purging his own larynx. While some of Autopsy’s songs since their resurrection have been too long in the rotted tooth, these twelve songs tighten around your neck until your eyes bulge and pupils bleed out. There are few sounds as fascinating as a veteran act on the top of their game long after the release of what critics and fans deem as their “classic material”, and like Cannibal Corpse and Carcass, Autopsy continue to exist outside of trends. Studio album number seven is another lesson in death metal grotesquery from one of the genre’s greats. 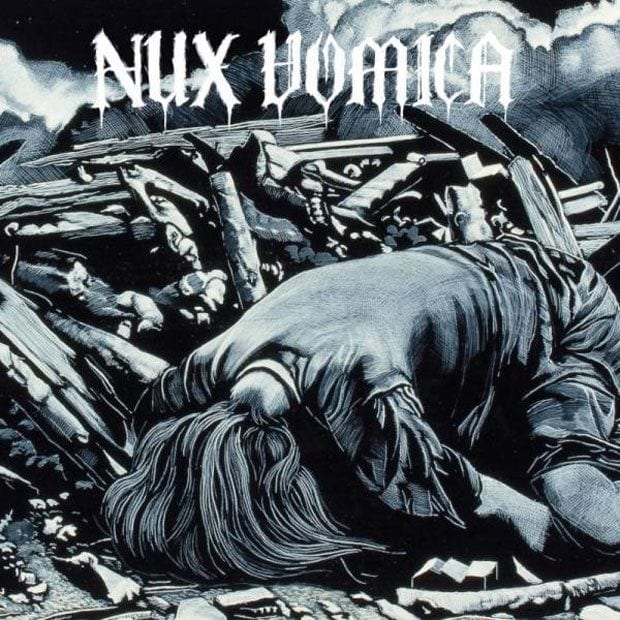 The boundaries between metal sub-genres continues to dissipate because of artists like Portland, Oregon’s Nux Vomica, who twist crust punk, black metal, post-metal and every extreme imaginable to suit their selfish desires. The band’s self-titled debut for Relapse (third overall) is a three-song affair that exceeds all expectations. Refusing to be pigeonholed into one genre, like Cormorant (see: below), Agrimonia and Anciients, Nux Vomica’s control over and distillation of their influences into a sound that’s fresh as it is furious, is impressive in both its expanse and implementation of ideas. Politically charged and brilliantly titled, “Sanity is for the Passive” relies heavily on the band’s crust origins before opening itself at its core to reveal something else entirely; “Reeling” toys with post-rock only to discard it as the song continues to evolve itself; and the 20-minute “Choked at the Roots” builds and falls without ever landing on clichés. It’s inspiring to hear a band with such potential prove a point on an album that will undoubtedly give them the break they’ve been so ravenously hounding.

Thantifaxath’s tongue-twisting name has been whispered in underground circles since the release of the anonymous Toronto band’s eponymous debut EP in 2011. Not content to languish inside black metal’s second wave tropes, Thantifaxath takes their cues from Voivod’s riff-weirdness, Deathspell Omega’s hellscapes, and other experimentalists in and outside of black metal’s avant-garde. A nightmarish collection of songs, Sacred White Noise is perverse in its disorientation: ear-piercing riffs run nauseatingly down the spectrum of atonal to melodic and drums see-saw between blasts and sickening swings. It’s a distinctive and imaginative sound, one that an unknown voice screams over at the most opportune of times to add to the aural disarray. There’s also plenty of depth to the music that hints at further experimentation down the line. But for now, there is enough here to keep you retching and revelling in the demented music this cloaked trio have conjured from the netherworld for a couple of years at least.

“The goal is to create music that challenges and stimulates our mind and body in a new way,” explained Taurus of their creative process when I interviewed the band recently. The duo of Stevie Floyd and Ashley Spungin also has an innate ability to challenge and stimulate the physical and mental limits of their listeners on their self-released debut, No/Thing. An experimentally daring yet focused album traversing doom, death, krautrock and drone, with seething repetition and spoken word samples adding tangible terror, No/Thing is one of the most unique and exciting debuts you’re likely to hear this year. Recorded to tape by Billy Anderson, and with Jef Whitehead (“Wrest”) providing wicked guest vocals on the free-form finale “Receed”, Taurus have been meticulous with the songwriting, lyrical themes, production, and overall packaging of their first album. A band who care about the totality of art: Taurus’s music is spiritual in nature and worthy of the divine.

Following the critical acclaim afforded to Cormorant’s surprising second album Dwellers would trouble lesser bands. But the San Francisco boundary-blitzers have created another album of steeped in US black metal and transformative in its progressiveness. Even more impressive is the fact that Cormorant have achieved such coherency and high standards on Earth Diver without vocalist/lyricist/bassist Arthur von Nagul, who left the band at the tail end of 2012. Past fans of Cormorant who deem the band dead after von Nagul’s departure cannot baulk at songs as Cormorant-esque as “Waking Sleep” — or in fact any of the other songs on this album, as Cormorant bombshell the listener with every twist and turn just like they did before. Whether it’s the space of the sweeping “Broken Circle”, the deep funk of “The Pythia”, or “Mark the Trail”’s metamorphosis from extreme metal to classic rock, Earth Diver plays out just as fascinatingly as its predecessor. There’s plenty of life left in this bird of wonder.

A respected pillar of American doom metal, Thou’s prodigious approach to recording music has not weakened the high levels of emotion that feeds their creativity. Transferring genuine emotion into music is not something one can learn — and very few bands can cut to the quick and leave the listener a quivering wreck. Like Neurosis and Warning before them, Thou inhabits this rarefied space. On their latest album, Heathen, the Baton Rouge five-piece have unexpectedly managed to increase the intensity and emotive force of their dark music while continuing to experiment with the time-tested tenets of doom. Acoustic passages and other interesting embellishments outside of the punishing riffs (of which there are many) add further profundity to Heathen, while vocalist Bryan Funck’s lacerating scream is aimed at your gut and heart simultaneously. Funck’s lyrics, once absorbed, lend a final layer of gravitas to what is a painfully cathartic and thoroughly rewarding listen from its beginning to its bitter end.