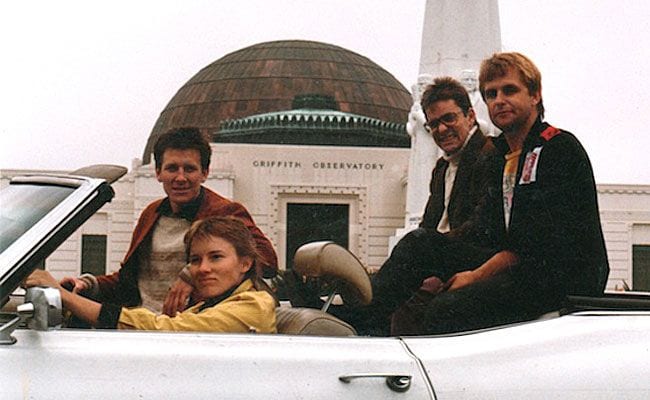 Captured Tracks has been working with Flying Nun for a while now, reissuing vital records from the golden days of that seminal New Zealand label. Of course, the more they reissue, the more we realize that the golden days of Flying Nun have basically never stopped since the label began in 1981. The latest release in this reissue campaign is also one of the most important. The Bats, another offshoot of the Clean, was started by the Clean’s bassist Robert Scott after that band split around 1982. He assembled the band with ex-Toy Love bassist Paul Keen and players Kaye Woodward and Malcolm Grant. Volume 1 assembles the band’s early EPs on Compiletely Bats, as well as the band’s first two proper albums, 1987’s Daddy’s Highway and 1990’s The Law of Things. Assembled together, these albums make a convincing argument for the Bats significance to the history of Kiwi-pop and indie rock more widely.

Like the Clean, the Bats took a long time to make their first full record. They spent much of the mid-’80s recording in short bursts. Compiletely Bats, originally released in 1987, collects the band’s first three EPs, At Night, And Here Is… Music for the Fireside, and Made Up In Blue. Oddly enough, the set doesn’t present the releases in chronological order, but that decision pays off. The set leads off with the sweet melodies and deeply embedded, shimmering hooks of “Made Up in Blue”, one of the finest songs on the collection. The sweet curl of Scott’s voice rings out, and in this song we get the blueprint that the Bats followed to great success on much of their record. The guitars jangle, and the vocal harmonies are simple but effective, and there’s a propulsion here but also a faint melancholy.

Compiletely Bats features a number of highlights from the band, including the dusty “Blindfold” and the chamber-pop leanings of “Jeweller’s Heart”. The earlier stuff, including much of At Night, still feels fledgling, and if lush textures became a staple of The Bats’s sound, that is a bit lost on these more lo-fi early recordings. But there’s a consistency here that is undeniable and reveals the creative burst Scott had coming out of the early ’80s run of the Clean. The bonus tracks here flesh out that early picture of the band, including At Night‘s “Earwig”, which was left off the original edition. The best extra cuts here are “Calm Before the Storm” and “Candidate”, both hidden gems from the “Block of Wood” single. There are demos that show a bit of the process for these songs, but they don’t add much else to an otherwise solid set.

Compiletely Bats was released in 1987 to set up the Bats’ first full album, Daddy’s Highway, which followed later in the same year. Volume 1 gives this album its own disc with no bonus cuts added on. That kind of reverence is well earned. The band clearly cut its teeth on those EPs, and as a result Daddy’s Highway became (and remains) their finest album and most clear musical statement. “Block of Wood” starts the record off with a bleary-eyed ripple of guitars. “It doesn’t look good / And I’m feeling like a block of wood,” Scott declares, and if the building guitars try to fight against the malaise, they also manage to accentuate it in a striking way. The distant worry of this song continues throughout the album, from the moody shuffle of “Mid City Team” to the subtle edge of “Treason” to the brilliantly soft layers of closer “Tragedy”. Alastair Galbreath adds violin to these tracks, and his brooding playing adds a beautiful layer to these tracks.

The album ends on a gloomy low hum, but despite the blue artwork and lilting nature of these songs, the Bats were as much about shifting sadness into pop transcendence as they were about crafting melancholic tunes. Scott feels unhinged by emotion but in control as a musician on Daddy’s Highway, and the band follows suit. The album doesn’t change its elements — or even really veer from the elements on the EPs — but there’s still a subtle variety in the way hooks get buried in the tracks, in the way melodies pull apart and stretch. If the Bats were a more glossy offshoot of the Clean, their pop sensibilities were no less volatile on their classic debut.

The formula continued on 1990’s The Law of Things, or at least that’s how it seemed. The album was released the same year as the reformed Clean’s classic full-length debut, Vehicle, and it’s hard not to see an influence from the Kilgour brothers on The Law of Things. Opener “The Other Side of You” is trademark Bats, with carefully wrought riffs and Scott’s high honeyed singing, but there’s also a propulsion here, a pulse just a half-step quicker than anything on Daddy’s Highway. The title track doubles-down on this shift, churning ahead on angular guitars and tight drums, while Scott’s soft voice shifts into a sneering bark. Of course, if the band picks up the pace, they also expand on their intricacies. “Time to Get Ready” is one of the band’s finest purely pop moments, one that clears out the lush density of earlier songs and lets guitar and bass work in tandem instead of on top of one another. The vocal harmonies stretch out into landscapes larger than anything the band had done before. This new subtle expanse continues on the thumping “Nine Days” and the patient, roiling closer “Smoking Her Wings”.

The bonus cuts included with The Law of Things are stronger than the stuff with Compiletely Bats. This disc adds on the North By North EP and a b-side from the “Smoking Her Wings” single. These songs, especially “North By North” and “Straight Through My Heart”, show the time around The Law of Things as a particularly creative period for the band, and even for a notoriously prolific songwriter like Scott. These longer, carefully wrought songs push at the limits of the Bats’s aesthetic and shows an impressive strength in their sound, one that may not hit with the immediate speed of the Clean but doesn’t lose its impact in focusing more on texture than force. The demos and outtakes included with The Law of Things provide interesting context, but like the demos from the first disc, don’t quite hold up to the fully built tunes here.

The line on the Bats has long been that their consistency is limiting. They’ve made eight full records using essentially the same approach, and it’s easy to shrug them off at some point and dismiss the formula as stale. But lining these records up next to each other in Volume 1, we see the built-in variety in the Bats’s approach and in Robert Scott’s songwriting, and we also see subtle shifts and careful tangents over time. Daddy’s Highway and The Law of Things are similar, and made by the same players with the same musical vision, but they are hardly identical. The first succeeds on mood and melody, the second on pitting expansive compositions against taut, energetic ones. The Bats are a crucial part of the Flying Nun story, as well as the story of New Zealand music, and this excellent collection reaffirms that while also sneaking in a few reasons to reconsider the band’s work and appreciate it from a new angle.