It’s all based on a book by French author Pierre Boulle. In said novel, an interplanetary expedition comes across a planet where apes rule and humans are used for slave labor and experiments. Famed writer Rod Serling took the first crack at the screenplay, though his ideas were deemed too expensive and incendiary to film. Blacklisted scribe Michael Wilson was then brought in to bring the concepts down to budgetary (and moviegoer) limits, and soon a sci-fi classic was born.

Audiences were not prepared for Planet of the Apes when it first came out in theaters. The Civil Rights Movement was reeling from advances and assassinations and Serling’s subtext made the roots of said racism all too real. While further script doctoring decreased some of the more provocative material, the notion of Apes as an allegory for its time remained. It was a box office smash, jumpstarting a franchise which saw four initial sequels, two reboots, one follow-up to same, and even a TV series.

Just this past weekend, Dawn of the Planet of the Apes from filmmaker Matt Reeves became the latest box office triumph in this decades long deconstruction of modern political problems merged with outsized future shock designs. From the hated Tim Burton update to Rupert Wyatt’s skilled reimagining, Hollywood has long wanted to give this early ’70s franchise a polish.

Now, thanks to CGI and the abilities of actors via motion capture, we have a new series to celebrate. In that regard, we’ve decided to rank the Apes films from worst to first. At least one placement will surprise/anger/offend most in the fanbase, while the rest can be reconfigured to fit your own personal preferences. One thing remains certain, however: As movie metaphors go, the Planet of the Apes films are solid social commentary… most of the time. Let’s start with what we consider to be “the worst” of the eight efforts:

#8: Battle for the Planet of the Apes 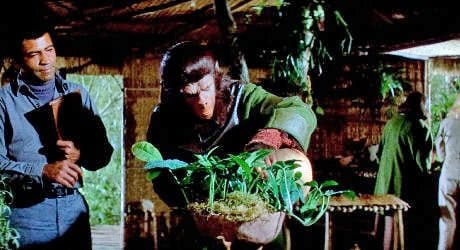 As the “final” link between the first film in the original series and the state of the world circa Conquest, this otherwise journeyman placeholder has some decent ideas and far too much lame early ’70s action. Director J. Lee Thompson, who helmed the last two efforts, was very British and very stagy in his confronts. Instead of the kind of carefully controlled and choreographed chaos of today’s thrillers, he used long sequences of exposition to set up equally languid moments of murderous warfare. Unlike the current pre-battle blockbuster dominating the box office, there’s no real brutality here, just a once vital franchise limping to a close.

#7: Conquest of the Planet of the Apes

A mysterious disease has wiped out all the cats and dogs on the planet. With people needing pets, adopting apes becomes the next best thing… or is it? They soon become our “slaves” (talk about your obvious metaphors — sheesh) and, as a result, gain a leader in the form of an intelligent simian named Caesar (played by Roddy McDowall) who just so happens to be the son of original apes Cornelius and Zira from the first three films. Set within a dystopian police state, there is a lot of ambition here. Sadly, due to shrinking budgets, director J. Lee Thompson can’t truly develop most of them.

Yes, yes. This is a controversial placement for the otherwise thin Tim Burton reboot, but hear us out. Over the course of the previous series, one of the most troubling elements was the make-up. The first film earned its Oscar. By the time of the TV series (did you know there was a Planet of the Apes TV series???), the masks were looking ratty and dated. So we place this above Battle and Conquest for one reason and one reason only…Rick Baker. Along with some initial input from Stan Winston, the ape concepts are so amazingly great here that it’s a shame the rest of the film them down.

#5: Beneath the Planet of the Apes 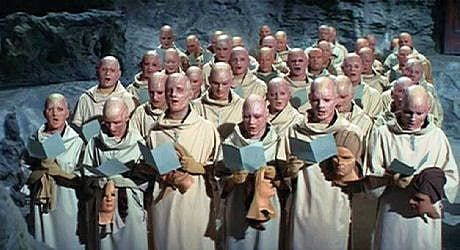 Two years after the first Apes film devastated audiences with its twist-ending, another ship crash lands on the planet and we get another attempt at serious sci-fi mixed with social commentary. In this case, a new human astronaut played by James Franciscus tries to figure out what happened to Taylor and Nova after they rode off into the Forbidden Zone. He comes across a bizarre cult which worships a nuclear bomb. Naturally, a confrontation between these telepathic mutants and apes ensues, with our previous hero Charleton Heston setting off the admired A-bomb. Thus, the entire franchise was flash-fried, that is, until the next installment.

#4: Escape from the Planet of the Apes

In the kind of movie move that only makes sense in cinema, three of the main monkeys from the first Apes films — Cornelius and Zira, and their pal Dr. Milo — manage to “escape” the destruction of Beneath and soon find themselves floating in the waters off Los Angeles. Once placed in a zoo, their abilities are eventually uncovered, resulting in the kind of comical handwringing that would come to dominate the post-modern sci-fi movement. Naturally, once the humans learn their fate, they decide that our time traveling visitors must be destroyed. It all leads to one of the most memorable endings in the entire series.

#3: Rise of the Planet of the Apes

This impressive reboot did so many things right that we can forgive its one major flaw (the forced relationship between leads James Franco and Freida Pinto). A scientist creates an Alzheimer’s drug which makes its test subjects — in this case, apes — more like humans. Thus we have the birth of future hero Caesar, his education at the hands of his human friend, and the final act when our now intelligent simian rebels against his brutal ‘masters.’ While lacking the subtle shading that would come with the sequel, this still remains a stellar expression of man’s desire to play God and the nature-altering consequences of doing so.

#2: Dawn of the Planet of the Apes

Just like The Empire Strikes Back, this brilliant amalgamation of Rise‘s raison d’etra and the future of the franchise delivers both devastating future shock as well as smart human/animal byplay. After a disease decimates most of the planet, the last remnants of civilization struggle to survive. In the meantime, the apes have begun their own ‘society’ and are seeking ways to protect themselves from the hand of man. Naturally, when these worlds collide, there will be no winner. While some may feel manipulated by the movie’s “us vs. them” ideals, the overall effect is a masterful combination of science fiction and serious filmmaking.

Any list which doesn’t place this film at the very top is dealing with a fool’s perception of purpose. Without the original, without Charlton Heston’s amazing performance, the quotable dialogue, and that ending (a final shot which still sends shivers up the spine some 46 years later), we wouldn’t be praising Andy Serkis or Matt Reeves. No, what the first Apes effort did so fabulously is create a totally foreign world, make us believe in its mythology, and then pull the rug out from under us just as we thought we had things figured out. It’s a certified classis, a status the two new reboots have yet to truly earn.