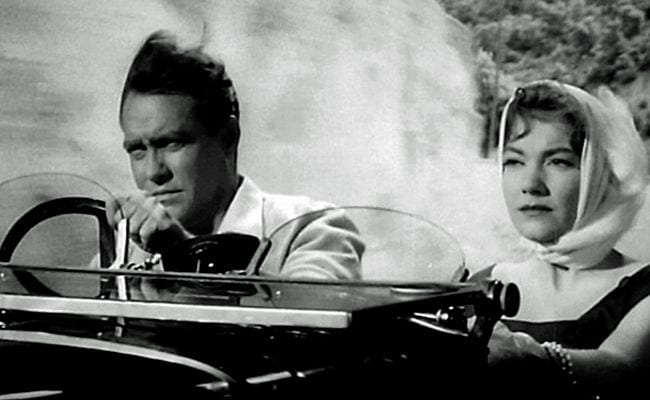 Kimberley Prescott (Anne Baxter), who lost both her brother and her wealthy father, is wasting away her life in a fabulous villa near Barcelona, going to parties and sighing, not unlike Jean Seberg in the same year’s Bonjour Tristesse. But wait—a mysterious man (Richard Todd) and a harsh woman (Faith Brook) are studying slides of her villa’s exits and entrances, so something’s afoot. Suddenly the man shows up at the villa and claims to be Kimberley’s dead brother, Ward Prescott, and that a stranger really died in the car that went over a cliff. And thus, the plot for Chase a Crooked Shadow is set in motion.

Kimberley calls the local police inspector (Herbert Lom), who patronizes her when she explains that this man isn’t her brother. The stranger calmly produces all documentation and answers all questions that the brother should know, so things look bad. David Osborn and Charles Sinclair’s screenplay trades not only upon sexism and the heroine’s helplessness before the authorities, but also on our own uncertainty about her sanity and motives. The man might or might not be her brother, partly because his unlikely tale has been used in many other stories and partly because being her brother doesn’t preclude that he’s plotting against her.

British director Michael Anderson is known for bigger projects, especially his Oscar-winning Around the World in 80 Days and, later, The Shoes of the Fisherman and Logan’s Run. This is a smaller, tighter, shorter item, and all the more satisfying for it. Erwin Hillier’s elegant black and white photography is rich and seductive, counterpointing our desire to see the gorgeous scenery in color with a near-hysterical, suspenseful noir atmosphere that throws a key light on certain details, like the bulbous brandy snifters. Hillier, whose roots in German expressionism go back to working as a camera assistant on Fritz Lang‘s M, worked regularly with Anderson.

Editor Gordon Pilkington deserves a shout-out for a brilliant highlight of racing around the cliffs of Costa Brava. The unusual, non-intrusive score by Matyas Seiber is performed on Spanish guitar by Julian Bream, perhaps in homage to the zither music of The Third Man. Also in the cast are Alexander Knox as the heroine’s drunken uncle, Alan Tilvern as the menacing hulk of a new butler, and literally a last-minute appearance by producer Douglas Fairbanks Jr., who walks on like a dapper host and asks us not to reveal the ending.

We won’t, but we will say that it resolves all potential issues with the script. Although I didn’t predict the outcome, you might on the basis of recycling; a blog called Tipping My Fedora traces this plot back to a radio episode of The Whistler and forward through various TV movies.

An excellent print is now available on demand from Warner Archive.