It’s officially over. We’re done for another year. No more witches and warlocks, no more ghosts and goblins, o more zombies, werewolves, vampires, axe murders, hockey masked psychos, chainsaw wielding cannibals, and other pop culture novelties. (Which reminds me that there’ll be no Frozen costumes — thank goodness.) Yes, another 31 October has come and gone, and with it, the desire for fright fans to indulge in all things menacing and macabre. For most, it’s a one shot deal, a night out in costume, a chance to have a few relatively safe scares and, maybe, to pull a few pranks.

For others, it’s a lifestyle, a 354-day-a-year struggle that only the last day in the tenth month can cure. All over social media and the blogsphere, those taken with terror post their Best and Worst Of lists. But once the bats have returned to the belfry, what then? How can someone celebrate the season of scares without having to go back to the Voorhees and the Myers, the Romeros and the Carpenters?

Well, it all depends on what you consider “horror” to be. Granted, a guy dressed up in a blank expression William Shatner mask wielding a butcher’s knife is easily identifiable as fear, but what about not being able to pay the mortgage, or having $25 in the bank and several days before payday? What about the exceedingly nice next door neighbor who is actually cooking meth in his (or her) basement, or the kindly old gentleman who may or may not have sexual desires for your underage kids?

These are the real reasons to curl up in a fetal position, to lock your doors at night and wait for ISIS, or the Taliban, or some other media-manufactured bugaboo that won’t really affect your everyday life, but will make you dread every day you know about it. So as a kind of post-Halloween hangover cure, here are ten terrific non-horror horror films to provide that “hair of the demon dog” experience you need right about now. And who knows, maybe next year, one or two will replace The Monster Squad in your regular viewing rotation. 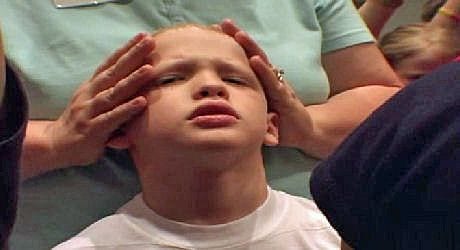 Wanna know why the USA is so screwed up? Want to understand where religious types (on either side of the sacred story) get their ingrained, seemingly brainwashed viewpoints? Watch this startling honest documentary and prepare to be terrified — really terrified. Yes, these are actual adults teaching actual kids about their “prophetic gifts” and their need to “take America back for Christ”. They then bombarded them with the standard talking points, from Creationism to abortion, always peppering their preaching with admonishments against homosexuality and for honest “evangelical values”. The results should send shivers through any open-minded, indoctrination-averse person’s spine… and it does.

9. The Legend of Boggy Creek

Charles B. Pierce was fascinated by the story of the Fouke Monster, Arkansas’ supposedly legitimate answer to Bigfoot, and so the former kid’s show host and ad agency exec decided to make a movie about his new obsession. Using a docudrama approach, he presented facts with reenactments, allowing the audience to judge for themselves whether the people presented were telling the truth, or merely making stuff up for the camera. All throughout Pierce reminded audiences of the potential danger via a terrifying plaintive cry said to belong to the beast itself. To this day, the sound of that creature’s wail can still cause goosebumps.

It’s 1970 and President Nixon wants to crack down on counterculture rejection of the War in Vietnam. So he orders the creation of a social experiment to act as sentence for those accused of undermining the country. An ad hoc tribunal sets groups of people out into the blazing heat of the California desert with the National Guard hot on their trail. If they can survive three days without food or water, they avoid jail. If they don’t… well, you’ll just have to watch and see. This pseudo-documentary from writer/director Peter Watkins not only works as an unnerving “what if”, it reminds us that with freedom comes fear and force.

David Lynch’s warm-up for the far more freaky Mulholland Dr. sees a supposedly happy married couple Bill Pullman and Patricia Arquette leading a somewhat sedate life when, one night, a call on their outside intercom explains that “Dick Laurent is dead”. Then, our hero starts receiving packages, each containing a videotape, each containing footage seeming shot inside the couple’s home. Naturally, the images grow more and more disturbing. Later, he is charged with her murder and suffers a sort-of “fugue” state, becoming another personality (Balthazar Getty) all together. And then this Mobius strip of a movie really starts messing with your mind.

A worker at an old folks home hears she might be getting promoted. One night of booze and pills later and she hits a newly homeless man with her car. He gets stuck in her windshield. She continues to drive home…and then just leaves him there. Believe it or not, this Stuart Gordon (Re-Animator) gem is based on a real life incident. Yes, someone actually hit someone with their vehicle and left the victim in the glass to die. While the individual who inspired this sick little thriller is now spending the next 50 years in jail, our fictional perp doesn’t get off so lucky. 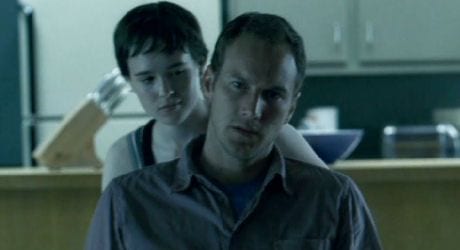 Just call this To Catch a Predator, the Unrated Version and you’ll understand exactly what Ellen Page and Patrick Wilson are up to. She’s a young girl hoping to find out what happened to a school friend. He’s a 32-year-old photographer who may or may not be a murdering pedophilic rapist. As they meet, greet, and start their psychological cat and mouse, doubts are raised. Once he is tied to a chair and she unearths a secret safe filled with incriminating pictures, the pleading — and the punishment — begin. By the end, we’re not sure if the criminal or the vigilante is more guilty.

There are actually two movies made of this sickening story, but steer clear of The Girl Next Door. It gets far too much jolly exploitation mileage out of this otherwise nauseating case of kidnapping and sexual abuse. Fans of John Waters might recognize the name Gertrude Baniszewski, but to most of us, she is an unknown horror we never knew happened. After agreeing to “take care” of Sylvia Likens and her sister, our Good Samaritan turned out to be a sadistic ghoul. She tortured the older girl, burning her and allowing neighborhood boys to assault her. And you won’t believe what happens with a heated sewing needle.

While they are other equally upsetting storylines in Todd Solodnz’s post-modern masterwork worth fretting over, the main narrative is the nastiest. Apparently, a sleepy little suburban town harbors a horrendous secret — one of their own is a raging child molester whose obsessed with his son’s classmates. Constantly pressuring his own kid to invite his friends over, our otherwise “normal” dad enjoys drugging these kids and raping them. When finally caught by the police, he must face his family. When asked by his son if he’d ever assault him, the answer is jaw-dropping. “No”, his parent assures him, “I’d jerk off instead”.

It’s called MCS or “Multiple Chemical Sensitivity”, and Julianne Moore’s everyday housewife seems to have it. We say “seems” because there is a lot of speculation, especially among her family and friends, that it’s all psychosomatic. As her symptoms worsen, our heroine takes drastic steps in order to keep her and her failing body healthy. Eventually, she moves to a New Age commune where many MCS sufferers struggle to find any semblance of hope. Director Todd Haynes does a delicate job of limiting hysteria while amplifying the horror. You’ll never look at a standard spray bottle of household cleaner the same way again.

1. We Need to Talk About Kevin

It’s a fear that most parents share: “Will my child grow up to be good, decent, moral, and law-abiding? Or will he be bad — even really bad?” Well, in the case of unlucky couple John C. Reilly and Tilda Swinton, the answer is the latter. The movie, which takes up after the title teen unleashes his lingering lifelong inherent evil on his schoolmates Columbine style, uses flashbacks to argue that Kevin was always rotten. And always ready to undermine his distant mother’s dream of a fantasy family life. A disquieting and disturbing look at genetic predisposition, “Bad Seed” syndrome, and the age old argument of “nature vs. nurture”.