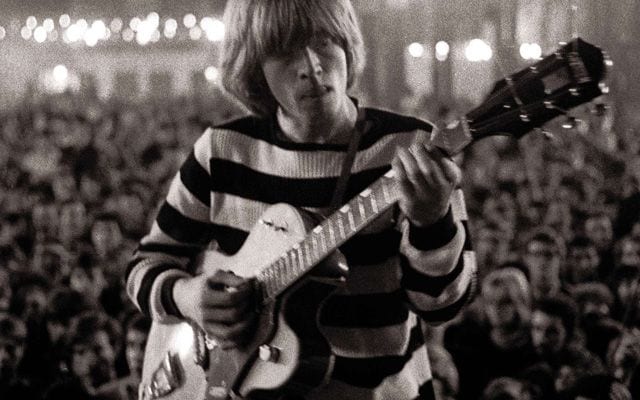 The music, history and legend of the Rolling Stones appears inexhaustible, inspiring a steady industry of biography, historic accounts, CD reissues, concert films, and even the occasional tour, such as the recent 50th anniversary victory lap, where these wily classic-rock veterans can still be admired in person.

“History is written by the victors,” writes Paul Trynka in the preface of his new book, Brian Jones: The Making of the Rolling Stones, “and in recent years we’ve seen the proprietors of the modern Rolling Stones describe their genesis, their discovery of the blues, without ever mentioning their founder.” So this volume arrives as a determined corrective to the band’s own somewhat revisionist origin myths. The book also seeks to rehabilitate Jones’ position as a visionary musician and important cultural figure in the pivotal decade of the ’60s. Trynka: “Brian Jones got many things wrong in his life, but the most important thing he got right, for his music was world-changing.”

Trynka rarely misses the opportunity for corrective reply as he presents an otherwise conventional biography. Jones was born in February 1942 and grew up in Cheltenham, a provincial Regency town in England’s southwest. Jones’ parents were what has been described as typically British of the era: reserved and repressed. Jones came of age through a typical middle-class upbringing, but by the time he was 14 he had begun to exhibit traits which would define him: a derision for authority, narcissism, sexual appetite (he fathered four children before he was 20), and an obsessive love of music, particularly American jazz and blues.

Jones’ possessed a fierce work ethic, listening repeatedly to recordings by Elmore James, Robert Johnson, Muddy Waters and other classic American blues musicians to unlock the secrets of their sound. Notably, as Trynka zeroes in on, Jones had vision. By 1961, a time when even the most enthusiastic adherents in Britain saw no future in the blues other than as a marginal concern, Jones was convinced that the electric blues and R&B could be the signature sound of his generation. He was relentless in his pursuit. Trynka: “For comparison’s sake, at the time when Brian was immersed in the world of Robert Johnson, hitching round the South West to find someone who would let him share a stage, Mick Jagger was enchanting mums in the front rooms of Dartford singing songs by Buddy Holly.”

The focus on Jones’ path to founding the future Rolling Stones is a fresh take on a familiar story, one which allows Jones’ primacy as the leader and progenitor of the nascent British rhythm and blues scene, as defined by the Stones, due acknowledgment. The Rolling Stone’s first album receives a new appraisal as the embodiment of Jones’ original vision, and its influence on an as yet unrealized generation of garage rockers is heralded.

Seconded by the recollections of early Stone and later Pretty Thing Dick Taylor, Trynka figures the open-tuning style which became Keith Richards’ signature was not learned from Ry Cooder in the late ’60s, as Richards has always claimed, but from Jones in the early ’60s. Jones was also the principal developer of the distinct interweaving patterns of the Stones’ two guitars.

It ‘s probably useful to see the career of the Rolling Stones as a series of distinct phases, with the first of those (1963-1967) indelibly marked by the presence of Jones. Reviewing footage from the era, he is a strong presence, with a bowl of blond hair and a face which hints he has been places and done things not discussed in polite society. When manager Andrew Loog Oldham entered the scene and began to emphasize a difference between the friendly Beatles and the menacing Stones, it was Brian, not Keith or Mick, who first embodied a danger, and in doing so he cannot be underestimated as a key potent symbolic figure influencing the sexual revolution to come.

Seeing things from Jones’ point-of-view, author Trynka reviews the personal dynamics of the band, seeing the seeds of future discord in something so trivial as Jones’ initial contract, which allowed him an extra five pounds over the others. The British pop stars of the era never figured they’d be popular for more than a couple of years, but riding the wave of the baby boom on crests of ambition and rivalry led to new horizons of creativity and celebrity. Jones was not a songwriter, but his crucial contributions to the classic compositions from the era are duly noted.

From 1965-1967, Jones was at the centre of Swinging London, a man of his times. His relationship with the beautiful, and also somewhat dangerous, Anita Pallenberg and friendships with the era’s top (intimidating) talents such as Bob Dylan and Jimi Hendrix, made him a cultural figure to be reckoned with, and one who was comfortable and adept with the intense creativity and change that marks the period.

German filmmaker Volker Schlondorff, who managed to get Jones to create a soundtrack for one of his early films, considered Jones “amazing. He was a Shelley-style character, a dandy. He could be spoiled and nasty, but at the same time he was creativity incarnate, and he had great intuition.”

Trynka believes it was a series of police drug raids beginning in 1967 which are responsible for the ultimate undoing of Jones. He has former Stones accountant Stan Blackbourne set the context: “Every time the establishment saw a picture of Brian Jones, they saw a political statement. He was remarkably honest about what he was, and to that extent he was very vulnerable. Because he was blurring gender, with long hair, those clothes, his love of exotic cultures, his rejection of orthodox religion. Wearing those clothes, that was a political as well as a fashion statement.”

Advice received in the aftermath of the drug raids served to isolate Jones from his fellow Stones, and an unfortunate introduction to Quaaludes around the same time created a series of bad reactions to his self-medication — precisely the nodding off and disorientation so roundly derided later by his soon to be former bandmates.Trynka builds a solid case that Jones’ drowning death was a misadventure rather than a sinister occurrence, and he feels strongly that controversies over the circumstances regarding the death have contributed to the muting of Jones’ accomplishments as a musician and cultural figure in the pivotal decade of the ’60s.

Another important source of this muting has been the attitudes of the surviving Rolling Stones: “In the decades since (1967), we’ve all read thousands of words by the Rolling Stones on Brian’s unreliability, his treatment of Anita, those fateful five pounds, the twelve gigs he missed out of over 930. In the spring of 1967, Brian made no public complaints about his bandmates, nor in private, either.” Jones, that is, never turned against his band, but was brought low by a series of events which served to emphasize his latent weaknesses, occurring in a milieu, his band, which was rife with jealousy and internal power struggles and would offer him no support at all.

In fairness, the surviving Stones have not always been petty towards their former mate. Keith Richards spoke generously in a 1989 BBC documentary, “… he was really the first one in the band to bring in other elements of other people’s music — the sitar he was very interested and also he was very adept. Brian could walk into a studio and no matter what instrument was lying around, even though he had not played it before, he’d be able to knock something out of it very very quickly. And so he used to use vibraphones and stuff mainly just because they were lying around the studio. And everyone thought what a wonderful piece of orchestration, but it was (his) sheer excellence and Brian’s ability to get something out of an instrument. Hence he’d pick up some sort of primitive instrument he’s heard, and he’d be able to play it. So he brought more exotic tones to the band.”

At the same time, the 1989 production, The Rolling Stones in Morocco, is revealing of the other side to the relationships of the original Stones. Trynka: “A few people today, Marianne Faithfull in particular, theorize that Brian’s death left his old bandmate Keith free ‘to become Brian’ — to take his persona, adapt and improve it.” In that light, the BBC production is rather disconcerting, as Jagger, Richards, and Ronnie Wood retrace Jones’ footsteps and interactions with the Moroccan musicians Jones famously visited and recorded back in 1967, with little acknowledgment of Jones at all. In one sequence filmed inside their host’s home, Jagger is shown a small shrine dedicated to his former bandmate and he barely reacts, quickly turning the topic of conversation to Byron Gysin.

Trynka did a lot of original work to make this book as good as it is. The core of its insights are based on literally dozens of interviews with persons close to Jones at all stages of his life. There are recollections from former classmates, former girlfriends, people from the Rolling Stones organization, and those who worked with the Rolling Stones but maintained an outsider’s remove from the inside personal dynamics. Most of the interviewees are older now, and so can speak from a wiser and more objective perspective. Many of the insights are quite striking.

Brian Jones: The Making of the Rolling Stones does not replace any of the better books on the subject of the band, but it does step up to take a place beside them, and provides the crucial corrective to review the still amazing first phase of the Stones’ career. It also, by rehabilitating Jones’ reputation, adds to the literature describing the cultural currents of the key decade of our modern era.