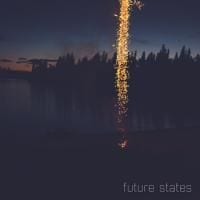 Both the Cowboy Junkies and Arcade Fire are known for recording at least one of their albums in a church. Well, that’s what Montreal-based Future States did on their debut self-titled EP, too. It was recorded during a week of late nights at a you-know-what in Timmins, a city in northern Ontario. The church sound is captured throughout the EP — you can definitely hear the reverb on the drums — and a few personal touches were added in: the church bell was recorded, and organ and piano parts were done using the church house instruments. While this EP is pretty secular, it’s a pretty good and unique summation of a sort of folksy indie rock sound. Basically, the descriptor I came up with while listening to this for the first time was “Simon and Garfunkel on amphetamines”. Not because the music is played super-fast or anything — it just has a very rootsy sound that resembles that duo’s harmonizing and owes a bit to Fleet Foxes and Grizzly Bear — but doesn’t at the same time.

So, while the music on the Future States EP is fairly one-of-a-kind, its charms are subtle and don’t quite bowl you over. It rocks out, but in a folk kind of way. That makes the EP delectable and charming, even though it’s not a barn burner. While I wouldn’t say that the songwriting is weak (it is, in fact, quite good), there’s an intangible quality that keeps one at a slight arms length. I hear hints of other Montreal bands such as Wolf Parade and, of course, Arcade Fire — so that might be it, what I’m trying to put a finger on. It’s not reinventing a sound, but, rather, building on it. Still, one could argue for a bit more walking further farther afield from the Montreal sound of today. That said, though, there isn’t an outright bomb on this EP, even if the music doesn’t quite explode like a missile hitting its target. This is all about nuance. All in all, the Future States EP is a pretty good introduction and makes one curious as to what direction the band will go from here. Pray that they make more music.

The Unreality of MTV’s Reality Shows