Let’s get one thing straight right up front: we clearly recognize, going into this category, that almost every movie made in 2014 could be considered for this list. Thanks to a little something called CGI and its overuse by modern moviemakers, almost every film featured at your local Cineplex contains some animated element. That beautiful rendering of your favorite city or countryside? Digitally tweaked. That stunning car chase or impossible stuntwork? Aided by computer-generated vehicles and characters.

Of course, your favorite superhero and his equally engaging villains are rendered with the help of technology. Even basic stuff, like support wires, make-up mistakes, and posthumous performances are altered, thanks to those post-Jurassic Park technical breakthroughs. So we aren’t going to address this approach. If we did, we’d have to parse through hundreds of movies and make mention of each instance where a laptop or motherboard made a difference.

Instead, we will concentrate on those “old school” examples of live action merging with cartoons. In some cases, the real world is a mere bookend for the pen and ink intrigue presented inbetween. In other cases, both the real and the rotoscoped are combined in completely creative and clever ways. There are some obvious examples that everyone points to (so do we), but we’ve also uncovered some forgotten films that tried to use the concept for equally idealized reasons.

The result is our 10 Best Films Combining Live Action with Animation. Again, we are allowing for those illustrations where both approaches are separate. For the most part, integration is the endgame, wherein with depressed private dicks interact with cartoon rabbits, and tiny animated men attempt sex with their live action sweethearts. 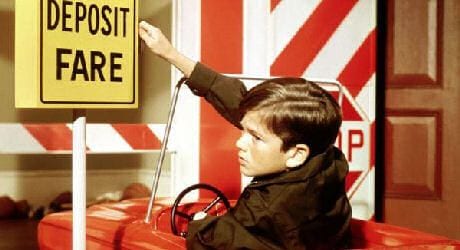 It was helmed by former Warners’ wonder Chuck Jones. It contained a performance by child star of the era Butch Patrick (ex-Munsters) in both live action and cartoon forms. It was based on a beloved children’s book by Norton Juster (who despised the final results) and sat on the shelf for nearly two years before finally being released. It even forced producing studio MGM out of the animation business for over a decade. Still, the story of a spoiled young boy who learns valuable educational lessons after traveling through the title entity into a series of surreal parallel universes has a bizarre magic all its own.

After taking home five Emmys for his amazing work on The Andy Griffith Show, Don Knotts was lured away by Universal for a career as a movie star. His first film was this engaging little oddity, a kid’s movie about a military reject, marine life-loving bookkeeper who magically transforms into a talking tilefish. As a result, he ends up helping the Navy win World War II. Sure, there are plenty of matinee oriented adventures along the way, including run-ins with sharks and some antics with a crusty old crab character, but Knotts’ unique personality and peculiarities shine through, even with his fish persona rendered in pen and ink.

Be warned: this is a product of the ’70s through and through, in both politically incorrect and very NSFW ways. Controversial cartoonist Ralph Bakshi wanted to make a satire on racism and he retrofitted the famed Uncle Remus tales (made equally contentions via Disney’s Song of the South) into a story about three animals rising to the top of the Harlem organized crime scene. Of course, depictions of African Americans as ’30s-era blackfaced primitives, and the dated depictions of gender and sexuality, stunned Me Decade audiences, drawing criticism from all social sides. Originally given a very limited release, the once condemned film is now seen as a masterpiece of confrontational content.

As an allegory for the way love and relationships “change” us, this Italian treat from The Icicle Thief‘s Maurizio Nichetti is hilarious. Our hero is a voice actor who does sound effects dubbing for cartoons. When he meets and falls in love with a pretty handywoman named Martina, he starts to feel funny. Then, without warning, he slowly becomes an animated character himself. The rest of the film is farce, with our little man desperate to woo (and win over, sexually) his live action partner. While the premise may seem outlandish, Nichetti’s warped world view, with its allusions to emasculation and male chauvinism, come through loud and clear.

6. James and the Giant Peach

After helping Tim Burton realize his artistic aims with the brilliant Deck the Halloween Halls crossover, The Nightmare Before Christmas, Henry Selick was hired by Disney to bring Roald Dahl’s beloved book to the big screen. Problems ensued from the beginning, including budget limitations, a last-minute songwriter substitution (Andy Partridge of XTC out, old reliable and dull Randy Newman, in), and some unwarranted studio interference. Selick wanted James to be live action throughout. The money men said “No.” Still, the Dahl estate was more than pleased with the results, leading Selick to strike out on his own and create modern day classics such as Coraline. 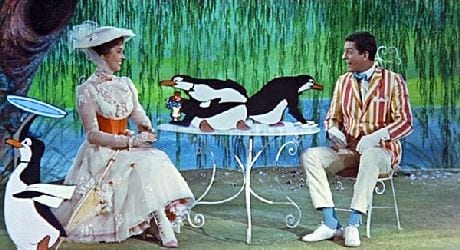 The venerable Walt Disney got his start mixing animation with live action. His initial “Alice” films found favor with early American audiences that were amazed by the combination of styles. So naturally, throughout the course of his career, Disney continued this trend, from Fantasia to Song of the South, Bedknobs and Broomsticks and Pete’s Dragon. But this undeniable masterwork does the best job of using both real people and pen and ink elements. From the famous “Jolly Holiday” sequence to the depiction of a ‘veddy British’ London on an L.A. soundstage, animators added the nuance to P.L. Travers’ fantasies, creating a whole new world in the process.

MASSIVE SPOILER ALERT. If you haven’t seen this post-modern sensation, we suggest you stop reading, pop down to your local Redbox (or crank up your HBO account) and check it out ASAP. Now that that’s over with, we can go on to discuss this film’s inclusion in this list. You see, the big twist here is that our stop-motion Master Builder Emmet (Chris Pratt) is actually a pawn in a pastime rivalry between a disgruntled human dad (Will Ferrell) and his imaginative son Finn (Jadon Sand). They end up reconciling, allowing the Lego world to flourish outside of specific designs and demands.

3. Scott Pilgrim vs. The World

In order to realize the unique visual style of Bryan Lee O’Malley’s popular graphic novels, director Edgar Wright decided to emulate the comics and come up with an artistic approach that would mimic a videogame while carefully balancing the realistic with the fictional. The result is a combination Looney Tune, Nintendo title, and hilarious human interaction. Wright, already known for his stylized work in such beloved films as Shaun of the Dead, Hot Fuzz, and The World’s End, goes overboard here, turning each one of the title hero’s trials into a clever callback to 8-bit ideals. It’s like watching a comic book come to life.

2. The Life Aquatic with Steve Zissou

As part of the premise in Wes Anderson’s unusual road film, our hero (played with deadpan panache by Bill Murray) has a score to settle. Seems his beloved partner in underwater exploration was killed by a “Jaguar shark”, and now Zissou has vowed revenge. In order to illustrate this seafaring terror, Anderson turned to another name on this list, Henry Selick, for some stop motion magic, with the results carefully integrated into the live action material. It turns the otherwise typical tale of an eccentric using equally peculiar means of measuring out oceanic justice into a psychedelic whirlwind of advanced Anderson whimsy.

When it arrived in theaters, no one had seen anything like it. Sure, Disney and its competitor, Warner Brothers, had defined the type by frequently combining its comical characters with live action elements (see this list and other films like The Three Caballeros, Pete’s Dragon, et. al.), but rarely did an entire film rest solely on the interaction between real people and two-dimensional cartoon characters. Thanks to the hard work of the Oscar winning F/X team, including dozens of renowned artists, director Robert Zemeckis made a masterpiece, a near flawless fantasy that’s waiting decades, now, for a long-delayed (and perhaps, unnecessary) sequel. It’s just too good to recreate.