If it’s February, then love must be in the air — along with snow, sleet, rain, wind, and on rare occasions, groundhog guano. Yes, the two big things that happen in the second month of each new year is the annual ritual of believing in wildlife as a bellwether for meteorological predictions, and the celebration of affection by drowning your significant other in candy, flowers, and false pretenses.

Once we move past Valentines Day and into the rest of our lives, the dull drone of our typical romances become just another buzz in a fluorescent life filled with same. So we naturally look to our mediums to make us feel better about our less than successful seductions. The movies in particular enjoy carting out various and sundry couples, each one polished and pristine and guaranteed to make you feel horrible about your own quixotic realities.

Of course, there are other pairings that provide more than just a reminder of rejection. Indeed, these unusual paramours prove that love is blind, deaf, dumb, and in a couple of cases, not only reserved for living, breathing people. Indeed, as we go over the Top 10 Oddest Couples in the Movies, we can see that, sometimes, all you really need is connection and compassion. An eccentricity or two doesn’t hurt either. 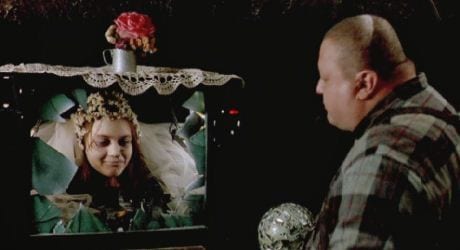 He’s an imbecilic handyman with the low IQ to match. She’s the mayor’s daughter — and she just so happens to be dead. That’s right, in Michele Soavi’s masterpiece of the macabre, our hero (Rupert Everett) and the mentally handicapped assistant listed above must fight off an usual outbreak of zombie-ism in the ramshackle graveyard where they work. That both would end up “romantically” involved with the formerly deceased residents of the cemetery is just one of the many amazing facets of this film. In Gnaghi’s case, his limited vocabulary does little to quell Valentina’s undead desires, especially since most of the loving bon mots are the product of her “lover’s” imagination.

For most of the movie, we hear the title character’s dorky brother proclaim that, via what looks like an aged Commodore 64 computer, he’s been chatting with “hot babes” all day. When one finally takes the bus to visit him, we expect almost anything when she walks out the automatic doors. What we get is a stunning, statuesque goddess, an Amazon ready to make over this man into the spitting image of a naughty white rapper. It’s a shocking transformation, made all the more unbelievable by how much Kip and LaFawnduh really do seem to care for each other.

Zombies again, this time mimicking a bit of the Bard. If you can’t already tell by their names, our undead “Romeo” woos a frightened femme fatale with the standard familial objections running down “man vs. monster” lines. Shakespeare might be shimmying in his grave, but the romance here is real, especially when Julie learns that he betrothed is a “reformed” fiend, slowly remembering his humanity and no longer a threat to devour her brains. While the movie also has a lot to say about prejudice, social engineering, and our ever-present desire to solve problems with violence, it’s the love story that lingers.

Harold (Bud Cort) hates his mother. The rest of his family can go to Hell as well. So when his obsession with death (he is constantly faking suicide, obviously to get attention), leads him to a funeral, and chance meeting with an older lady (Ruth Gordon), love blooms. Indeed, this is one May to December romance that seems to start somewhere in April and end after the crystal ball drops in Times Square. In between, we learn lessons about enjoying life, embracing eccentricity, and in one of the most sobering moments in any eccentric rom-com, how hope helped Maude survive the Holocaust.

Splash was one of the first films for its stars (Tom Hanks, John Candy, and Daryl Hannah) and its director (Ron Howard). It tells the story of a put-upon produce distributor who falls in love with a woman, not knowing that she is actually a mermaid. This sounds like the makings of a disaster, but as it turns out, Disney’s Touchstone division had a hit on their hands, mostly because the relationship between feeb and fish was so warm and funny. Yes, John Candy stole most of the scenes as the sex-obsessed brother, but for the most part, this remains an example of how Hanks became the everyman fantasy of the ’80s. 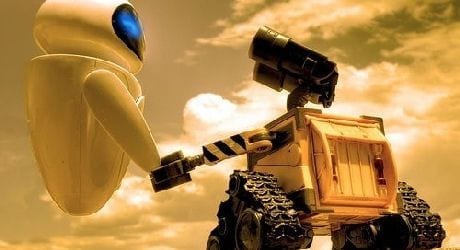 Otherwise known as “robots in love”. When the Earth is left scorched and overrun with garbage (thanks to our fast food-obsessed, throwaway ADD culture), a bunch of automated cleaners are left to process the refuse. Decades later, a scout ship in the form of another amiable automaton shows up, and suddenly, sparks fly. Little Wall-E becomes infatuated with his newfound friend, while all she wants to do is find any signs of biological life and report back to her mothership. Their bond couldn’t be more cute or convincing, and as realized by Pixar, it’s a true work of animated art.

We’ve all heard the joke: two twins who’ve never met before accidentally run into each other on the street. Shocked, one turns to the other and says, “Trade houses and sleep with each other’s wives?” They nod in agreement. That’s the crude version of what happens in David Cronenberg’s bio-horror thriller. Two gynecologists (both played by Jeremy Irons) share a practice, patients, and a love of drugs and debauchery, pushing each other to the very limits of their often divergent personalities. One is unassuming, while the other is more “adventurous”. When Claire (Geneviève Bujold) enters their lives, things go from ordinary to obsessive, with tragic results.

The main subtext of this film is that Eli, as an immortal, requires a human helper through all phases of her never-ending existence. Since the current caretaker is starting to fall down on the job (i.e. providing his mistress blood and protection), it is up to this small girl to find a replacement. In walks bullied boy Oskar, and within a few scenes, you see a match made in some heaven. That’s because, as a picked on child, our little man is looking for someone other than his drunken dad to fight his battles for him. When Eli destroys his various tormentors, you just know Oskar will serve her as long as he can — maybe even forever.

2. Seth Brundle and Veronica (The Fly)

He doesn’t want to let her in. Not only from a scientific standpoint — he’s afraid her journalistic intentions will spoil the surprise of his world-changing invention — but also from a wholly personal one as well. He’s stiff and awkward. She’s warm and empathetic. Then an experiment mishap causes “him” to start changing into an “it”… and all Seth want to do is protect his newfound lady love. There is no big screen romance more doomed than this one, especially since, even within the threat, Veronica wants to aid and comfort her man. Only, he’s not really a “man” anymore… not by a genetic long shot.

1. Theodore and Samantha (Her)

In Spike Jonze’s Oscar-winning screenplay, technology becomes a temptation as mild mannered milquetoast Joaquin Phoenix falls for Scarlett Johannson — or, to be more specific, the voice and personality of his new computer operating system. While it sounds silly and borderline gimmicky (see the ’80s attempt at same, Electric Dreams), the reality is that Jonze overloads his script with ideas so intimate and dialogue so authentic that you never care that Theodore and Sam can’t really “interact”. Instead, we marvel at the depth of their relationship and wonder why real people can’t parlay their own particular proclivities into a love like this.