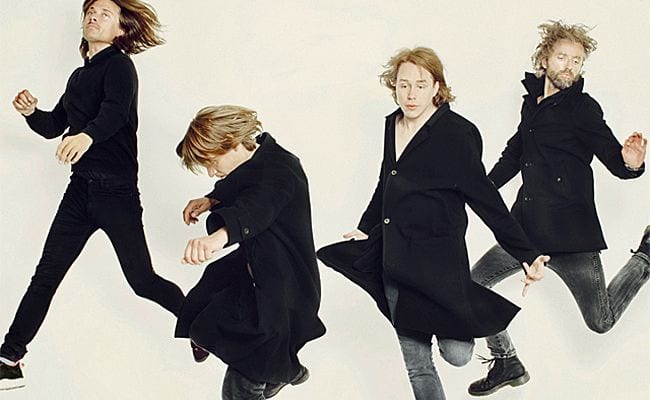 Ever since they broke onto the scene almost 20 years ago with their delightful debut, A Triumph for Man, the Danish quartet Mew have proven to be among the most idiosyncratic and charming bands around. While they are often cited as merely an alternative rock band, their shimmering guitar lines, dreamy production, and seductive yet inviting melodies (delivered with graceful falsetto angst by vocalist Jonas Bjerre) make them more ambitious than that lone classification would denote. Nowhere in their discography is this unique attitude more perfected than on 2005’s And the Glass Handed Kites, a conceptual beast with seamless segues whose centerpiece, “The Zookeeper’s Boy”, still stands as Mew’s best piece. Unfortunately, its follow-up, 2009’s No More Stories are Told Today, was a bit too experimental and unapproachable for many listeners, although it’s still a superb outing.

Considering how much pressure was on them to impress once again, then, it’s not surprising that it took six years for them to make + –, their sixth full-length opus. In fact, they’d begun work on it in 2013, hoping to achieve a “career-defining record” that, according to Bjerre in the LP’s official press release, “…represents the far regions of what Mew can be… it’s like a photograph that’s been soaking in chemicals for a long time, to exaggerate the contrast.” The disc also sees the return of founding bassist Johan Wohlert, who left in 2006 to focus on his new family. Bjerre calls his return “amazing”, noting that Wohlert “[is] great at the root changes [and] the harmonic structures… he’s a great bassist.” Indeed, Wohlert’s return likely has something to do with the more accessible nature of + – as compared to its predecessor. In a way, the album feels streamlined and safer overall, as if it’s the band’s clearest attempt yet to reach commercial success. However, it also feels extremely confident and catchy, as well as wonderfully exuberant and dazzling.

The introductory guitar arpeggios of “Satellites”, coupled with its spacey effects, subtle percussion, and Bjerre’s signature sleek harmonies, prove instantly that the wait between records was worthwhile. It’s a stirring and peppy way to begin, with a rhythmic drive that feels quintessentially Mew. The song’s chorus is among the most memorable in their entire catalog. Like much of + –, “Satellties” isn’t as much of a daring amalgam as earlier Mew gems, but it’s undeniably polished, gripping, and endearingly familiar, as if to announce that the prodigal sons of this style have returned in full form.

One noticeable aspect of + – is the stronger emphasis on the other members’ vocals. Much like how Super Furry Animals’ Love Kraft showcased a wider breadth of singing talent within the outfit, choices like “Witness” and “The Night Believer” incorporate other voices, although Bjerre still leads the charge, of course. In fact, the latter tune is especially transcendent because of this blend, as is “Clinging to a Bad Dream”, which, with its dynamic shifts and eccentric production, feels like a lost title from an earlier work. With Clinging to a Bad Dream, it’s almost as if multiple tunes are playing at once, yet they still fit together beautifully somehow, especially with the mournful outro. Such sonic juxtapositions have always been one of Mew’s strongest suits, so it’s nice to see the foursome retaining it a bit on here.

Later on, “Water Slides” commands your attention with its infectiously appealing chorus and welcoming hand claps. As usual, there’s also a haunting subtext to just about every timbre, as if the speaker is lost in a subconscious realm of regret and woe. It may be glittery and luscious on the surface, but there’s also an inherent heartache beneath that. Afterward, “Interview the Girls” stands out due to its interlocking vocal chants (arguably a nod to progressive rock), while “Row” stands as both the longest and most ambitious track on + –, building from a standard rock arrangement to an overwhelming powerhouse of affective soundscapes and gorgeous distortion. Furthermore, its final movement, of which there are several, is hectic and danceable, but with some dense layers as well.

The album ends with “Cross the River on Your Own”. An initial atmospheric buildup bleeds into a simple guitar pattern as Bjerre whispers his ode. As the ballad progresses, more instruments chime in with precision, decorating the landscape with stunning tones and forceful melodies that can’t help but affect every listener. “Cross the River on Your Own” alternates between frenzied explosions of passion and softer, more contained passages that recall ever so slightly latter Beatles song templates. By the end, the track culminates in a cathartic slice of closure as only Mew could deliver — a fitting way to end.

There’s no doubt that + – satisfies, if not exceeds, expectations. Although it’s less diverse and innovative than prior releases (especially its two immediate predecessors), it makes up for it by being the most poised and commercially tempting album Mew have ever done. They’ve managed to streamline their chemistry just a bit while maintaining all of their most important and beloved characteristics, resulting in a record that will simultaneously please devotees and appeal to a plethora of newcomers who may have found Mew’s previous concoctions a bit too peculiar. In any case, + – further establishes its creator as one of the most distinguished and cherishable modern acts around. In a world of copycats and unoriginality, Mew still preside as a one-of-a-kind triumph.