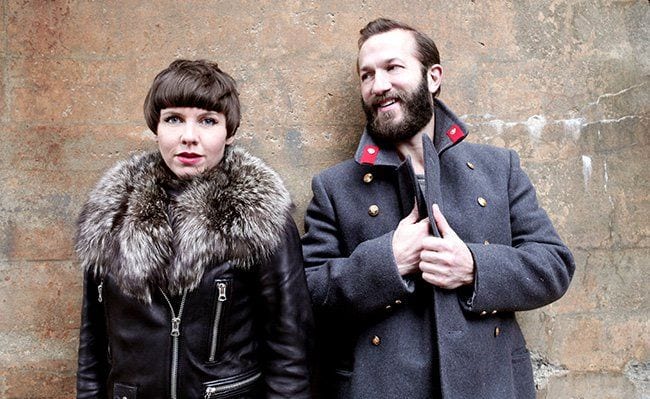 It’s hard to listen to an album by a romantic pairing of musicians without imagining how their relationship bled into the music. After all, a collaboration of any kind means compromise—a middle ground somewhere between where I am and where you are. Yet such compromises do not always fall directly on the path that connects us but rather somewhere in the expansive wood between my home and yours.

Colin Stetson, saxophone shaman, got together with violinist Sarah Neufeld to produce last month’s Never Were the Way She Was. The two have occupied close quarters in the past: with Arcade Fire where Stetson was a collaborator and Neufeld a core member, with Neufeuld’s cinematic sixpiece, Bell Orchestre, and for the film score of Blue Caprice. Stetson and Neufeld position themselves outside the formal constraints of classical and jazz, but these musical traditions inform their work as much as any others. These two Constellation instrumentalists produced an organic work of seismic proportions, free of any sort of digital squeamishness. According the site, the album tells narrative of a girl “who ages slow as mountains; excited, exalted, and ultimately exiled in her search for a world that resembles her experience.”

Indeed, the record is an exercise in the shifting of earthly bodies—of boulders and root beds—so we may press our ears to source. Massive tonal waves sweep you up with sort of tenderness less present in Stetson’s earlier work. Those expecting an album from the darkest corners of Colin’s heavy, pulsating heart will be surprised by a work that delivers a broad scope of tactile energy. Stetson, generally a sax man, takes on the role of contrabass clarinetist on several tracks, adding to the record’s brooding, symphonic sound. What distinguishes this work with such limited personnel is the way both musicians explore the vast spatial capacities of their instruments. As with anything Stetson graces, his churning drones swallow you whole, but this time, he and Neufeld light a candle so you may discern the fine detail of your cavernous enclosure.

The opener, “The Sun Roars into View”, builds from a ghostly wisp into a Lovecraftian beast. Stetson sings into his giant horn as Neufeld’s violin dances deftly around it. The more subdued “Won’t Be a Thing to Become” serves as a meditation on what’s right in front of us as we rest in a single spot. This leads into the light, almost floral “In the Vespers”, a sort of breaking free. These landscapes expand and contract, at once capturing the rushing of air and the fluttering of a dandelion. Unlike the torrential blasts of Stetson’s prior work, this music is meant to give us pause so that we contemplate our journey through nature beyond the sensory. Stetson and Neufeld thus implore us to explore these landscapes rather than plow through them.

Few song titles more adequately describe their effect than “With the Dark Hug of Time”. Its orchestral swells beckon a flurry of woodwind clunking into the deepest frequencies. Its powerful sonic forces push and pull our soft bodies, gouging us as they nestle against us. Sometimes, these feelings of pressure and insecurity build and build without resolution, leaving us in a vulnerable state, unsure where our journey started and where it may end.

In “The Rest of Us”, the percussive clicks and clacks of the sax keys become monumental soundmarks, waves smashing ceaselessly on the shore. Here, Stetson further positions his saxophone as an extension of himself, reaching back in time to a primal state, past the horns of the hunt and of battle, until the sounding of the horn becomes the sounding of life and death. The climax of Never Were the Way She Was, its title track, is drenched with feelings best left unnamed. Its swells and exhalations seem to capture to cycle of the seasons as unstable and unstoppable forces.

While we cannot infer much about the influence of the duo’s romantic relationship on the album, we can imagine how their musical relationship influenced it. For Neufeld, this compromise meant including pure blasts of uncomfortable directness; for Stetson, it meant allowing pensive, symphonic arrangement into the mix. If one complaint could be made, it’s that sometimes the two seem to hold back, as if their compromise fell somewhere right between their two homes instead of in some exotic, third location. Still, the result is as wild and craggy as we could hope. Just try humming these tunes, and you’ll realize how far you are outside your element. To adequately do them justice, your entire lymphatic and digestive systems must hum as well. Almost immediately, one begins to uncover delicate and unbearable truths within. It’s easy to forget that two fleshy humans lay behind this sonic ecosystem.