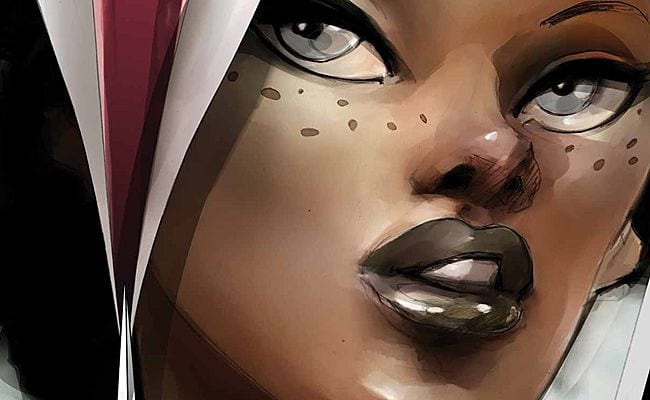 There are plenty of labels that could accurately be applied to The Names. It’s a murder mystery, an action thriller, a conspiracy story, and a sci-fi tale, just to name a few. To me, though, the most interesting aspect of the series is that it’s a love story, but one about the many possible definitions and effects of love, rather than merely being another tale of a new love blossoming.

At the very start of the series, protagonist Katya Walker’s husband Kevin dies in an apparent suicide, but she never believes he took his own life (and the audience knows right away that he didn’t), prompting her to investigate his murder and become tangled up in the secret world she never knew he was a part of. Katya discovers that Kevin didn’t tell her the entire truth about himself.

She has her life threatened multiple times. She gets badly injured on several occasions She also does more than her fair share of damage to other people along the way, but throughout all the madness, violence, and uncovering of lies, her love for Kevin never wavers. She continues to trust in him, or at least to trust in their connection; she stays completely committed to a dead man who lied to her from the start, and that commitment never feel false, desperate, or wrongheaded.

The reader is very much on Katya’s side, and we quickly come to admire her devotion, to the point where we, too, buy into her and Kevin’s love, despite never really getting to see it in action. We see only the results, the complete and unflinching determination with which Katya fights to learn the truth about the man she loved. But those results are more than enough to convince us that Katya and Kevin had something deeply meaningful, something worth all the effort she puts into it after the fact.

Kevin, it turns out, was a relatively high-ranking member of the Names, the secret group of international financial puppet masters from which the comic takes its title. He was killed by the Names as well, or at least by a group working within them. Katya knew nothing at all about the Names while Kevin was alive, so it would be easy for her to feel betrayed or tricked or something similarly negative once he’s gone. Instead, his death and the subsequent revelations about who he really was and worked for all seem to double her resolve, so she goes after the Names pretty intensely, bringing the fight to them and demanding answers.

Ultimately, she doesn’t get as many as she’d like, but that’s not the point from the audience’s perspective. What matters isn’t what she learns but why she learns anything at all; it’s not about where she ends up, it’s about her reasons for taking the journey. Katya never once questions whether or not she should be doing this for Kevin, and never doubts that he deserves her wholehearted love even after his death and the exposure of his many lies. Her unshakeable confidence is the key not just to her character but to The Names’ entire narrative. The whole book is fueled by one woman’s insistence on seeking the truth in the name of love. Katya’s steadfastness is what makes her work as a hero, it’s why she has the strength and endurance to carry this story, and it’s what wins the reader over most quickly and effectively. We believe in Katya and Kevin mostly because she believes in them enough for us all.

Though the Walkers have the biggest and most significant romance in the book, theirs is not the only example of love that The Names offers. Kevin’s son from his first marriage (and thus Katya’s stepson) Philip has his own whole mess of romantic baggage that pops up in several ways and causes various problems over the course of the comic’s nine issues. Philip is a bona fide mathematical genius, a teenager who is working to solve unsolvable problems and making significant progress. As with so many examples of genius, though, Philip’s intelligence comes with a certain social awkwardness, difficulty communicating with or connecting to others.

This manifests itself in different ways depending on the circumstances, but one of the biggest hurdles Philip has to jump is the long-held, secret, shameful attraction he has for Katya, his stepmother. When we first meet him, Philip has a scrapbook full of pictures of Katya, typically ones where she’s wearing very little clothing. Presumably there are images Philip stole or copied from his father, as many of them seem to be vacation photos or the like. It’s arguably a bit creepy that Philip would harbor these feelings for his stepmother, but mostly it just comes across as sad. He can’t help being attracted to her; he can’t help that someone closer to his own age married his father; and he can’t help his total inability to deal with those things in a more mature, open way.

Katya doesn’t handle Philip’s feelings about her especially well once she learns about them. At one point, when they believe they’re both going to die, Philip confesses to Katya that he’s never seen a naked woman in real life. Katya, taking pity on him, later lets him see her fully nude, something she tries out as an act of kindness but which ends up being more of an ill-conceived tease, ramping up his lust for her (and his general, universal teenaged lust) rather than settling him down. This leads to Philip running away in search of a prostitute, which subsequently gets him kidnapped and causes all sorts of trouble for pretty much the entire cast. Again, Philip’s behavior is far from ideal, but easy to understand and empathize with, because he truly cannot help himself. He’s not emotionally equipped to express or explore his feelings clearly, honestly, or responsibly, so he stumbles and screws up and almost ruins everything, all as part of his search for intimacy and/or affection. He’s a bit of a fool about it, but an innocent and sincere one, all of which is very true to his age and the other aspects of his character. We like Philip and, even when we know he’s going about it all wrong, we want him to find what he’s looking for — just not from his stepmother.

In the end, Philip’s inexperience and eagerness are used by his enemies, and create problems for him, Katya, and assorted other players one final time. Philip is hired by the Names to try and figure out the motives of the Dark Loops, a group of sentient intelligence beings who are working against the Names and dismantling the world’s economy. Philip may be the only human with a brain built to understand the Dark Loops, so they see him as perhaps the first real threat to whatever mysterious goals they’re trying to accomplish.

To take him off the board, an agent of the Dark Loops goes undercover as young woman and seduces Philip, distracting him from his work and eventually getting him in an isolated location where he can be eliminated permanently. Though Katya does show up in time to save him, this is one last blunder for Philip in his quest for love, fitting perfectly into his pattern of mishandling every romantic situation he comes across due to his youth and naiveté. It’s sad to see how little progress he makes, but it’s also very interesting to watch, and just like Katya’s devotion to Kevin, Philip’s missteps in his own journey help move the rest of The Names’ story forward.

Katya represents a love that lasts no matter what, and Philip is in some ways her opposite, possessing a more fickle, uncertain, unstable kind of love. But there is another relationship that I think is a more direct contrast to Katya and Kevin’s, namely the one between high-ranking Names member Adam Stoker and police detective Mercedes Guzman. Because the Names are a secret, shadowy organization, Stoker doesn’t tell Guzman about what he does, and she in turn doesn’t ask questions or let him in on the details of her job. They are hands-off, but that’s not to say they have a casual or purely physical bond, either. They care for each other very much, Stoker at one point describing Guzman as “the best thing that’s ever happened to me.” They simply keep one another at arm’s length when it comes to their professional lives because they both have careers that require a certain amount of secrecy and security.

Unfortunately, this is also what finally breaks them up. Through her police work, Guzman gets pulled into Katya’s struggle, since she is one of the detectives assigned to Kevin’s “suicide”. This, of course, leads to Guzman learning about the existence of the Names, which then makes her vulnerable to Stoker’s enemies and opponents, both within the Names and without. So he ends things with her, even though that’s the last thing he wants to do, because he sees it as the only way to keep her safe. He’s probably right, which makes it that much more tragic.

So where Katya risked everything in order to stay true to the man she loved, Stoker gives up his own love to avoid any risk or future pain. These approaches counterbalance one another nicely, and help The Names provide a more nuanced, complex portrait of what love means. Philip then further complicates things with his earnest but misguided sexual strategies, and the overall impression the reader gets is that love can be and is something different to everyone. It can be a source of strength and/or weakness; it can keep us safe and put us in danger simultaneously; it makes us act foolishly while also making us wiser and more aware of ourselves.

This is why The Names counts as a love story on top of everything else it’s doing, and indeed is an exemplary one as far as I’m concerned. It’s not just the story of one relationship like we’ve seen innumerable times before. It’s a very specific yet broadly applicable lesson about the malleability of love, and all the different, even contradictory forms and shapes it takes.

Read parts one and two of our series on The Names.