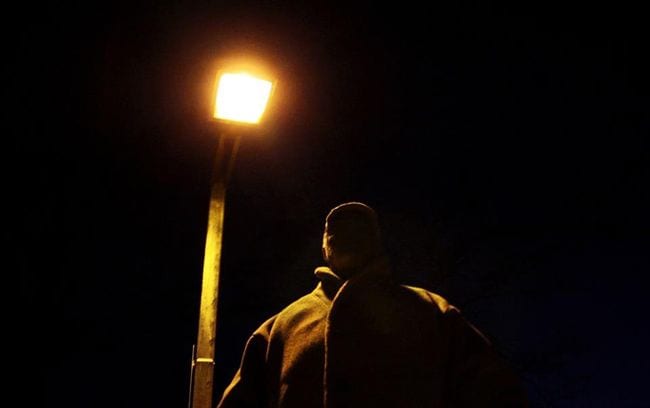 “So what’s going on?” The screen is black as Shariff asks this question of filmmaker Lyric Cabral. “I told you not to come down here with no goddamn cameras and stuff. I told you I didn’t want my face on this shit.” The screen stays black while Cabral wonders who might come after him, even if his face was visible. “You’d be surprised who knows me,” comes the answer.

Here, as the back and forth persists, (T)Error shows an image, a cinderblock wall and a black screen, a sliver of an in-between-space, showing Shariff, briefly and at a distance. He keeps on, “I won’t make no fucking independent film when they motherfucking come after me.” With that, this independent film cuts to Shariff, now wearing a smile and white chef’s jacket, posing for photos with fellow cooks at a basketball game in Pittsburgh. A camera clicks and the frame freezes. Saeed’s face is most definitely on this shit.

In just a minute, (T)Error here lays out its intertwined foci, the perpetual deception of images, the impossible dynamic of documentary subject to maker, the uncertainties of identity and perception. In a word, who knows what?

(T)Error‘s interest in this question is framed by offscreen circumstances, including Cabral’s original connection to Shariff (they were neighbors in Harlem in 2002, when she was a student at Columbia’s J-School), as well as his previous life as Black Panther, his current work as an informant for the FBI. “I don’t like the word ‘informant'”, he says, preferring to think of himself as a “surveillance operative”, assigned to pursue suspected terrorists, post-9/11. (Even as he might surveil, he is surveilled, by the FBI and by the film, which also surveils the FBI). “I need the money,” Shariff says a few times, and even given the terrible irony that the FBI considered the Panthers terrorists back in the day, you can see this logic too.

Shariff agrees to work with Cabral and co-director David Sutcliff in 2011, but almost from the start, their film — which is screening at the 2015 Human Rights Watch Film Festival in New York — takes on a shape that none of them might predict. Shariff takes an assignment to befriend Khalifah Al-Akili, a Caucasian Muslim convert whom the FBI picks up when he makes a few comments on his Facebook page in praise of Osama Bin Laden. In almost every moment of the operation, which goes on for months, the FBI looks silly, pressing Shariff to make clumsy contact, texting nonsensical instructions (“We need to get a read on him,” “Try to buddy him up”) As such texts hang on the screen, the film cuts occasionally to faucets dripping or coffee cups, the details of life that make the not-yet-a-terrorist story look mundane in its fictions. “What is the character that you’re playing with Khalifah, Sutcliffe asks from off-screen. Shariff dismisses the very idea. He doesn’t play a character, he’s “playing who I am, a Muslim brother who was involved with the Black Panther Party, that, that image there.”

As he talks, the film shows a series of remarkable images, an in-and-out-of-focus Shariff waiting in a coffee shop, startlingly close shots on his boot and then his bright red parka as he walks a snowy sidewalk, then a brief archival footage look at Harlem in 1967, brownstones stretching up to the sky, the Panthers’ storefront and kids on the street, singing as they clap hands, “The revolution has come.” It’s a nostalgic view of the BPP and the era, more hopeful and less brutal than today. This even as you also know this isn’t true, that the past was brutal despite anyone’s ideological optimism or political reckoning,

You may recognize the legacy of this brutality — the FBI’s long record of abuses and failures, to start — as it comes into focus in the film’s present, as you see Shariff routines in tight and mobile, frankly gorgeous frames (Cabral is a photographer). He bakes cupcakes (the business he most wants to pursue), argues with his contact on the phone, counts his dwindling money, pins a target’s photo into the map on his wall: “I notice you always get the fucking headshots,” he complains during one of many swish pans. It’s surveillance and art, secrets and revelations.

As you see from the film’s very first exchange, Shariff is hardly shy about expressing his distrust of his partners in this project, and in fact, the filmmakers do deceive him, when they begin another filmmaking relationship with Khalifah, meeting and shooting him in separate scenes (neither subject knows the other is being filmed). Even in the name of revealing the FBI’s moral bankruptcy, this strategy raises questions even as it reveals complex truths about systemic and practical pathologies. The FBI’s counterterrorism program is profoundly caught up in a retro politics and structural incompetence.

That’s not to say that (T)Error doesn’t probe individual foibles as well, including those exhibited by the filmmakers. The problem of who knows what turns inside out again and again, as the movie urges you to worry about what you see, what you trust, and what you can’t know. As compelling as its restless images are, the film never lets you forget what you can’t see, what’s out of frame, what’s deliberately hidden and what’s receding from view even as you look.