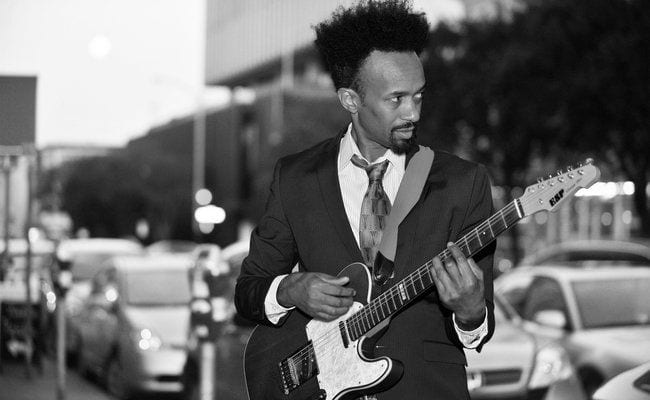 “The Claw.” That’s what Xavier Dphrepaulezz calls his mangled hand, a reminder of his journey to the reborn version of himself he coined, Fantastic Negrito. He’s said that his injury, sustained after a coma-inducing car crash, limited him to three chords, but there’s no disability heard on his latest release, a self titled rebirth of an artist defeated by the industry and creatively reignited by the birth of his son. The Fantastic Negrito EP, a celebration of black roots music, is an extended version of his previous work that includes NPR’s “Tiny Desk” winning performance, that he recently told the Baystatebanner, put his career on steroids.

Anyone who paid any attention to NPR in the last year probably got wind of the Tiny Desk contest. Over 7,000 hopefuls planted themselves behind makeshift desks in obscure locations, performing their hearts out in hopes of standing out and stealing Bob Boilen’s seat for a Tiny Desk session. But it was Fantastic Negrito who won the judges over, howling his brand of blues in an Oakland elevator shaft.

Xavier has so many interesting identifiers; One of 14 children, signing and then losing a contract with Interscope Records that lead to his “creative death”, sustaining life altering injuries in a near fatal car crash, bedding his career, and eventually winning a competitive, career-making music contest. So it would seem reasonable that his latest work be a dissection and reflection of those experiences, but he opted against navel gazing and self-talk, instead he brought the stories of the people around him to life through his sound he calls “realness”.

It’s hard to match the emotive power of the video visual attached to the NPR winner, “Lost in a Crowd”, a soul-pounding anthem for the everyday man whose pain gets lost in the monotony and tasks of life, but the produced version is certainly comparable. While he narrates beautifully, the power of the song is found in the deep dug, wordless hum he breaks up each verse with before the drum beats create a dramatic pause between each word as he sings “Lost in a crowd you feel your thoughts out loud”.

And that hum, reminiscent of Skip James, moves through the first three heavier tracks of the EP like a signature, highlighting the pain and power of his dialogue that reminds us to fight for our happiness. Then, suddenly, the record takes a turn. Changing gears from the moody blues of “Honest Man” and “She Don’t Cry No More” swiftly swerving directly into the Delta blues with the twangy, light hearted “Night Has Turned to Day”. Then, giving the listener emotional whiplash, the EP reverses into a sad soul ballad with “The Time Has Come” until it finally parks the finale with the uber groovy, funk-fueled “A New Beginning”.

The immediacy and disjointed nature of the record seems fitting, in tune with Xavier’s rebellious nature and his disregard for formulaic music after years of diminishing his creativity to fit trend molds. His creative re-awakening feels like a painter’s palette of his favorite influences, highlighting a wide spectrum of sound, even when it seems to make the listener dizzy from transitioning between cigar box guitar get-downs and piano blues.

While Fantastic Negrito is a fun, authentic ride, reminding us of what true resilience sounds like, highlighting the best use of slide guitar and wailing like Jack White on his best day, it still seems better suited for a live offering, as each track could stand alone onstage and feels slightly cramped for an EP.

The same “realness” that got him signed in the ’90s, and the same raw takedown of gritty blues that won over NPR is heard here. Spotlight generally lends to criticism, especially when competition is involved, but with a sound and narrative as sincere and inspiring as Xavier’s it’s hard not to root for Fantastic Negrito.