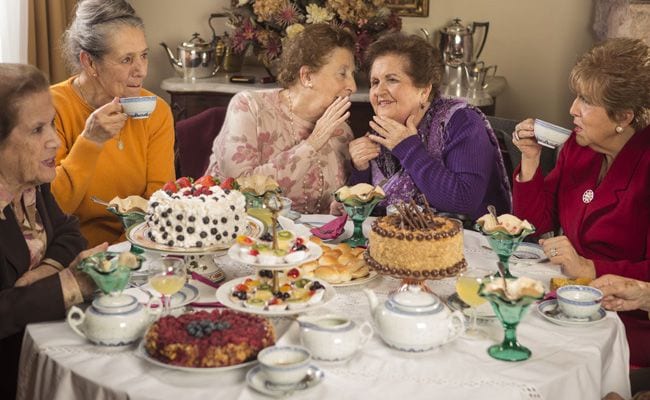 “In a family, the father and mother have different obligations.” Alicia is reading from her Home Economics notebook, dating back some 60 years. She wears a pink plaid suit and pearls, the table before her and her four friends set with silver and china. “While the father must provide money to meet the needs of the family,” she continues, her pink-framed glasses perched on her nose “the mother is responsible for household administration, and ensure the heath and happiness of the family.”

The camera cuts from its close-up on Alicia’s face to María’s, who tips her head back and sighs, her hands clasped as if in prayer. When the camera cuts back to Alicia, her face is briefly blocked as María moves in the frame, her head and her hands in motion. Restless, the friends listen to the list of skills a mother needs in order to fulfill her “obligations”. Not only must she maintain her family’s hygiene as well as her own (“I have these grandchildren who would only bathe once a year when they were little,” María interjects), but she must also have “good character, understanding, zeal, tolerance, prudence, self-control”. Here María’s hand again sweeps across the frame, as the ladies begin to laugh. “Self-control! This is what caught my attention.”

It’s near the start of Tea Time, following these ladies’ annual get-togethers. Filmed over six years (beginning with a meeting 60 years after the former classmates’ last day of their Catholic high school in Chile), Maite Alberdi’s lovely and profound documentary observes their conversations and their habits, their losses and their discoveries. Together, the women share a special kind of language born of trust and habit. They know and don’t judge one another, they share experiences as close frames of faces and foods convey their continuing, shifting strands of intimacy.

Chocolate cake with strawberries and whipped cream, raspberry tarts, finger sandwiches and cupcakes with green icing: each dish is prepared with care, whether by the hostess for that year’s assembly or the maids who serve them. The meetings begin with a prayer, then a kind of news recap. A friend has died, they say, then briefly contemplate mortality (she died of “the same thing I have,” says one lady, though the dead woman’s diagnosis came late). Her death was ‘fast”, they nod, before they recount that Alicia’s prayer preceded her demise: “Every time she prays,” the women note, “The person dies the same night!” Everyone laughs.

Individually, and mostly off-screen, the women have all lived long, complicated lives, four with husbands and one, Gema, unmarried. She’s “the one who really has an attitude”, narrates María. Gema keeps up to date, María observes, as you see her tap-tapping on her laptop keyboard even as María adds that she’s also the “most traditional”, and tends to “censure” the rest of them. Gema, María asserts, is the opposite of Angelica, whom you see serving her husband, seated at the end of a perfectly polished table. He’s one of two military husbands, vaguely described as demanding. “She’s good, too good,” narrates María. “She wants to make everyone happy even if it’s not worth it.”

So, okay, they do judge, just a little. They also ask questions, of each other and themselves, quietly, and not always seeking answers concerning the choices they’ve made. “A job away from home at first may look quite beneficial,” the home economics notebook cautions, before it remarks the dangers of leaving the “health and moral of her children” to the care of servants. As María begins to count off on her fingers the many ways that women work — then and now, at home and away — a server enters the frame behind Alicia, her face out of frame but her hands and torso making visible the question that hovers: what to make of her unseen experience, working in someone else’s home even as she also looks after her own family?

As the women at the table remember their own family dynamics, their husbands’ preferences. When María remembers her honeymoon, and begins singing an old ballad she remembers from that time: “I can forget about you, / The world seems different…” From off-screen, one of the other ladies interrupts, “Enough!” They laugh again. Memories are fine, but nostalgia can be wearing.

All the women acknowledge that “times” have changed, even if a couple of them long for the seeming simplicity of the past. It was “better”, observes one, when women did stay home with their children. Today, well, “Any girl with a boyfriend has sex,” observes Angelica, her purple scarf and pink blouse neatly aligned. In these times, no one marries a virgin, Alicia says. “But neither in those times,” adds Angelica, “It was full of whorehouses.”

Changes in expectations and obligations mean that illusions and pretense are lost. Maria brings up what she’s read about Blue Is the Warmest Color, “a movie about lesbians”. “The review says precisely that it’s a pleasing movie to watch,” she says, as some ladies shake their heads and others lean forward. “But I add that I don’t like the subject,” even if it is less objectionable than “watching all those films with blacks at police stations.”

The tight frame and her listener’s hairdo make it almost impossible to see Maria’s face now. Together they consider the question of judgment, that is, God’s judgment of “these people”. Maybe there has been “too much evolution in our time”, they agree, as the camera shows single shots of lipstick applications, one by one the ladies looking into their pink and white compacts, dabbing at their lips, refining the ideal they’ve learned and achieved over time. Evolution is relative.