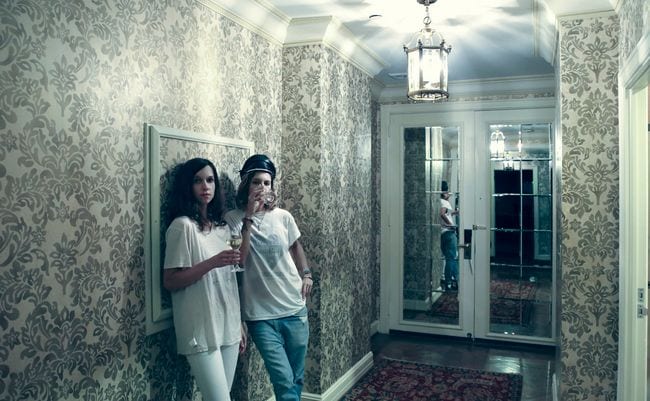 The front cover of Brooklyn duo Telepathe’s second record Destroyer has “FUCK YOU” scrawled across its artwork. In capital letters. Someone – possibly their agent – has tried to partially cross out the “FUCK” but they’ve failed miserably. It still clearly says “FUCK YOU”. Perhaps Busy Gangnes and Melissa Livaudais have good reason to be so, er, frank. The first single from this follow-up to 2009’s frisky debut Dance Mother (originally titled Dance Mother Fucker, no less) was released four years ago. Other singles escaped over the years but despite patronage from tastemakers like Dave Sitek, Julian Casablancas and Trent Reznor, Destroyer itself remained chained up in pop’s dungeon, “delayed by industry and label politics”. Until now. Heads will surely roll…

It’s a surprise then that Destroyer doesn’t sound like a blistering hurricane of vitriol and venom. It’s actually a sincere, romantic and positive pop record. It doesn’t sound like it just awoke from a four-year induced coma either. No. More like a thirty-year one. Destroyer dances like a revived ’85 with one sparkly heel in NYC’s Danceteria and one in Manchester’s Haçienda and it sings, uncannily, like a youthful Kim Wilde. The punkish posturing and hip-hop hipsterisms of Dance Mother have been dialled down in favour of melody, harmonies and a more consistent, glossier sheen. Oh, but Telepathe are still obsessed with clattering, punchy drum machines. You’d better like drum machines. They’re everywhere. “You can never have enough drum tracks” is basically Telepathe’s motto.

The titular introduction is actually about as rowdy as Destroyer gets. The defiant stomp of a Robocop Ladytron with a hammering, Carpe Diem cry, “I’m marching off to war! Destroyer! Destroyer!” A rising tide of eye shadow and spraypaint backed by muscular, metallic, machine gun percussion. It’s easy to see why it triggered Reznor’s alarms back in 2011. A convincing first hit but the cool summer breeze of “Drown Around Me” clean knocks it out of the park. The sensual sweep of warmly anaesthetised analogue synths sparkling over a slow glowing bassline and soft focus disco rhythms. Stretched out in surrender, all blissful rapture beneath the sun, “I scream for you / Capsize me too.” It charms and caresses like the ever suave “Hey Little Girl” by Icehouse and rollerskates away with an ecstatic, low growlin’ “Owwww”. A beatific beauty and Destroyer‘s true treasure.

If the rest of Destroyer doesn’t quite hold the intoxicating allure of “Drown Around Me” it remains pleasurable nonetheless. “Slow Learner” is proper old school, dry ice Europop right down to its pastel fingerless gloves, big bangles, legwarmers and lace. “Shy I am around you”, it flutters like a coquettish Yoda before spinning cryptic crystal visions about “An island filled with wood and corpses” and “The opera of illusion”. Be warned, Telepathe aren’t shy of sharing fanciful (i.e. batshit crazy) imagery but, hey, that’s part of the appeal.

On the fizzy, pogo pop of “Onyx” — a cocktail shakermaker of Depeche Mode’s “Just Can’t Get Enough” and Propaganda’s “Dr. Mabuse” — they seemingly suggest “Endless images… castrate the night time!” They definitely declare “We worship the grave” though before diving headfirst into a sea of glitchy, Space Invader n’ street riot samples. Elsewhere 2011’s “Throw Away This” still reassuringly throws down like Exposé’s block party anthem “Point of No Return” before recent single (2015!) “Night’s Spell” unveils the pining neon heart of Destroyer. “We are destiny / I’m under / You got me”. The closest we get to a ballad, it stands sighing on the balcony, crushed by Cupid’s curse but begging for more. There are lots and lots of drum machines on that balcony too, obviously.

This being the ’80s there are unsurprisingly a few fashion faux pas. The Italo-ish “Damaged Raid” takes Telepathe’s penchant for classic Europap one slice of fromage too far. The cacophony of drum crashes become Biblically melodramatic and there’s a gigglesome Greek chorus for the harmonies. The lyrics too are delivered with tee-hee theatrical aplomb, “Imagery thrown around…. corpses” ,”Abandoned!… Animal!… Protected!… Slain!….” It could be a Saturday Night Live rip of your archetypal pretentious synth duo.

“Someone Is Home” similarly packs all the prerequisite pounding percussion, shoulder pads and Blue Steel pouting but seems somewhat hollow. It does end with an amusing comedy cackle worthy of the Joker himself though so it’s not completely without merit. It’s hard to bear any grudge though when Telepathe close the party by forming a conga line towards the exit with the charmingly titled “Fuck You Up”. Ever the tricksters it sounds more like a boozy Little Boots on a Hen night than Manowar. It’s so jolly and infectious that when they chant “Burn it down! I wanna! Fuck you up! I Wanna!” it all seems, well, like a perfectly reasonable request.

Destroyer may’ve turned up fashionably late but it doesn’t outstay its welcome. Even though some troublemakin’ tearaway has selfishly scribbled “FUCK YOU” across it, Telepathe’s second born is actually an agreeable, approachable sort which should mix well with others. As for being an actual “Destroyer”, it probably won’t incite revolutionary rumpus across the wider Popworld but it’s still plenty strong enough to break a few hearts.