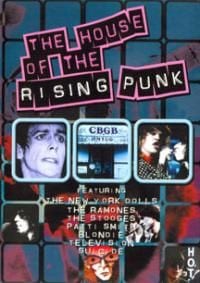 While punk music has been well represented in documentaries about individual bands (The Filth and the Fury, Joe Strummer: The Future is Unwritten and probably even a few that weren’t directed by Julien Temple), attempts to provide a documentary overview of the genre often end up as scatter-shot messes, with the documentarian mistaking punk’s exuberance as an excuse to substitute a well-told tale for a breathless look at a dozen bands that do battle under the punk flag: Look: the Ramones / Sex Pistols / Clash / X / Germs / Green Day! A tip o’ the cap, then to Christoph Dreher, whose House of the Rising Punk, originally released in 1998 for German television and only now finding a home on DVD, expertly avoids falling into the above-mentioned trap, and stands as one of the stronger depictions of the CBGB’s/NYC punk scene.

The liner notes accompanying the disc (sadly, the only DVD extra) pitches the film as an (unauthorized) companion piece to Legs McNeil and Gillian McCain’s wonderful tell-all tome, Please Kill Me: The Uncensored Oral History of Punk, and plenty of overlap exists between the book’s and the film’s interviewees: Patti Smith, Richard Hell, Roberta Bayley, Jayne County, Danny Fields and Dee Dee Ramone. All discuss CBGB’s with love in their heart — even Smith, when she recalls the dead cats that littered the bowels of the club with more than a little nostalgia. Fans are regaled with the chapter-and-verse story of how Richard Hell (nee Meyers) and Tom Verlaine (nee Miller) escaped to NYC, formed Television (no mention of the Neon Boys) and helped build the CBGB’s scene, literally and figuratively, with like-minded musicians drawn to the gritty Bowery.

And with only a brief groundwork-laying detour to pay proper respect to the Stooges, Velvet Underground and the New York Dolls, the action stays in late-’70s NYC. There’s so much wonderful material to share — Dreher unearths clips from filmmaker Amos Poe’s old 16 mm punk films and pages from McNeil’s Punk magazine, to say nothing of plenty of rare performance footage from the time — that no reason exists to deviate from this part of punk history. Let some other film talk about the British or US West Coast scenes.

Dreher also manages to make two key points over the span of the film’s 60-minute running time (insert German-efficiency joke here) that often go unremarked upon in lesser docs: First, Legs McNeil, easily House‘s Most Valuable Interviewee, notes that CBGB’s birthed a reverse White Flight, with the young men and women who formed these band rejecting the suburban dreams of their parents (though the b-roll accompanying McNeil’s remarks — modern-day Bowery bums drunkenly mugging for the camera — plays as little more than a chance for German audiences to snicker at derelict urban New Yorkers). Punk became every bit a musical revelation as a social one. McNeil adds ’70s arena dinosaurs — Emerson, Lake and Palmer, America, etc. — didn’t speak to him, and punk was “music made by human beings talking to other human beings.”

The other key point reveals itself more subtly: These bands sounded nothing alike, yet all did what they wanted to be do on their own terms, and that’s what punk was (and is). Hell, Verlaine, Smith, Debbie Harry, David Byrne and all the rest were kindred spirits, but one wouldn’t confuse their bands with one another. This freedom is missing from today’s rock scenes.

The film concludes with the Sex Pistols storming America, and it heralds the end of punk’s first wave. Dreher provides two moments that compete for the official Death Knell of Punk: Pistols manager Malcolm McLaren showing off some punk fashions, placing fashion at punk’s forefront, creating a costume and killing individuality; and Nancy Spungen trying to rouse a junked-out Sid Vicious, the glorification of the wastrel, followed by a scene from Sid’s “My Way” video.

The lone knock on the doc: Perhaps Dreher ran out of time, money or needed a present-day endpoint, but the film’s final moments, leaping from 1978 to “Smells Like Teen Spirit” is one of the most reductive rock histories ever put to film. That final overreach aside, House of the Rising Punk serves as an excellent addition to the punk-film canon and proves informative for newbies, insightful for longtime punk fans, and instructive to overeager documentarians.