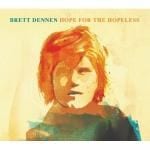 It would be far too easy to write Brett Dennen off as a lightweight. For one thing, there’s the 29-year-old Californian’s personality. Unassuming, likeable, easygoing, his shocks of red hair often done up in a bandanna, Dennen is light years away from the brooding, sullen bad-boy image so often associated with the “serious” rock star.

Then there’s the musical company Dennen keeps. With a sound that centers on lively acoustic guitars, foot-tapping grooves, and sweet, white-boy soul, it’s tempting to cast Dennen as the next in a recent lineage of good-time singer-songwriters with little gravity. The temptation is only exacerbated when the Hope for the Hopeless press material features the statement: “John Mayer, Michael Franti, and Jason Mraz are outspoken advocates for Brett.” While Dennen seems too good-natured to ever dignify such accusations with a response, the title of the fifth track on this, his third album, says it all: “Wrong About Me”. While the song is certainly not about Dennen’s place in the music biz, it’s the only conclusion potential haters could come to after a full-on Dennen experience.

Dennen’s music serves a bridge between the hippy-lite jams that pass for folk rock today and old-school folkies of the ’60s and ’70s who brought the goods as far as songwriting and social consciousness. It might not be an overstatement to say that Dennen could prove an important figure, hopefully turning younger listeners onto the goodness that can accompany thoughtful words and simple melodies sincerely sung.

Dennen kicks off the record with a pair of pace-setting tunes. Opener “San Francisco” marries bright guitars with retro organ countermelodies, opening the sound up and allowing Dennen to sing of fleeing heartbreak for hope: “I’m gonna rent me an old Victorian / Down in the Lower Haight / I’m gonna find me an old accordion / Play for the tourists on the Golden Gate / I’m gonna plant a garden / Paint my bathroom blue / I’m gonna try real hard to get over you…”

Let’s put Dennen’s socially-conscious lyrics in perspective here; he’s no Dylan or Lennon. But he does capture the spirit of a generation attracted to the hopeful promise they witnessed in the Obama candidacy. Dennen is a perceptive songwriter who sees injustice in real-world, black-and-white terms, yet also sees opportunities to right those wrongs.

On “Ain’t No Reason” from Dennen’s last record (2006’s So Much More), he wrote such lines as “Keep on building prisons, gonna fill them all / Keep on building bombs, gonna drop them all” and “Politicians lie and I am not fooled / You don’t need reason or a 3-piece-suit to argue the truth / The air on my skin and the world under my toes / Slavery stitched into the fabric of my clothes”, but concluded “Love will come set me free, I do believe…”

This time around, other songs follow in the vein of “Ain’t No Reason”, especially the tune “Heaven”, Dennen’s attempt at creating an “Imagine” for the iPod generation. When Dennen writes “Throw away your misconceptions / There’s no walls around heaven / There’s no codes you gotta know to get in / No minutemen or border patrol”, his vision is captivating for its sincerity and faith in other humans. Other stellar tracks here include “Wrong About Me” and the midtempo ’70s rock feel of “When She’s Gone”, which features one of the album’s best melodies.

Each track on Hope for the Hopeless is produced and played with precision, yet it feels like Dennen and his colleagues hold each track with open hands, a willingness to let the music guide them. It’s a credit to the spirit and skill of Dennen and those who appear on the record. In addition to Kuti, Dennen is joined by such luminaries as drummer Joey Waronker (Beck, Elliott Smith, R.E.M.), producer John Alagia (who, in addition to Mayer and Mraz, has worked with Ben Folds Five, Liz Phair, and Dave Matthews Band), and up-and-comer Missy Higgins. It’s a professional record that doesn’t come off as a polished experience.

Hope for the Hopeless is the next move down a path that seems to be the right one for Dennen. More attention should only yield more acceptance and acclaim for this young rising star.