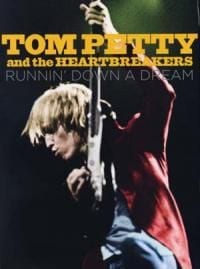 Tom Petty & the Heartbreakers are back-pocket stuff. They’re always there, always on the radio, always playing that song you’ve heard a thousand times before even if you could never pinpoint the exact moment you first heard it, always plying their trade in a world of prettied-up pose. Indeed, there’s a workmanlike quality to a Tom Petty song — it’s as if a job is being done, or a void is being filled, and it’s easy to imagine that the Earth would fold in on itself should that Tom Petty song be removed from its current holding pattern. Tom Petty & the Heartbreakers, it would seem, are essential to our survival.

It’s easy to take Petty for granted; he is, after all, always there and always on, constantly providing this subconscious paradigm of craft, restraint, and endurance. This is the sort of idea that Peter Bogdanovich’s epic documentary, Tom Petty & the Heartbreakers: Runnin’ Down a Dream (originally released as a four-disc Best Buy exclusive, and now available in a two-disc edition), aims to challenge: within the span of four hours, Bogdanovich remakes the ordinary as the extraordinary. Or: Bogdanovich’s film serves as a reminder that Petty and his crack band (keyboardist Benmont Tench, in particular, has become an archetype for the late-20th century supporting player) originated not from the ether of the radio waves but from a place on the map (Gainesville, Florida), and that their rise to the regularly accessed spaces in our minds was truly a rags-to-riches story chock full of 1) naïve exploits (hello, driving out to California and knocking on the doors of record labels!), 2) more naïve exploits (hello, chewing on and subsequently swallowing a wad of hash in order to get past airport security!), and 3) the ways in which those naïve exploits were exploited by others (the drama surrounding Petty’s record and publishing contracts in the late ’70s result in his filing for bankruptcy, and, in a bit of sweet revenge, the release of Damn the Torpedoes, a major commercial and critical success).

Bogdanovich (The Last Picture Show, Paper Moon) scores with great pacing and footage during the film’s first two hours, which cover the compelling story of Petty’s formative years, his first major band (Mudcrutch, a band name so awful it should always be followed by an asterisk and footnoted apology), and his initial success with the Heartbreakers. (Bogdanovich often includes full live performances instead of brief excerpts, which partially contribute to the film’s long runtime.) It may seem odd to us now, but in the late ’70s, Petty & the Heartbreakers were lumped in with the new wave “alternative”: they offered concise, song-focused relief to the noodling prog-addled trends of the decade. “We have a slogan,” guitarist Mike Campbell jokes at one point, “‘Don’t bore us, get to the chorus.'” Each small step of the band’s rise gets adequate examination during the film’s first half, including an excellent section on the making of Damn the Torpedoes with producer Jimmy Iovine.

The final two hours aren’t as smooth, narrative-wise — too much ground is covered, too many albums and side projects (e.g. the Traveling Wilburys) vie for a piece of the narrative’s time. If the first half of the film is a nuanced journey from square one to the big time, then the rest of the movie is a simple manifestation of how the big time is messy and unfocused. Slightly more troubling is how Bogdanovich glazes over Petty’s apathetic dismissal of his band’s members, from losing Mudcrutch personnel in his initial record deal to the departure of original Heartbreakers Stan Lynch and Ron Blair (who later rejoined the band after a two-decade hiatus). Even the drug addiction and sudden death of bassist Howie Epstein, who replaced Blair in the ’80s, is kept at a businesslike distance — Epstein’s passing is barely mentioned before the film moves on.

Of course, there’s a certain emotional toughening that one must endure in order to transcend “ordinary” in the duplicitous world of professional music — it is, in fact, extraordinary to continue to appear so ordinary. And so we can call the Heartbreakers just another band outta Gainesville — “a gang, a bunch of guys to hang around with”, as Tench explains — knowing all too well that it’s never that simple.