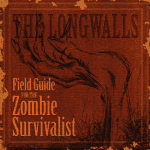 The Longwalls
Field Guide for the Zombie Survivalist
Static Motor

The Longwalls aren’t reinventing the wheel. From a band formed out of the remains of Gatsby, Nag Champa (also the name of my favorite incense), and Drama Queens, Field Guide for the Zombie Survivalist delivers country tinged indie rock with no musical surprises, like Weinland with less bittersweet joy or Blitzen Trapper with less Steve Miller rock. All the songs sound pretty much the same, which makes the concertina in “Call Up The Troops” come as a welcome relief.

Props are deserved for the album’s concept, written from the post Z-Day point of view (or so it would seem). “Zombies” is the only track that drops the “z” word, but, pushed by the quiet urgency in Alan Wuorinen’s vocals and the hint of melancholy provided by the band’s generally solemn twang, it’s easy to see the rest of the tracklisting fitting the mould. Taken at face value, the music isn’t that bad. This Field Guide is cleanly performed, well recorded, and alternately fun and passionate. It’s just not very inspired or stimulating. With a few more tricks up their sleeves, I believe a truly good record is within The Longwalls’ reach. This one simply isn’t it.