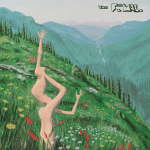 The Formal Female is both remarkable and funny, but it’s hard to say if either of those things were purposefully achieved. When it was recorded in 1972, JW had freshly escaped from a ten-year hell marriage. He had little money for gear and little compassion left for his former life partner. Broke and alone, the record was produced on a Teac 4-track with J-Dub playing everything, including a primitive drum machine. He laid it all down in his third floor apartment in Philadelphia with foam on the windows to try and keep the sirens, buses, and gunshots out, and the supreme bitterness in.

Musically, the record is everything Damon Albarn’s Democrazy would be some 30 years later. Farquhar’s decent guitar chops are complimented with a smattering of weird effects, harmonica, and rustic distortion, while his vocals mark the high and/or low point. As times, he can sound like Tom Waits preaching to a roadie, but no matter how he sounds, his soapbox resentment never fades. His wife must have been bleeding him dry ’cause that’s pretty much what he says in every track. “The Want Machine” certainly pulls no punched in this regard. Over the course of the album, the lyrics and imagery are so over the top bitter, they end up being more ludicrous than tormented, which oddly makes JW that much more compelling. All told, The Formal Female is not A-game material, but it is a worthy footnote in lo-fi and sexual relations history.