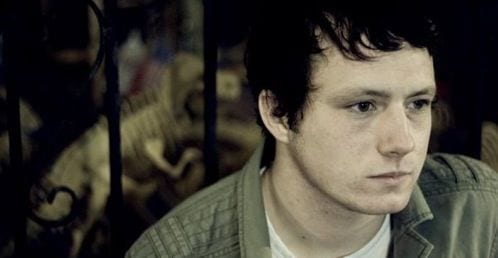 Humility doesn’t come naturally in the music business. It certainly shouldn’t be assumed simply because an artist is playing small venues or even has smaller-sized crowds that an ego won’t rear its ugly head. One would be hard-pressed to find a music critic who hasn’t encountered several up-and-coming musicians with less than modest demeanors. Yet, the fact of the matter is that the prevalence of unchecked egos makes it that much more refreshing when one comes across a budding artist like Michael Hardey, the singer/songwriter for The Innocent, who wears humility on his sleeve — or in his hand on this occasion. The intelligent and well-spoken 23-year old performer had just come offstage after delivering an energy-filled set at Chicago’s Double Door club with his five-man band, a musical emergence of sorts in which the Chicago-area native belted out a superb hour or so of music to a thoroughly engaged audience. The irony was that even after this rousing display of talent, when you might expect Hardey to reach back for a glass of Cognac or perhaps Stella Artois if beer was his thing, all the man wanted to cleanse his palate was a good hard-working beer. Pabst Blue Ribbon was the choice. Aside from perhaps his sincere affection for watered-down beer, I’d argue this was Hardey’s “garage band” mentality making a public appearance. He explained, laughingly after the show to a group of people while enjoying his “$9.99 a brick” beer, “Hey, they asked us what kind of beer we wanted after the show… of course we asked if they had PBR.” To each his own I guess. The young man had just performed the hell out of his songs from The Innocent’s well-crafted debut EP for which he is the sole songwriter. I was not about to pass any judgment on Hardey’s interpretation of the “finer things in life.” On a night where the first true snowfall of the winter made being stuck inside a house of music that much more charming, Hardey and his band mates took the stage at the Bucktown neighborhood’s Double Door club, a musical hotspot nestled near a busy intersection on Chicago’s Northwest Side. Hardey made sure to show his sincere gratitude several times to the faithful fans that made the trek despite the less than desirable conditions outside. A darkly lit room with a country-bar feel, thanks mainly to wood floors circa 1950 and a Jack Daniels-sponsored lounge, provided just the right atmosphere for The Innocent to rage. If there had been a cigarette-induced haze hovering between the crowd and the mid-level stage, one would have had to do a double take as to decipher whether he was in Chicago or a blues club in Memphis. Damn public-smoking bans can ruin the perfect aura. The small, faithful, and noticeably diverse crowd that had gathered was treated to a unique brand of songwriting by Hardey, an impressive singer/songwriter who is yet to be tormented, creatively stifled, or disenchanted by widespread praise and adulation. Gazing around the dark, yet inviting, room, it was apparent there was an array of personalities in the crowd, ranging from Bob Marley-clad neo-hippies to pea coat donned yuppies. The nonchalant stage presence that Hardey so effortlessly conveyed spoke volumes of the young songwriter’s natural ability to connect with such a wide variety of listeners. Hardey may still be “under the radar,” but seemed to be confident onstage, soulfully expressing himself in songs ranging from slowly-strummed acoustic-arrangements to electric- inspired mayhem. Hardey and his four band mates packed a mean punch in just over an hour ‘s time, switching back and forth between tracks off their self-titled EP, like opener “Quite Alright”, and unreleased tunes like “ This Ain’t Love”. It was inspiring to watch a young band with potential, like The Innocent, working seamlessly as a unit without butting heads. The band functioned flawlessly, despite Hardey’s clear front man-status; a refreshing change from singer/songwriters who let their egos get in the way of the band’s collective Feng Shui. Despite being Hardey’s “baby,” The Innocent had tightness, both musically and personally, that was visible to the naked eye. As the band drove into “Tired Radio”, an unreleased track, Hardey bobbed his head in approving syncopation to the organ intro from multi-dimensional keyboardist Adam GF. Moments later, Hardey swung his C.F. Martin acoustic in the direction of lead guitarist Pete Ledger, praising the tall-blonde ax-man as he shredded the high-E string during a ripping solo with high digital-delay. Through it all, bassist Alex Winter and drummer Terry Fadz kept the groove intact with a well-oiled rhythmic engine of constant reverberation. During tunes like “The Weather, The War”, a personal favorite off their EP, it became clear Hardey’s songwriting talent was not to be taken lightly. The catchy tune, which sounds well polished and radio-friendly in the studio, was just as addictive in person. The track “Don’t You” gave Hardey a perfect chance to display his versatility with a harmonica solo a la Dylan’s “I Shall Be Released”. A nice touch to a song that is light, mellow, and appropriately paced. The show concluded in the same order that The Innocent’s EP begins, with the band churning out “Beautiful Lie”, followed by “The West Coast”. In “Beautiful Lie”, a song that metaphorically puts Hardey’s emotions out in plain view, he admits in a moment of truthfulness, “I can feed you a beautiful lie / The promises you stuck on that tongue / Leave them so I don’t have to run.” While things may change for Hardey as his career blossoms, there’s one promise he ought to make to himself — stick with what works. If all else fails, he knows a frosty glass of PBR will do just fine.