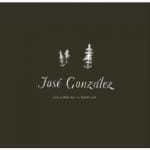 It’s so nice to hear José González again. I don’t know about you, but under the avalanche of new this and leaked that, I haven’t had much opportunity to return to those well-loved songs from Veneer and In Our Nature. This handsome, humble live album, little more than an EP, offers fans a well-due dose of the Swede’s sweet and haunting melody.

In concert, González has generally been straightforward. He sits alone onstage with his guitar, carefully looking at his hands as he plucks his way through stripped-back versions of already Spartan songs. He says little apart from “Thank you,” quickly moving between numbers. His spun-out repetitions of arpeggii, though, quickly establish a strong connection between the singer and the audience, which González sustains throughout his shows. In the gush of post-show chatter you’re likely to hear the words ‘hypnotic’, ‘mesmerising’, ‘dreamy’. Oh, sorry, did I mean ‘dream-like’? Thing is, object of romantic fantasy though he may be for many indie girls, these days González is as likely to talk about his girlfriend Yukimi Nagano, with whom he sometimes performs and whose back-up singing contributed to the (slightly) expanded timber of his sophomore record.

On this live mini-album, González is solo, but the magic is easily recognizable. These versions were captured live at Park Avenue in Orlando, Florida, to what sounds like a small but respectful crowd. You don’t need to have been there to appreciate the simple, heartfelt versions of the songs he plays. If you’ve ever been to a José González concert, this album will be delightful not just for the music, but as a souvenir. It will certainly remind you of the pleasures of your own experience. The question is, though, how similar can these versions be to their originals before they become superfluous?

González’s recorded music often has a temporary, sketch-like quality. It’s only on In Our Nature that duplicated vocal lines, countermelodies, and subdued percussion begin to make an appearance. When you listen to live versions of songs like “Deadweight on Velveteen” or “Crosses”, they sound like gorgeous constructions of fragile parts (just like they do on record). Even stripped-back versions of slightly fuller material — “The Nest”, “How Low” — retain the essence of the original. These aren’t so much re-interpretations as reverent re-tellings, with hardly a note out of place.

In this context, the familiar favourites remain familiar favourites. “Heartbeats”, of course, remains González’s calling-card — and yes, it’s still haunting and gorgeous. He does the song justice, tuning his guitar a tone higher and almost falling to a whisper. “Time to Send Someone Away” reveals its fractured parts, a simple atonal syncopation under the singer’s honest voice. (He often sounds like he’s about to swallow his words.) Live staple “Hand on My Heart” is oddly absent, though. That song, or “Teardrop”, would have made welcome additions to a tracklist that’s a little light.

González’s intensely personal communication with his audience creates a special atmosphere; it’s unusual to find too many José González concerts where That Guy (loud chatter, crinkling beer cans, perhaps a phone call) causes significant interruption. González’s audiences tend to be as respectful of his music as he is. It’s in this context that that live-music magic happens. You can hear it in the breathless pause between songs’ end and the explosion of applause. Listen closely to Live at Park Avenue, and you might hear it too.