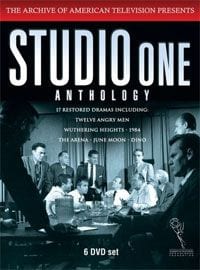 With new techno-gadgets arriving in stores by the month, can we relate to the joy Americans felt when the “magic window” first arrived to their homes? If the distorted images of early television distance us, we can see the excitement all over the face of Lois Hunt, co-star in The Medium, aired December 12, 1948 on CBS. The third entry of the Studio One series (1948-1958), this show opens Koch Vision’s new Studio One Anthology set, and it’s fitting to see Hunt’s face beaming through the cathode rays.

Hunt sings the opening tune of what is, quite curiously and not representative of this set, an opera. Hunt knew she’d have a thousand-plus pairs of eyes watching her every note and dance move in real time – and not months later, as with a taped film performance. Her glee makes for an especially touching moment, one that channels the post-war enthusiasm of television better than volumes of study ever could.

A continuation of a radio program, Studio One was live, and its makers and performers raced in preparation right up to the show’s opening. At the flourish of orchestration, hearts began racing in front of and behind the camera, all eager to successfully open a “window” to America. Nowadays, comedians rush to perform ragtag skits on SNL – in the medium’s golden age, rising stars nailed dramatic art in an hour’s time.

On Studio One, like other live programs of the time, producers presented refined drama, some of it highbrow while most plays were light entertainment. Some of the performances feel like experiments at dramatizing for a new medium. A case in point is June Moon, an adaptation of the 1929 stage play by Ring Lardner and George S. Kaufman that aired on – suitably enough – 22 June 1949. This well-made entertainment sports the rapid chatter in which both writers specialized, though the dialog is drowned out by the awkward staging and what must have been a race to wrap the performance on time. Yet by the story’s first scene, between a young Eva Marie Saint and Jack Lemmon – both fresh-faced and looking fresh out of a jazz club – we realize the importance of this entry: early television drama was a training ground for actors, many of them off the New York stage, heading to Hollywood.

The appearance of both Saint and Lemmon beg for a bigger screen, and we scratch our heads when Lemmon’s character, a jingle writer trying to make good, abandons the love of the angelically beautiful Saint for a sharp-tongued gold digger.

A similar misfire – though a fond attempt – is Wuthering Heights, starring a coiffed and caped Charlton Heston. In the opening scene, Heston (as the doom-laden Heathcliff) chews the scenery right off the walls when screaming out of a window to the ghost of Cathy. Heston remains the black sheep for much of the episode, allowing him to strut like a spiteful rooster: indeed, training grounds for a career to come.

Many adapted stories were too broad for the hour-long format, although an exception appears in William Temple’s version of Aldous Huxley’s 1984, directed by the program’s standby, Paul Nickell. Nickell finds suspense and a causal narrative from the dystopic novel. He maximizes use of a multi-stage set that provided numerous scenes and called for a feat of logistics during live filming. The result is a series of moody, expressionistic visuals, reflecting both Big Brother with video screens and looming, police-state architectural design by Kim Swados and Henry Mat.

Regretfully, a disclaimer does all but flash the face of Stalin to channel a fear of communism, in case Eisenhower America happened to read the conformist message as a mirror to its own face. Yet the baiting is easy to forget, as a focused piece of storytelling takes over. Similarly unified are an August 1955 adaptation of Julius Caesar – a play filmed many times by the program – in which director Dan Petrie’s camera movement opens up the staging, and the morality play Pontius Pilate , even if the latter feels like an attempt to exploit the religious at holiday time.

But the trademark entries in this set – and the most distinct – are those written originally for the program by Reginald Rose, who rests in the dramatic canon as the author of Twelve Angry Men. Before the script was filmed for the big screen by a young Sidney Lumet, the teleplay thrilled viewers right in their homes. Today, it’s hard to forget the cool moral sense of Henry Fonda’s Juror 8 in the Lumet version, and the grandeur of the ensemble around the actor.

Alas, the televised version’s Robert Cummings, in the Fonda role, appears uncomfortable as he trips over line after line. Yet the drama still explodes through the crude transmission. While purportedly a lesson in compassion and understanding, 1950s viewers must have been surprised by the liberal message: Rose urges Americans to remember the “undesirables” casted aside, after 11 of the jurors at first call for the chair like a posse high off today’s Fox News.

Rose shows a similar tone in An Almanac of Liberty. Awkwardly titled, the drama was produced to promote a new book of the same name by long-time Supreme Court Justice William O. Douglas. This magical realist tale – in which time stands still, literally – summons small-town folk to a meeting to ponder their attack upon an innocent drifter.

Rose used a similar device for his more effective original story, The Remarkable Incident at Carson’s Corner. Townspeople assemble for a mock trial at the requests of their children, when – with a plot twist that fellow Studio One dramatist Rod Serling would have loved – the children accuse the school’s janitor of murdering a child.

Paul Nickell shifts the lighting, and the accused’s makeup in a sprint during the commercial break, to reflect small town innocence veering towards a Dantesque fatalism – not dissimilar to Frank Capra’s transition to Pottersville in It’s a Wonderful Life. Rose bravely presents mob logic at a time when McCarthy was rooting through Hollywood for “reds” like a zealot. But even more curious is how the residents suggest the accused, an old single man with no identity outside his duties, to be “odd” and thus sexually deviant. (Written today, the story would have the characters accusing him of raping and murdering the child.)

The accusations dance around this expectation, and the unconscious impulse coupled with the suspense make for a doom-laden tone. Yet, like both Twelve Angry Men and Almanac, Rose brings about justice as the narrative reveals that everyone on this Orient Express is guilty. Rose cannot let his theme rest easy, though: like Serling’s closing commentaries on the Twilight Zone, the moral comes like a sledgehammer when the dead boy’s father intones, “We’ve got to do better!”

Rose again opts for the eerie in The Death and Life of Harry Benson. His initial plot twist suggests that something tricky is at work: a soldier returning home looks completely different. This antiwar piece appears headed to the Twilight Zone, until the ending explains away the preternatural hints like Ann Radcliffe meeting a deadline. (Oddly enough, Rod Serling’s antiwar piece, The Strike, a parable of sacrifice – and one of a couple by the author on this set – plays the drama straight from start to finish.)

Rose’s voice notwithstanding, Studio One had much variety, shown by two genres pieces in this set. The noirish mystery The Storm (directed by Yul Brynner!) reflects the popularity of crime stories at the time. The Storm stars the lovely Marsha Hunt (soon to be a blacklist victim) as a woman discovering she’s shacked up with the wrong guy. (A touching side note: still at work, Hunt stars in Eddie Muller’s intelligent short film, The Grand Inquisitor.) Having aired 17 October 1949, this episode re-staged Studio One’s debut. Dark Possession, a mystery centered on madness with Geraldine Fitzgerald and written by Gore Vidal, roots through pop-psychology for a rather sexist depiction of hysteria. It appears that women needed a psychiatrist/investigator at bad times, while the Stanley Kowalskis could just scream out for their wife-mommies.

This collection’s oddity – and most rewarding entry – stars Art Carney (already performing with Jackie Gleason at the time) in Confessions of a Nervous Man. Subtitled a “Comedy Documentary”, this episode was scripted by George Axelrod, author of the play The Seven Year Itch, about his stomach-churning experience waiting for the play’s opening-night reviews. Set when the author was about to learn the fate of his career, the story eavesdrops on Carney’s George dropping quips and pleas in a barroom, when flashbacks don’t take us into his frantic mind. A surreal set piece of New York stage critics, typing out pans like demons served new flesh, is a delight. Carney ignites the sharp script and finds pathos and humor in a light comedy. It’s a treat of a performance, impressively focused – considering the live format – and the finest acting in this set.

A “Reference Guide” booklet lays out all the credits and offers notable but scattershot information on each episode. A description of a figure’s career will shift right over to another topic, making the entries more like lists than articles. The anthology’s video extras are even more trying: footage from the “Studio One Seminar” at the Paley Center has the liveliness of a C-SPAN marathon at the sixth hour. Appearing are important figures like Nickell and Betty Furness – the sponsor Westinghouse’s spokesperson, who explains way too much about 1950s appliances during the show’s commercial breaks. Yet, the info would be better served as transcripts added to the booklet. As irritating as the Westinghouse spots may become, they are associated with an era of pure drama on television – fresher than it ever will be again.