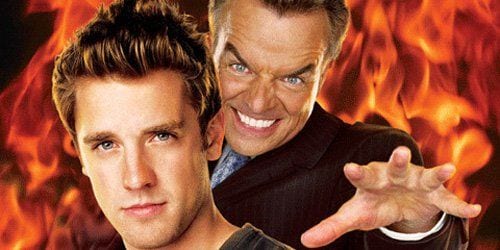 The question that kept occurring to me, and distracting me, while watching the first season of Reaper, the CW’s minor sleeper hit from the 2007/2008 season, is this: is the casting of Ray Wise as the Devil so obvious that it’s brilliant, or so obvious that it’s banal? With his slick suits, his exquisitely coiffed salt and pepper hair, his suave demeanor, his leering grin and a…well, devilish glint in his eyes, Wise wears the role of Satan very well – maybe too well.

In fact, he is such a natural as the Prince of Darkness that it starts to raise some troubling questions. Like, is Wise, in fact, actually the Devil? And if so, what is he doing on network television?

My regular Viewing Companion and I have had this discussion before, mostly in reference to Wise’s most famous role, as Leland Palmer on Twin Peaks, but Reaper has sealed the deal, and we are now in complete agreement: Ray Wise is actually the Devil, and the proof is that Reaper got picked up for a second season, despite its semi-lowly ratings on a regularly cancellation happy network, and the fact that the show itself, though not unenjoyable, is not as consistently good as one would like it to be.

The premise and pedigree do show promise out of the gate. In the pilot (directed by Kevin Smith, who presides over the rest of the series as a guiding spirit and “consultant”, whatever that means), Sam Oliver (Bret Harrison), a going nowhere fast slacker who is wasting life away working at a giant box chain hardware store, is drafted into Satan’s service on his 21st birthday. Turns out his parents made a deal with the Devil long ago to sell their first born’s soul, and now the Devil has come to collect. Instead of dragging Sam off to Hell, the Devil enlists him as a sort of supernatural bounty hunter in charge of rounding up escaped evil souls in need of shepherding back into hell.

The majority of the episodes are mostly (and frustratingly), well, episodic, monster of the week type fare, and tend to unfold in a repetitive manner. Aided by his similarly motivationally-challenged friends “Sock” (Tyler Labine, blustery and obnoxious and the main reason to watch the show) and Ben (Rick Gonzalez), Sam must figure out who the newly escaped soul is, how to track it down, and then figure out how to corral it with a supernatural soulcatcher, which presents itself as a different semi-comical object each episode (the first, most obviously, was a dustbuster — the best? A Magic Bullet food processor).

The Devil pops in and out of Sam’s life at will, directing him or misdirecting him indiscriminately. After each soul is rounded up, Sam must deposit it back into Hell, the portal to which is the local DMV (the show’s one really good running gag). Wash, rinse, repeat.

When he’s not acceding to the Devil’s whims, Sam is navigating his “will they/won’t they” relationship with his friend and co-worker, Andi (Missy Peregrym). This forms one of the show’s early overarching narrative strands, which mostly fails due to the lack of chemistry between the two actors, and the fact that Andi is just not all that appealing (much better is the chemistry between Sam and his best buddy “Sock”).

The other narrative arc, which is picked up and discarded seemingly at whim, is Sam’s parents’ involvement in all this, which the show seems to conveniently forget for long stretches at a time, even though it seems sort of a big deal at first, and turns out to be a big deal in the season finale. And this points to the larger problems of the show.

Reaper is terminally unsure of what it wants to be, and its refusal to congeal into anything definitive undercuts its various strengths and its appeal. It can be quite funny in bits, but it’s not really a comedy. It wants to delve into the back story and have some sort of narrative mythos about Sam’s relationship with the Devil, but it never follows up on the few hints it drops in its few myth-arc type episodes.

And it dabbles in darkness and the lines between good and evil without ever really asking any difficult questions or exploring any sort of moral quandaries, which one would expect, when one of the main characters is Satan. Wise’s Devil is more impish than diabolical, though as the series progresses a certain amount of grimness begins to descend on the proceedings. But still, its comedic undertone consistently undercuts any sort of gravity in the end. As the show winds up in the back third of its 18 episode first season run, there are hints of it turning into something that would compel weekly tuning in, but it’s perhaps too little too late.

So, it’s a tough call. It’s not that exactly that Reaper is lacking in charm, humor, wit, or narrative interest. It’s just that, much like its slacker heroes, it has a hard time realizing its potential in these areas, and is more often than not merely content to coast by with minimal effort and frustrating inability to follow through every time it starts to take a turn for the promising. And maybe that’s the point — the form matching the content. But I think not. I think it’s merely a lack of creative writing, and sure handed direction, and it’s just too bad, because it’s a show I want to succeed, and want to enjoy, immensely.

The presiding ethos of underachievement seems to hold sway in the extras department as well, which, aside from a gag/blooper real and some deleted scenes of negligible worth, are pretty much non-existent aside from a stray audio commentary. I was at least hoping for a guided tour of the underworld from Ray Wise. Or at least an interview. But no, the Reaper package is discouragingly barebones.