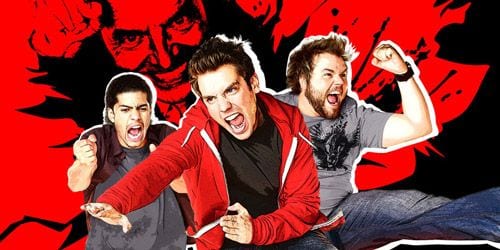 On David Lynch’s inscrutable and fabulous Twin Peaks, Ray Wise played Leland Palmer, the devious father and murderer of the show’s central teen girl, Laura Palmer (Sheryl Lee). Where Wise then channeled a slick sales-manager smarm and barely concealed rage, on Reaper, he is much more extravagantly devilish. In fact, as the Devil, he is cheeky and wink-winky, without any bluster. Set against Reaper‘s slackers and the largely limited actors who portray them, Wise will having you rooting for the Devil.

The Season Two premiere finds Sam (Bret Harrison) struggling with the idea that the Devil is his biological father. (Is the Devil “biological”?) He’s been working for the Devil for a while, paying off a debt incurred by his human parents by collecting evil souls who have escaped from Hell. Now that he’s found out the Devil’s actually his Dad, Sam wonders if he might work this to his advantage.

Handed a particularly prickly bunch of souls to collect, Sam tries to weasel out of it by appealing to the Devil’s sense of fatherly indulgence. While the Devil admits he likes Sam’s “spirit of nepotism,” he informs his scion that he’s not getting any passes because he’s the boss’s son. As the Devil asserts, “All I’m saying is, you’re not as special as you think you are, buddy… Don’t you forget that.”

This one withering remark puts Sam in his place, right back among the other wage-slaves Sam works with at corporate, big-box behemoth “The Work Bench.” Here Sam suffers the usual indignities of nitpicking, uptight managers and corporation tools, while watching any more fulfilling future slip away. It’s no surprise that in this environment, Sam retreats into a fantasy where he is directly and daily responsible for saving the world from evil.

The soul-sucking grind of underclass life is exacerbated by his other job, as Reaper. After collecting escapees, Sam must drop them off at the nearest collection station, housed in the local Department of Motor Vehicles. As we all suspected, those zombie-eyed civil servants behind bulletproof glass are really Satan’s underlings.

The difficulty of escaping poverty — or at least underclass disappointment — is a regular theme on Reaper. At the beginning of the Season Two premiere, Sam and his pals “Sock” (Tyler Labine) and Ben (Rick Gonzalez) are literally homeless, and reduced to camping out surreptitiously in “The Work Bench” when the store is deserted at night. Andi (Missy Peregrym), Sam’s love interest since high school and currently a fellow corporate drone, is similarly frustrated. Apparently smart and driven, Andi wants to go to college and to get out of the degrading world of “The Work Bench.” However, with both her parents dead, Andi is on her own and without resources. Her repeated attempts to figure out a financial solution to college fail, and she returns dejected to the big box store.

And so, like Sock and Ben, Andi willingly participates in Sam’s fantasy of relevance. Of course, in the world of Reaper, Sam’s aegis is not merely fantasy, and he is directly responsible for putting away the bad guys. As such, Sam is firmly established as a working class hero. In this, Sam and Reaper offer an antidote to the more common and much more popular class-aspiration shows on The CW, whether comedies like Privileged, or teen and tween soaps like 90210 and Gossip Girl. Sam, Andi, Sock, and Ben demonstrate that upper class dreaming is just that, and that pulling oneself up by the bootstraps is more difficult than the normative fantasies of the American Dream would have us believe. When he’s not out saving the world, Sam returns again and again to “The Work Bench,” punches the clock and restocks the shelves.