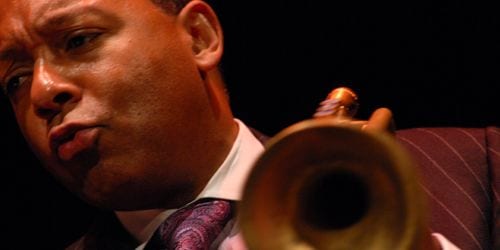 Wynton Marsalis
He and She
Blue Note

I do not know what fire burns in Wynton Marsalis’s belly, but it drives him to amazing and strange feats. Once upon a time, it drove him to learn and play his horn as no trumpeter had before him. It led him to master, truly, both jazz and classical styles, and then it led him to study and emulate the great compositions of Duke Ellington, eventually earning him a Pulitzer Prize for Blood on the Fields. It even led him to become an international leader in music education.

But the fire also drives Marsalis toward hubris — pronouncements about what is and isn’t “jazz”, and high-concept projects that for all their ambition seem strangely the same. In the case of Marsalis’s fifth Blue Note release, the concept includes a long poem — read aloud by the trumpeter — about the relationship between men and women, interspersed with new music for his quintet.

Let’s tackle the poem first. Marsalis is not a poet, and this is not the place to judge his literary skills. However, as a framing device for a set of jazz tunes, the poem seems at best unnecessary. Surely a producer at Blue Note suggested merely printing it in the CD booklet as a reference for the song titles (where it, in fact, appears) rather than interrupting the music with the likes of:

My heart is a swallow

Swooping down to taunt

disguised as a man.

(What passions could cosmic

If a man too scared to ask a

Whether these verses are your thing or not, I’d be surprised if you wanted to hear them every time you felt like spinning He and She — not to mention hearing the entire recitation repeated without musical interruption as the disc’s last track. (Other Marsalis tics are on display in the CD booklet by the way: the gaseous essay by Stanley Crouch casting Marsalis as the Moses of modern jazz, and a rhythmic “analysis” of each tune describing the various grooves used, in order of their appearance.)

The main event is the music, as it should be.

The vehicle this time is Marsalis’s quintet, which played with great strength on From the Plantation to the Penitentiary and with such warmth on his Willie Nelson collaboration Two Men with the Blues. While this group does not have the same range of dynamics and color as Marsalis’s septet of a decade ago, the leader contributes arrangements that consistently exploit his players’ vast range.

Though Marsalis continues to explore the span of styles that he loves — like a historian who can’t help but include every detail in every discussion — He and She makes this multi-faceted approach is a strength in most cases. The quintet never plays with anything less than commitment and command, and the music only rarely feels museum-y.

“The Razor Rim” is the longest track here, and it is consistently bold and swinging, a no-nonsense performance for a modern jazz group containing several soloists with the imagination and muscle to build improvised excitement over a long form. The concise melody and then Marsalis’s solo are placed over a swinging waltz feeling that invites pianist Dan Nimmer to dig into his McCoy Tyner bag. Marsalis plays without affect or pressure, light but muscular. A brief interlude shifts the track into potent 5/4 time for a solo by tenor saxophonist Walter Blanding, who plays with expressive power and a huge sound, blanketing your ear with a metallic wail that takes advantage of quick and repeated two-note figures across wide intervals. Marsalis returns for a section of gorgeous playing over swinging common time, with a section of semi-strangled downward runs that show how free his conception can be. Nimmer’s swinging solo is equally imaginative and exciting, climaxing joyously. Ali Jackson also solos boldly in a 12-minute performance that doesn’t contain a dull moment.

There is less enchantment in “School Boy”, an attractive melody that begins in an early 20th century ragtime groove, but seems like one of Marsalis’s self-consciously imitative exercises. The rhythm section moves into 4/4 swing under the trumpet solo, but it seems like a bit of Marsalis parlor trick as the band (Nimmer’s dastardly ragged solo, and then Blanding’s Bechet-esque soprano) reverts to old-timey-ness.

Much of the rest of the disc is devoted to exploring waltz time in various forms, which brings a pleasing focus to He and She. “The Sun and the Moon” is a wonderfully atmospheric composition, with a Harmon-muted trumpet, a tinkling piano, and a romantically broad saxophone intertwining in a manner evocative of Ellington without being derivative. In the middle of disc, there is an atmospheric suite of tunes — “Zero”, “First Crush”, “First Slow Dance”, “First Kiss”, and “First Time” — unabashedly romantic essays in moderate tempos that trade in a delicate, lacey feeling. Marsalis uses written interplay between members of the quintet to maximum advantage, continually asking Nimmer to color and play written parts rather than merely comp like a traditional jazz pianist. Similarly, Jackson often plays non-traditionally, tapping out rhythms on tambourine or a snare rim. He and bassist Carlos Henriquez also bring a fantastic contrast on “First Time”, a Latin jazz “danzon” that grooves without having to be loud.

The 3/4 time Marsalis conjures on “A Train, a Banjo, and a Chicken Wing” is unlike almost anything else, described in the booklet as “3/4 Chain Gang Stomp Shuffle”, and it allows Nimmer to play dirty but not without blues elegance, leading to similarly lowdown statements by Blanding and the leader. It is always great to hear Marsalis, the sometime zealot of conservatism in jazz, literally shout through his instrument. And the last instrumental sounds on He and She are exactly that — James Brown cries of feeling over a rockin’ groove, except coming from the masterly trumpet of Wynton Marsalis.

And so, on balance, the experiments with feeling and form here easily outweigh the pretenses of the poetry or the self-conscious throwback elements. With He and She coming after the angry rebuke that was From the Plantation to the Penitentiary, Wynton Marsalis is up to something new and interesting. He has a quintet with a daring backbone, he is playing with fire, and he seems to be finding ways to convert his neo-traditional interests into a forward movement, drawing on multiple styles and historical periods.

With his “young lion” guise far behind him, it is encouraging to see that Wynton Marsalis may have also shaken off most of the weight placed on him as some official Spokesman for Jazz History. This should be the most productive period of his creative life — a commanding middle age where his ideas and skills are at their peak, but a new freedom has set in. The poetry aside, this is the Wynton Marsalis we’ve been waiting for.