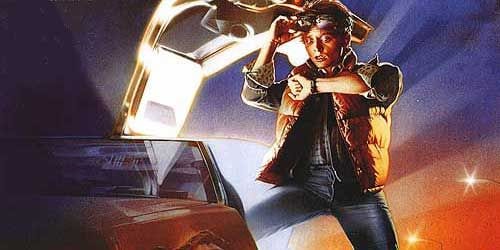 You’ve seen all three films already. Probably several times. And there’s no trivia or anedcote in the extensive supply of DVD special features that you can’t discover by skimming Wikipedia for five minutes. Nonetheless, I am here to suggest that Roger Ebert’s self-conscious endorsement of An Inconvenient Truth applies also to Back to the Future: “I have never written these words in a movie review, but here they are: You owe it to yourself to see this film.”

And if you haven’t already seen the Back to the Future trilogy, I’d like to direct another Roger Ebert quote your way: “There is no talking to you.”

But why should the rest of you take the time to watch it again? Simple: We have nearly arrived at the impossibly distant future year that Marty McFly visited in Back to the Future II, and now, looking back, the most irreverent, knowing, daring and hippest time travel story of all time has, fittingly and inevitably, become a time capsule. Back to the Future is set primarily in 1985, and today, 1985 is as quaint and comical as the film’s alternate setting of 1955 seemed in the ‘80s. In other words, the passing of years has added still another textural layer to what was already a dense, rewarding and astoundingly self-aware series of films.

Consider: the first thing Marty McFly does in 1955 is seek out a payphone. Good luck trying that today; when was the last time you even saw a payphone? Further, the gags involving Tab and Pepsi Free are now more disorienting than funny, and Doc Brown’s delightfully Rube Goldbergian automated kitchen device offers another small nudge of confusion; it dumps Kal Kan dog food into Einstein’s dish.

More noteworthy is that one is struck anew, in the age of Obama (I hereby apologize for actually typing the phrase “The age of Obama”), by the significance and silliness surrounding Goldie Wilson’s political aspirations; Lou’s Café’s proprietor’s bemused dismissal (“A colored mayor? That’ll be the day!”) is now more ridiculous than ever. Yet while we chuckled knowingly at Lou when we watched Back to the Future in the ‘80s, and chuckled even louder when the Doc Brown of the ‘50s scoffed at Marty’s claim that Ronald Reagan was President (“The actor?!?”), we’d have been just as cynical and dismissive as Lou and Doc had someone returned to 1985 from 2009 to inform us that our president 24-years hence would be a black man named Barack.

What really stands out today about Back to the Future isn’t the outdated fashions or slang, but rather this quiet revelation: Michael J. Fox is one of the most selfless and underrated comic actors of the last 30 years. The first film tries so hard to make Marty McFly cool, what with the skateboarding while holding onto tailgates of passing automobiles and the big ‘80s shades and the pegged pants. (And it worked; I’m in my 30s now, and yet some small part of me still finds that skateboarding trick neat.) Yet Fox cheerfully, consistently undermines his own cool momentum with a series of disarmingly baffled facial expressions and graceless slapstick pratfalls; Fox boasts the rare ability to make falling down seem truly funny.

Not to be outdone, Christopher Lloyd’s performance as “Doc” Emmett L. Brown, while seldom subtle (thank god), is undeniably compelling and funny, and sometimes even powerful. Doc’s dialogue is delightfully absurd, and yet even when wallowing in such exaggerated obliviousness as referring to a dance as a “rhythmic ceremonial ritual”, Christopher Lloyd earns our attention and belief. Early in the third film, the Doc Brown of 1955 grows exasperated with all the nonlinear hijinks, and shouts at an inexplicably returning Marty, “You can’t be here! It doesn’t make sense for you to be here! I refuse to even believe that you are here!” Lloyd’s delivery of these lines, coupled with his agitated body language, makes a potentially throw-away sitcom moment a highlight of a three-film series.

Another reason to revisit the series: while seldom mentioned in discussions of Back to the Future, Alan Silvestri’s score is every bit as stirring and majestic as anything John Williams wrote in the ‘80s. I have been humming the damned thing all week to celebrate my every trivial triumph, such as hauling out the trash or doing the dishes.

Meanwhile, I had forgotten (or perhaps never realized) that Back to the Future’s plot was so daring and disturbing. To summarize: the climax involves Marty’s plan to fondle his own teenage mother in order to get her angry enough at him that she’ll see George McFly (Marty’s father when he was a teen) as a hero when he kicks Marty’s ass. It’s like Steven Spielberg and Robert Zemeckis came up with a one-page treatment and then turned the reins over to David Lynch.

Another, less welcome surprise: having not seen the trilogy in over a decade, I was surprised at the jarring drop in quality the second film represented; once Marty and Doc go back to 1955 at about the halfway point, the film finds its way (the multiple Martys and Docs are like a delightfully demented and disorienting precursor to Lost), but everything that leads up to that final act is awkward, forced, clumsy and unconvincing. Michael J. Fox and Lea Thompson’s attempts to convey aged versions of their characters boast all the subtlety of a bad ‘80s sitcom, and the plot’s justification for getting Marty to 2015 feels strained.

In defense of the filmmakers, Robert Zemeckis notes in a special feature that, “We had never designed the first Back to the Future to have a sequel. The flying car at the end was a joke… everyone assumed that we had this grand design… Obviously, I wasn’t designing the movie for a sequel, ‘cause if I was, I never would have put the girlfriend in the car, ‘cause that became a gigantic problem in writing the sequels, and I would have only had the Doc and Marty be in the car.” (You might recall that Marty McFly’s girlfriend spends nearly the entire second and third films unconscious.)

Still, Marty’s bristling defiance whenever he is called “chicken” is a new character development that was never even hinted at in the first film, and while I hardly need the trilogy to be profane, the cuss words were peppered throughout pretty liberally, so should “chicken” really have struck Marty as such a provocative insult? And the producers speak often throughout the special features about their desire to avoid the stereotypical dystopian vision of the future, and yet they created an alternative present (1985) as grim as any Orwellian nightmare. (The special features reveal that the entire alternate-1985 plotline came about because Crispin Glover had unreasonable demands for returning, and so they had to write George McFly out of the narrative, and murder seemed as good an option as any.)

Ultimately, though, all is forgiven thanks to the sequel’s final act. I would even suggest that the weakest film of the trilogy has the strongest ending, and arguably the only strong ending (the first film’s ending is too silly and blunt, and the third draws the series to a close in a manner far too implausibly tidy and happy.) I can’t even watch Doc’s triumph after sending Marty back to 1985 in the first film without anticipating a leather jacket-clad Marty racing around the corner seconds later to seek Doc’s help again as that scene repeats itself in the sequel. Again: would we have Lost if we’d never had Back to the Future?

The chaos of Marty and Doc’s multiple selves is as compelling as ever, and I bragged to a friend on the phone that, while the characters commented on their other selves, even they (and presumably the writers) hadn’t caught on to the fact that there were, briefly, three DeLorians in Hill Valley on that fateful day in 1955; the friend in question had to show me up by reminding me that a fourth DeLorian resided in the hillside, buried by Doc in 1885.

Further, I love that the trilogy inspired a loving, ever so slightly insane chart called The Back to the Future Time Travel Chronology, and two wonderful and ridiculous Onion headlines: Chuck Berry Remembers Call From Cousin About White Kid Playing ‘Johnny B. Goode’ (“Marvin held up the phone and I heard the song that would make me famous. Then I stole it”) and Now More Than Ever, Humanity Needs My Back To The Future Fan Fiction (“Back To The Future is a timeless story of universal human experiences, like the quest for self-knowledge, overcoming adversity, and going to the school dance with your mother.”)

I’d like to close by quoting (or at least paraphrasing) still another film review, albeit one not written by Roger Ebert. There was a children’s movie released in 2002, and some critic or another was quoted in its ad campaign as having said that it was “This generation’s Back to the Future.”

I could probably Google that quote and come up with the title of the movie in question (and what would someone in the ‘80s make of my use of “google” as a verb?), but let us bask, instead, in the amusing glow of the fact that I would have to conduct some hasty research to even recall the title of the film that was so recently suggested as a replacement for Back to the Future.