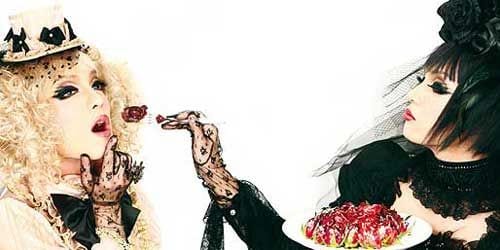 Japanese Goth examines “Gothic Lolita” as an iconoclastic, artistic and philosophical movement rooted in Eastern and Western traditions of horror and the grotesque. Even though the term “Gothic Lolita” is commonly associated with a teen fashion trend in Japan, this ambitious book is far from being a how-to manual on dressing in black.

In an introduction by the “bard of the Lolitas”, novelist Novala Takemoto establishes the tone for the rest of the book, navigating a tricky course between explaining in fairly vague terms what Gothic Lolita means, as a way of looking at the world, a “journey” and a “culture”, while denying that it can be explained at all: “In other words, establishing what defines Gothic Lolita is not up to any one person; it is up to the practitioner.”

This risks pretentiousness, but in the end it succeeds. The book isn’t likely to change the minds of people who think some of the fashions and hairstyles look silly (after all, do we really need more people who want to dress like vampires?); that doesn’t seem to be its point. Instead, the book seeks to place “Gothic Lolita” on the same level as “Gothic” in any discussions of art, literature and music.

It’s telling that the book’s title is not “Gothic Lolita” even though that’s its predominant subject. Perhaps that term is still too closely tied to the more ephemeral, fleeting and shallow-seeming realm of teen clothing. Titling the book Japanese Goth brings to mind the western world’s Goth music and fashions of the late ’70s and early-to-mid ’80s, while also providing associations with the beautifully creepy elements of Japanese pop culture, such as the J-horror movies of the ’90s, and the works of manga artists like Junko Mizuno.

Before and After Fruits

For most westerners, if there’s any awareness of Japanese fashion at all, it’s likely due to the popularity of the 2001 book Fruits, which was a collection of photos from the magazine of the same name, all by photographer Shoichi Aoki. The book featured the wild, unique, eccentric styles of clothes popular in the ’90s in the Harajuku shopping district of Tokyo, where young people would gather to show off their style, and stores and designers would sell clothes and accessories inspired by them.

The book caught on in the West, spawning among other things postcards, a sequel (Fresh Fruits in 2005), and a touring exhibition of the photos. Gwen Stefani’s 2004 album, Love. Angel. Music. Baby., brought Harajuku fashion even further into western consciousness, with a single and the tour’s backup dancers named “Harajuku Girls”.

Fruits included some fashions that could be considered Gothic Lolita, but overall it was more of an introduction to what was going on in Harajuku, and more than anything, perpetuated the notion that something strange and exciting was going on fashion-wise on the streets of Japan.

In recent years, Harajuku styles have grown and changed considerably, and the style known as “Gothic Lolita” has been gaining increased exposure in the West. Fruits‘s publisher, Phaidon, even released Gothic & Lolita in 2007, which imitated the style of Fruits and Fresh Fruits, but used different photographers.

It’s About More than Clothes

With its distinctive looks, links to Japanese popular music, and intense marketability, it would be easy to consider Gothic Lolita another clothing trend. There’s no lack of websites devoted to explaining exactly how to dress in Gothic Lolita style, with Tokyopop’s quarterly magazine Gothic & Lolita Bible being one of the most definitive. Among its typical influences are Victorian, Edwardian and Rococo fashions (think Edward Gorey). Other common elements include knee-length skirts with petticoats; shirts and blouses edged in frills and lace; bonnets and parasols.

But don’t come to this book expecting instructions on how to dress. Japanese Goth doesn’t delve into the minutiae of proper ensembles and accessories. It also avoids getting into the Gothic Lolita subcultures such as “Elegant Gothic Lolita”, or “Sweet Gothic Lolita”. Readers interested in the latest variation on the theme probably have their own sources for finding out what’s new. As Takemoto writes in his introduction:

“Let’s say punk rock was described to you as ‘three chords of rock music played roughly.’ Would that be sufficient? If you looked up surrealism in the dictionary and it was described as a style of art that uses unrealistic depiction, would you understand? In Japan, even now, people ask me ‘What is Gothic Lolita fashion?’ I tell them I don’t know.”

Japanese Goth avoids telling the definitive story of how Gothic Lolita started, and who the key players were in its development. That could be seen as a cop-out.

However, a little Internet research turns up several histories and conflicting theories as to the style’s origins and meanings, suggesting that if Japanese Goth were to have attempted the definitive cast and chronology, it might have diminished the book’s overall effect and intent, or at least dated it. As it is, the book achieves an odd timelessness: parts of it feel like they could have been published anytime in the past 30 years.

That being said, it does appear that many of the key players in Gothic Lolita’s development are here, from Takemoto, to musician/designer Mana, artist Mitsukazu Mihara, designer Naoto Hirooka, and the brand “Baby, the Stars Shine Bright”, to name a few of the contributors.

The cumulative effect makes a compelling case for seeing Gothic Lolita as more than Japanese kids dressing in black, or characters in an Anne Rice novel, or making a fetish of very young girls. More of that contextualizing and analysis would have been welcome in this book, but what’s there does the job well enough.

Image found at This Flicker page

So is Gothic Lolita really part of a culture with ties to worlds of art and literature, and not just a way to dress? The book’s assertion seems to correspond remarkably well with other writers’ musings on Gothic.

For example, in his 1997 essay, “Unsolved Mysteries: Gothic Tales from Frankenstein to the Hair Eating Doll”, curator Christoph Grunenberg writes: “In stylistic terms, the Gothic is closely related and sometimes convergent with the grotesque: an excess of complex and intricate decoration with bizarre distortions and exaggerations of human, animal, and vegetable forms.”

Japanese Goth revels in that excess of complex decoration and grotesqueness. The chapter “Jardin de Bete” describes how “animal-human hybrid forms also draw on the idea of animism in Eastern thought, wherein various animal topologies are used to discern the basis of one’s character.” The chapter goes on to feature wonderfully bizarre paintings by Takato Yamamoto, one of a young girl and one of a young boy, whose placid expressions belie the horror of their configurations (which include tentacles, exoskeletons, eyeballs, and teddy bears).

Then there’s prolific writer and chronicler of many things Gothic, Joyce Carol Oates, who could have been describing Gothic Lolita’s spooky little girls when she wrote in 1994’s, “Reflections on the Grotesque” (after describing how Alice in Wonderland was her formative artistic experience): “Like fairy tales, the art of the grotesque and horror renders us children again, evoking something primal in the soul.”

Along with the “Little Ones” chapter mentioned above, Japanese Goth dedicates an entire chapter to Wonderland, and more than one on the themes of horror, the grotesque, and childhood.

And finally, renowned semiotician, critic and novelist Umberto Eco could have been summing up much of the Gothic Lolita sensibility in this line from his 2007 tome, On Ugliness: “Marginal as the voice of art may be, it attempted to remind us that…there is something implacably and sadly malign about this world.” This rings true with the overall experience of reading Japanese Goth.

Black Cover Made for Smeared Eyeliner

Weighing in at a hefty and glossy 240 pages, well over 200 of which are full-page, full-color photos and illustrations, Japanese Goth feels like a subculture’s bible.

The striking, jet-black front cover features a young woman who could be Eurasian, emerging from the darkness and looking like a character from a J-horror movie, and the book’s title in a font reminiscent of Tim Burton and Cure album covers. The back cover art is an intricate and bewitching black and white line drawing by Yamamoto called “The Strange Tale of Edo”, after the famed Japanese ghost story “Botan Dōrō“. The front and back covers capture the book’s essence of cross-cultural pollination, dark-tinged fashions, youth, literature, and fine art.

In one sense, this book is perfect for identity-seeking young people with a dark and melancholy artistic bent, and it will lead them on to other interesting works of art. For grown-ups, it’s an absolutely beautiful and thought-provoking art-experience that will expand their cultural knowledge and inspire further readings.