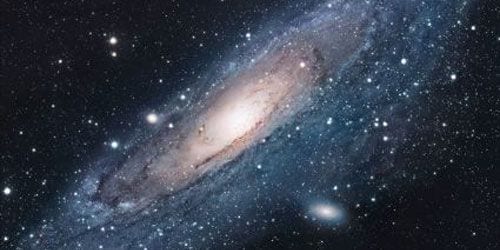 The story of the universe is one of unfathomable distances and inconceivable smallness, an epic tale that holds within it the secrets of existence. How sad then that the only creatures (that we know of) who are capable of illuminating these hidden truths are largely content to live their lives oblivious to the fundamental forces which have shaped their being. The problem lays in the stereotypical characterization of scientific pursuits, as impossibly complex thickets of theorems designed by aloof academics, a hurdle to overcome or avoid rather than a rewarding and invigorating course of study.

In schools and popular culture, science is portrayed as a remote vocation populated by monastic geniuses who exist outside of everyday life, toiling amidst tedious, brainy minutiae. The truth of the matter is that the frontiers of science, both intergalactic and subatomic, are startling and exciting realms lying in wait for intrepid adventurers to unlock their hidden treasures. Conveying this to the public at large, that there is a new Age of Exploration dawning, is essential to ensuring the viability of future research and discovery.

There have been a few successful attempts at bringing the public’s attention to these profound matters, most notably Stephen Hawking’s A Brief History of Time and Brian Greene’s affable meditation on string theory, The Elegant Universe. Being written by physicists, however, these books still struggle to reach audiences who may be intimidated by their authors’ colossal intellects and stature. The average reader needs a guide whom they can feel comfortable with, who can anticipate their concerns and relate the unrelatable, knowing just how to interpret these complicated topics in a way that makes tangible sense yet retains the integrity of the often abstract information. Christopher Potter is not a scientist. He is a skilled writer with a sincere interest in the search for the secrets of the universe, and his book is a layman’s compelling journey that succeeds in mapping out the complicated evolution of science and its quest for knowledge.

You Are Here unfolds along several dimensions, describing the sizes and scale of the universe to its horizon, the increasing smallness of its essential particles, and its birth and expansion over time. The book is not merely concerned with the big, galactic picture, however. Potter spends a lot of time exploring the progression of science, from its genesis in ancient philosophy to today’s modern scientific methods. In a virtuosic chapter, he neatly explains the history of scientific thought from its earliest thinkers like Plato and Aristotle to contemporaries Hawking and Greene, with brief yet revealing synopses detailing their contributions to our understanding of the universe. Potter shows how each new theory built on previous ones, and how our present knowledge of our world is the result of constant proposition, experimentation, and reevaluation. He also charts the evolution of life on Earth, and follows humankind from its earliest known origins as it crisscrosses the globe and solidifies its dominion over it.

You Are Here is replete with information that is simultaneously exciting and frightening. Potter is not afraid to challenge his audience by taking them to the boundaries of meaning. His descriptions of Planck length and time, the shortest possible measurements of length and time “that [have] any meaning” as length and time, in a sense, the line between nothingness and somethingness, are provocative, forcing one to abandon ideas and expectations drawn from everyday life. Potter’s description of the universe’s life does not just cover its past but its future, which does not hold much promise for the fragility of life. The stark reality of our Sun’s eventual demise, five billion years from now, is not meant to chill, but the finality and inevitability of it (and, presumably, our) end, is an arresting thought.

You Are Here is a triumph of popular science that clearly and succinctly elucidates the significance of the subject at hand. It is a book that should be put into the hands of every high school freshman, so they may better understand the goals and purposes of physics, astronomy, biology, chemistry, and anthropology before their leaden, lifeless textbooks chase them out of science classrooms. It is a book that should be read by adults, to attain a fuller picture of how our world works, so they may take some time to fully contemplate the enormity of what surrounds them and the improbability of their own existence.

Potter’s greatest achievement is a thoughtful and easy-to-follow explication of quantum mechanics, a field of physics that even physicists have difficulty comprehending. The quantum world is strange and alien, yet without it, the familiar world would be impossible. With a deft sense of narrative and gentle tenor, Potter leads readers through the quantum foam of quarks, gluons, and neutrinos, taming these wild particles for public consumption.

Potter asks readers to accept two seemingly contradictory notions: that humanity is not the center of the universe (literally or metaphorically) and that the universe relies on humanity for meaning. “It’s not about us” is a mantra that Potter drills into the consciousness of the reader as he illuminates the insignificance of humans on the grand scales of space and time.

At the book’s close, however, Potter acknowledges that our own perception of the universe is what gives it meaning. “Meaning, independent of us,” he writes, “is meaningless.” It’s a metaphysical paradox that mirrors the double-slit experiment of quantum physics, where a single particle is shown to exist in two places at once. It defies our conception of reality, but nevertheless is real. It requires human beings to humble themselves and to accept the limitations of their understanding. Only then can the pursuit of truth commence in earnest.