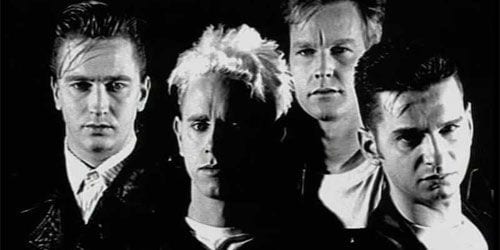 A small note on the back cover of Depeche Mode: the Dark Progression warns, “This film is not authorized by Depeche Mode or their record company.” I wondered exactly what type of documentary was contained within. “Unauthorized” typically implies that the work will be dealing with topics the subject would prefer remain hidden and my immediate expectation for the film was that it would be filled with scandal and vice; a feature-length version of VH1’s Behind the Music.

With two members leaving on less than amicable terms and a well-publicized battle with drugs, I felt safe in the assumption that Depeche Mode’s personal issues would be numerous enough to fill the film’s 97-minute running time. Depeche Mode: the Dark Progression defied my expectations, however; completely avoiding prurience for a reverent and academic investigation of the band’s music, their rise to fame, and their lasting influence on the music world.

The Dark Progression is structured largely as an oral history, as interviews are given prominence over narration. Andy McCluskey of OMD, Gary Numan, and Thomas Dolby begin things by giving a detailed history of the underground music scene in early ‘80s Britain.

Depeche Mode’s formation occurred at an amazingly fortuitous time; an example of the eerily perfect timing that band seemed to have in those early years. Technological advances made the synthesizer affordable and portable and Kraftwerk’s growing popularity in Britain made electronic music a viable commercial endeavor for perhaps the first time.

Under the leadership of Vince Clarke, the fledgling band quickly secured a record deal and a charting single. The bulk of the documentary’s focus is on the period after Clarke’s departure and the addition of Alan Wilder. It’s this time that is referred to as “the dark progression” of Depeche Mode as they expanded their fanbase and grew into a more mature group than that of their earlier pop singles.

Producers Gareth Jones and Dave Bascombe give their perspective on the making of the key albums, Construction Time Again through Songs of Faith and Devotion, while biographer Jonathan Miller helps outline the band’s trajectory from the underground to international stardom.

Depeche Mode: the Dark Progression offers an amazingly thorough look at the band that will be intriguing to a much wider audience than just their fans. The film gives a detailed analysis of every factor involved in the band’s success and completely eschews any exploration of their personal lives in favor of an almost reverent celebration of their music.

It appears as if the documentary was trying to make a case for Depeche Mode’s musical talent since much of the focus is given to the songwriting process and the sonic landscapes of their albums. These were handled by Martin Gore and Wilder, respectively, so only minimal time is given to front man Dave Gahan, whose musical contributions were limited. This is an inversion of the typical band documentary format, where the hard-partying singers are given primacy over the true architects of a band’s sound. So much attention is given to Wilder’s contributions that it would be possible to read the film as a vindication of his comments upon leaving the group in 1995, where he cited a lack of “respect and acknowledgement” for his part in Depeche Mode’s success as the reason for his departure.

Gore’s songwriting abilities receive the highest praise, however, and are pointed to as the deciding factor in the band’s success and longevity in comparison to similar acts. Gore’s lyrics provided a humanity to counterbalance the band’s heavily electronic sound and the musicians and journalists in the film express their admiration for his ability to deal with dark themes within the context of radio-friendly pop songs.

As a purely historical record of the band, it’s difficult to find fault in Depeche Mode: the Dark Progression. No aspect of the music is left unexplored and even the most obsessive fan will be satiated by the level of detail.

Ironically, the humanity of Gore’s songs that the film praises is the one thing lacking from the film itself. It often feels as if the interviewees are talking about Depeche Mode’s music as an entity separate from the men who made it; an invention without an inventor.

A good deal of the film deals with the band’s exploration of increasingly dark subject matter, but never offers the viewer any reason as to why this was taking place. The omission of the human aspect allows the filmmakers to avoid discussing band conflict and drug use, but it also prevents the audience from making a true connection with the band as individuals.

The film takes the time to explore the band’s sonic transformation over the years but not the personal transformations reflected in their lyrics. Ignoring this element entirely is what keeps Depeche Mode: the Dark Progression from being a more powerful work; only half the story is being told.

The “unauthorized” aspect of the documentary may have given the filmmakers more freedom with which to work but it’s ultimately what keeps it from being great. It’s very good, however, and does offer an excellent analysis of the band’s music without the distractions of tabloid gossip.

Depeche Mode themselves appear very little in the film and only in the form of previously recorded interviews not made for this documentary. Those who do appear are a veritable who’s who of electronic musicians and journalists and their biographies can be found as the disc’s primary special feature.

Depeche Mode: the Dark Progression is as close to a definitive statement on the band as possible without their involvement. Although the inclusion of a more personal look at the members would have improved the film, it’s an excellent work that sets a standard for music documentaries that most similar titles fail to meet.