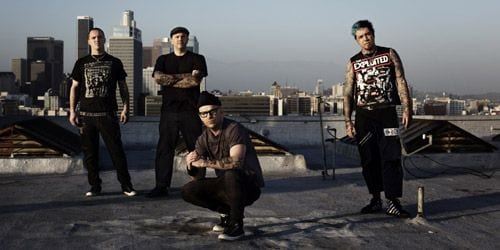 Perhaps the best indication of what constitutes a great punk band is its members’ abilities to think beyond the scope of their three-chord impetus.

There is nothing sadder than seeing a bunch of middle-aged dudes still trying to relive the glory of their humble beginnings by playing the same exact type of aggressive style they did 20 years ago. And when it comes to the California-based third-wave punk movement of the early-to-mid 1990s, a lot of these bands quite arguably still seem to be desperately clinging onto this youthful lifestyle that has not only outgrown them, but has become utterly mainstreamed and corporately streamlined by their younger contemporaries such as Good Charlotte, Fall Out Boy, Simple Plan or any of these other seemingly Hot Topic-fabricated bands who got spat out by the major label machine over the course of the ’00s.

Though they may look a little goofy still rocking spiked Mohawks and tattered attire as men in their early-to-mid-40s (save for new drummer, 31-year-old Branden Steineckert, formerly of the Used), Bay Area stalwarts Rancid display a sense of true musical growth on their long-awaited seventh full-length, Let the Dominoes Fall. The album marks their first work together as a band since 2003’s Indestructible — released on Hellcat in conjunction with Warner Bros. — and is a most welcome return to their roots on the Epitaph label, where they initially rose to fame through such seminal new school punk favorites as 1994’s Let’s Go and 1995’s …And Out Come the Wolves.

Let the Dominoes Fall serves as the true logical follow-up to their last proper release on Epitaph, the group’s masterful, misunderstood 1998 double LP Life Won’t Wait, a record that flexed Rancid’s abilities to stretch past the boundaries of their punk roots by massaging in elements of dub, funk, reggae and even hip-hop into what some consider to be their magnum opus. And while the primary crux of Let the Dominoes Fall‘s 19 tracks remains the teeth-shattering street punk bombast that has been the group’s calling card for over 15 years, with many of the tracks clocking in at no more than a minute-and-a-half-to-two minutes, such as the pummeling “Damnation” and the chugging “Locomotive”, there are plenty of sonic left turns that will surprise longtime fans while enticing new listeners to harbor a new appreciation for Rancid.

The most poignant of which is the album’s clear centerpiece, “Civilian Ways”, a touching, folk-country ballad sung by Armstrong about a soldier returning home from the war in Iraq, only to continue to battle the ghosts of the horrors he witnessed out in the desert and how it has affected him upon his return to civilian life. Post traumatic stress disorder has run rampant amongst this generation of war heroes fighting questionable conflicts both in Iraq and Afghanistan, and Armstrong’s beautiful and caring narrative will surely hit home for both soldiers and their loved ones in ways that such jingoist chest-pounders like Toby Keith and 3 Doors Down could never evoke.

Elsewhere, Freeman and Armstrong’s roots in the seminal late ’80s ska-punk unit Operation Ivy, whose legacy is celebrated on Dominoes’ opening track “East Bay Night”, ring loud and proud on tracks like “I Ain’t Worried” and “Up to No Good”, a song which features a special guest, soul legend Booker T. Jones, on his famed Hammond B-3 organ. The Clash has always been a significant point of influence on Rancid over the years, but in listening to the funky grooves of “That’s Just the Way It Is Now”, one can hear obvious traces of Mick Jones’ Big Audio Dynamite seep into the group’s sound as well. “L.A. River”, featuring the gruff vocals of Freeman, is a fun, frantic rip on old school West Coast drag strip rock, while the album’s mellow closer “The Highway” is reminiscent of Armstrong’s work on his outstanding 2007 solo debut A Poet’s Life. For those of you who are enjoying Rancid’s quieter moments, Let the Dominoes Fall is also being featured as a deluxe edition with a bonus CD containing acoustic versions of 12 tracks off the album.

While their fellow Cali punk comrades Green Day continue to ascend to a bloated state of arena rock sloganeering with their latest album, Rancid remain the dogged torchbearers of punk integrity on Dominoes, which in turn makes their musings on the crumbling state of the American way of life beneath the weight of corporate and political greed far more convincing than Billie Joe and the boys do on 21st Century Breakdown. Easily the band’s most political album to date, Armstrong, Lars Fredriksen and Matt Freeman trade verses on a slew of topical issues of today that paint a bleak, incendiary portrait of America in 2009. “This Place” describes a crumbling urban landscape eerily reminiscent of Braddock, Pennsylvania, a shelled-out former steel town on the outskirts of Pittsburgh that was used as a backdrop for the upcoming film adaptation of Cormac McCarthy’s post-apocalyptic novel The Road and was recently featured in Rolling Stone. “Damnation”, meanwhile, lyrically throws batteries at the windows of high rise corporate culture in a short, fiery beatdown that could have fit perfectly on the band’s self-titled 2000 album. The band also pays their respects to the city of “New Orleans” with a fiery call-to-arms style ode to the Katrina-ravaged city augmented with a scathing commentary on the governmental complacency that went down during the crisis.

“We got it right, you got it wrong, we’re still around,” Armstrong proclaims on Dominoes’ key single, “Last One to Die”. With this exceptional comeback album, Rancid back up that boast in spades and prove they are the only punk band of their generation who still matters — regardless of their age.