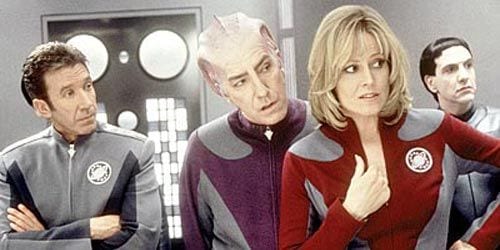 I am not a Trekkie (or Trekker, or whatever). Though I usually enjoy Star Trek episodes and films when I watch them, I rarely seek them out.

Nonetheless, I was very excited for the new J. J. Abrams Star Trek movie. I guess that was the idea, to re-energize the Star Trek franchise so that people like me would get excited along with the old guard of fans.

When I finally saw the new movie, after months of anticipation, I was satisfied, but not blown away. I liked the new depth added to the classic characters, but somewhere in all the black-hole-time-travel malarkey, I felt like the movie’s soul got sucked out. I had no investment in the welfare of Kirk, Spock, and the rest of the Enterprise crew, because a couple black holes later they could be different characters with different problems all over again.

As part of the franchise reboot, Paramount recently re-packaged many of its Star Trek holdings, including the original six movies and the first season of the original television show. For good measure, they threw in a tenth anniversary edition of Galaxy Quest on DVD. It’s been a while since I last saw The Wrath of Khan, but I’m going to go ahead and say that the Galaxy Quest Deluxe Edition DVD is the best thing to come out of this whole Star Trek rollout.

No, I am not a Trekkie. Turns out I’m a Questie.

Unlike the new Star Trek, Galaxy Quest is grounded in an Earthly humanity. It’s not realistic by any means, but again, unlike Star Trek, it doesn’t feel like it was made for an audience of half-human Vulcans. Galaxy Quest is comic science fiction that has human desires, rather than fan desires and decades of canon, at its heart.

If Galaxy Quest had never been made, a movie exactly like it would have been. It just reeks of inevitability. The movie begins with the question of how life would be for actors, like the cast of the Star Trek television series, whose persons are inseparable from their television personae. After establishing that this situation would be loathsome for actors who once assumed they were great in their own right, Galaxy Quest tosses the issue aside by putting those actors in a situation where they must fully become their on-screen personae.

During a fan convention, a group of Thermian aliens ask Shatner-like Jason Nesmith (Tim Allen) to save them from Sarris, an alien of another race bent on crushing the Thermians. Confusing the Thermians for fans of his television show, Nesmith agrees to play his Galaxy Quest role at what he assumes is a fan party.

Once he realizes that the Thermians are actual aliens who have actually built the spaceship from the Galaxy Quest television show (and have otherwise built their lives around the show, which they believe documents reality), Nesmith is excited to leave behind his life as a has-been actor to become the hero he has always pretended to be. The rest of his fictional crew comes with him, though they are quick to realize they are in over their heads.

Galaxy Quest is a family film, and some of the humor is clearly aimed at the younger set. Nonetheless, Nesmith’s (and his crew’s) adjustment to real outer space action is often very funny for an adult audience. Tony Shalhoub, as Fred Kwan, finds an especially unique and amusing way to deal with the weight of his new responsibilities as the Thermian spaceship’s tech specialist. The most humorous and influential elements of the comedy, though, are the Thermians’ attempts to replicate human speech and behavior (they’re close, but not quite there yet).

Galaxy Quest is a deeply satisfying piece of entertainment because it works not just as a comedy but also as a sci-fi action flick. Once Nesmith and his supporting cast get used to being actual spacemen, the film’s action becomes truly thrilling. I watched Star Trek in a theater with great sound and, days later, watched Galaxy Quest at home on an average-sized television. Galaxy Quest was more fun.

However human, funny, and thrilling Galaxy Quest might be, it has never quite caught on with audiences. I would hesitate even to call the film a cult hit. I suspect that Tim Allen’s lead in the film might have something to do with its lack of popular regard. Not that Allen does a poor job as Nesmith; in fact, he’s great in the role. The problem is that no matter the character he plays, Tim Allen is always Tim Allen, which really means he’s always Tim Taylor. Here’s hoping that enough time has passed since Home Improvement for this DVD release of Galaxy Quest to be given the full credit it is due.

The bonus features on the Deluxe Edition DVD are certainly geared towards canonizing Galaxy Quest as one of the great science fiction comedies. As with most DVD special features wherein the cast and crew talk about how awesome a movie is and how super it was to be a part of its creation, the brief documentaries here are a bit dull and add little to the enjoyment of the film. However, they are intermittently worthwhile for an insight into the movie’s special effects or an enlightening comment by a member of the cast.

What isn’t worthwhile at all is the Thermian audio track offered as one of the sound options for the film. Amazingly, someone decided it would be funny to record all of the speaking parts for the duration of the film in the dog-bark-like language of the Thermians. In other words, someone wasted a lot of time, because it is very unlikely that anyone will ever sit through the entirety of Galaxy Quest in Thermian. The audio track gets boring and annoying after just a couple minutes.

In case there was any doubt about the target audience for this DVD, Paramount includes commercials for its new boxed sets of Star Trek movies and television episodes, as well as a trailer for the new film. But liking Star Trek is definitely not a prerequisite for enjoying Galaxy Quest.