Every bankrolled pundit who has ever complained about “fake news” needs to watch A Private War. Journalist Marie Colvin went to the war zones that would make these weekend warriors cower in the back seat of their daddy’s new Mercedes. She was also a fascinating emotional paradox. Director Matthew Heineman, thanks to a fearless performance from Rosamund Pike, captures the nuances of Colvin amidst the constant danger of her field reporting. Unrelenting, passionate, and churning with humanity, A Private War is a film befitting its remarkable heroine.

Colvin was one of the most respected reporters in the world during her tenure at The Sunday Times in London. Three times she won the coveted ‘Foreign Reporter of the Year’ award, and was named ‘Journalist of the Year’ in 2000. From 1985 until her tragic death in Homs, Syria in 2012, Colvin reported from some of the hottest war zones on the planet. Her reports were a testimony for the faceless, voiceless civilians lost in the political gamesmanship of warfare. Each time Colvin headed into the field and put pen to paper, death was a realistic possibility.

Yet, Colvin wasn’t a machine. She suffered the same doubts and fears that any mortal would suffer under such extreme conditions. Director Matthew Heineman ( City of Ghosts ,2017, Cartel Land, 2015) doesn’t shy away from her imperfections and insecurities, but he never uses them as cheap dramatic devices, either. Working from a Vanity Fair article by Marie Brenner, “Marie Colvin’s Private War”, Heineman’s roots as a documentarian (this is his first feature film) help him stay focused on the real story; Colvin’s ability to overcome her fears and show the world the “human cost” of war.

“You’ll never get to where you’re going if you acknowledge fear,” Colvin narrates over footage of a war-torn landscape. What was once a city is now only rubble; what used to be lives are now statistics. Heineman’s re-creations of battlefield peril are first rate, with whizzing bullets and fiery explosions providing a poisonous taste of Colvin’s daily life. The most terrifying moments, ironically, are when everything grows quiet. As Colvin and her trusted photographer Paul Conroy (Jamie Dornan) look out over a sleeping Iraqi cityscape, the faraway rumble of explosions make even this peaceful respite feel like a trap. 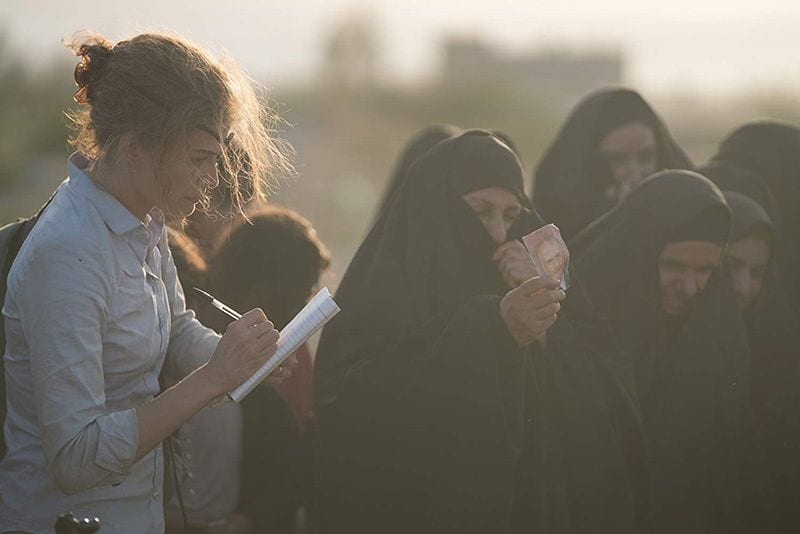 Heineman also gives us a glimpse into the battleground of big-time journalism. Colvin’s boss (Tom Hollander as The Sunday Times foreign chief, ‘Sean Ryan’) is constantly riding the line between concern for his correspondent and the desperate need to fill a 24-hour news cycle. Questioning Colvin’s mental stability, he sends a young reporter (Faye Marsay as ‘Kate’) to surreptitiously back-up Colvin on her assignment to interview Libyan dictator Muammar Gaddafi. It’s a brutal reminder to the aging reporter that despite her accolades, there’s always someone younger to take her place.

Mostly, A Private War chronicles the soul-crushing price Colvin paid for her dangerous calling. Divorced multiple times and left childless by two miscarriages, Colvin’s only reliable confidantes are alcohol and cigarettes. Her nightmarish visions aren’t relegated to sleep. Even something as innocuous as a flashing light or slamming door plunges her into a battlefield frenzy; re-living the close escapes and recalling the faces of the dead. After losing an eye to grenade shrapnel, she looks perfectly natural sporting a black eyepatch. Colvin probably reasoned that an eye was the least she could give for such a good story.

“You’ve seen more war than most soldiers,” Paul observes of Colvin, and Heineman is determined to re-create those battlefields as starkly as possible. Sweeping desserts and rubble… so much rubble… and the tight corridors provide egress from one disaster amongst the debris from one zone to the next. Everything is presented with the cold clarity of some demented nature documentary. These indifferent battlefields underscore the limitless depth of Colvin’s compassion. The tears she sheds for the dead children and wailing mothers are real. She witnesses the carnage so you don’t have to.

As Colvin, Rosamund Pike delivers a brilliant performance, simultaneously exuding obsession and vulnerability, like competing viruses within her frail frame. She stares down rifle after rifle with the steely resolve of a riverboat gambler. When a blockade of Iraqi soldiers stops her jeep, Colvin brazenly produces her health insurance card as proof that she’s a medical aid worker. She is absolutely fearless, imbued with the arrogance that comes from cheating death so many times. And yet Pike’s performance never feels puffed up or mythologized. She could so easily be broken, but she refuses to give injustice that kind of power over her.

Ideally, A Private War would spend more time with the victims that Colvin is fighting to protect. There are gut-wrenching scenes of young mothers forced to feed their babies sugar water because stress has left them unable to nurse, but these moments can feel manipulative in such small doses. Colvin’s personal life, too, feels truncated. A string of ex-husbands and lovers, ill-equipped to understand the rigors of her job, fight for the emotional table scraps. Not surprisingly, it’s Paul, her closest link to the battlefield, who eventually elicits a heartbreaking confession of her inner turmoil.

Still, A Private War isn’t noteworthy because it mythologizes a perfect hero; it’s noteworthy because it demonstrates that compassion is not a weakness. Caring deeply about others can be a source of remarkable strength, even in the face of unimaginable callousness and suffering. To act in spite of our fears is the only way to defeat fear mongering. Marie Colvin dedicated her life to ensuring that each death she witnessed had meaning, and the story was told. 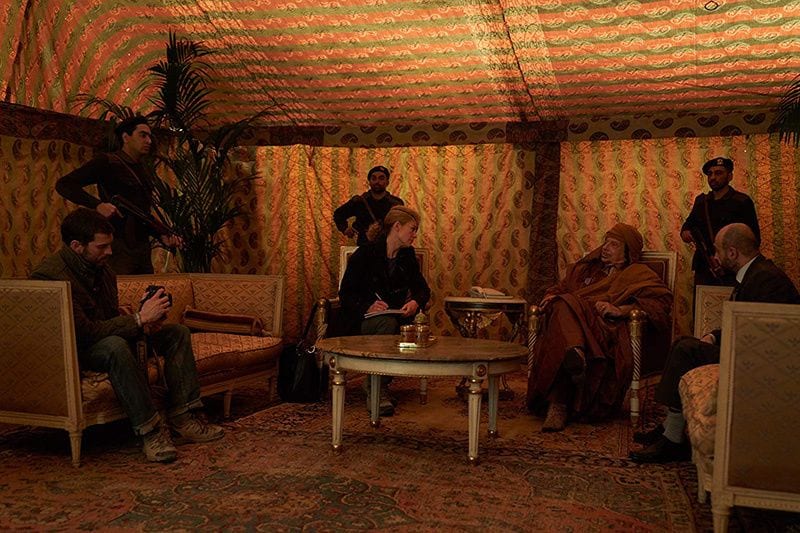