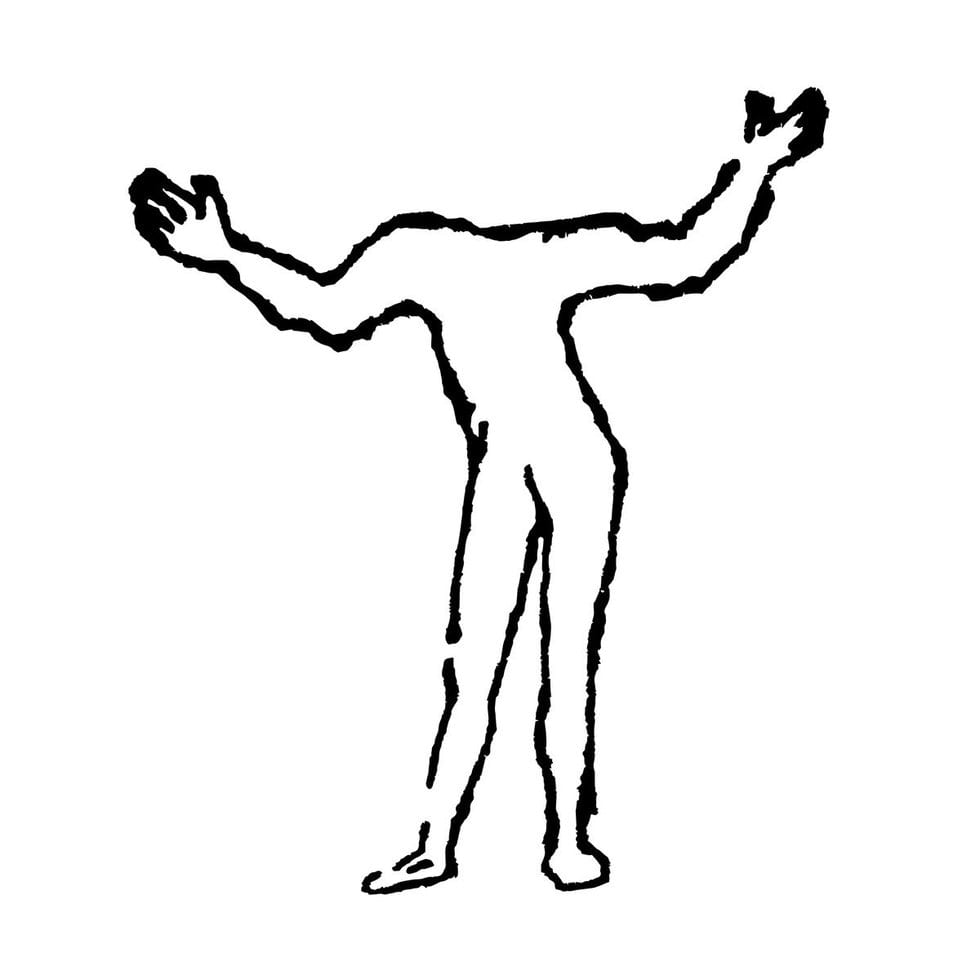 Augustine Arthur Bondy, also known as Scott Bondy when he was in the band named Verbena, now and latterly known as A.A. Bondy is, as you might infer from this nomenclatural restlessness, something of a tricky entity to pin down. Enderness is his fourth solo album. It is 37 minutes long. Those are some basic facts, but they also point to a fundamental disorientation around identity and stability of meaning, so we are immediately presented with some friction and uncertainty, even before we begin to encounter the music itself. So, having established even those basic facts, the story of “A.A. Bondy” and his new album Enderness already becomes a little murky from the outset, and this is part of its wondrous appeal. As one of the album’s songs has it, “I’ll never know every shape you can take,” and Bondy’s shapeshifting here is bewildering and transcendent at the same time.

By way of providing a little more background information, A.A. Bondy also has a Twitter account (this is relevant, begging your patience and indulgence a little longer before we get to the meat of the album itself). He has issued a total of seven tweets since 12 February 2019. The fact that A.A. Bondy has a Twitter account at all feels like something of an anomaly, given that the vibe of this album might lead you to believe that he might live more or less off the grid, in a more or less not creepy way. His latest tweet is a picture of him standing in the ruins of his burned down house. That seems both literal and entirely symbolic at the same time somehow.

Bondy finished recording Enderness the day before his house went up in flames. The tweet depicting the ruins and embers of his house is the only tweet that contains words. His other tweets are just pictures. The fact that he has issued seven tweets, only one of which contains words, seems entirely consistent with Bondy’s relationship to our current moment. A.A. Bondy is, as they say, in this moment but not of it. Enderness is a perfect album for our Zeitgeist, because it takes a relatively dispassionate, not to say a sardonic view of our cultural condition, but leaves us in no doubt as to the despair such a viewing should engender.

The word “enderness” does not have a meaning that can be identified in any dictionary, but it feels like a word that should exist, or that we should somehow understand instinctively. It’s almost but not quite tenderness, almost but not quite ennui, perhaps a mashup of the two, a depressing and approximate kind of intimacy. It also suggests the feeling of being present at the end of something, of being a dead-ender, of staying at the party just a little too long, knowing you should have left when it was still fun, to spare yourself that feeling of poignant, bittersweet regret and sadness that you are now that person, the one who stayed too long after it was effectively all over.

Enderness (the album, not the imaginary condition) gives you this kind of flicker of recognition without quite allowing you to identify with it completely. It’s an alienating album with which you might also sense a deep form of kinship and familiarity, neither of which feelings you can necessarily explain, either separately or together. This album sounds like it is coming to you from a long way away, while also being completely present and simultaneous with your current experience. There is nothing about the sound of this album that is in any way off-putting, and yet it instills in the listener a deep uneasiness, even a kind of dis-ease if you will. In this respect, there is something fundamentally uncanny about it. Enderness is an ultimately unknowable album that sounds utterly intimate as if it is being shared only with the individual listener as a form of confidence.

Freud described the Uncanny in his essay of the same name from 1919, a work that has formed the basis of various cultural expressions in the horror genre (among others) and its various more or less sinister offshoots, and has also underpinned many subsequent theorizations of the same. The Uncanny exists in its original German form as the word “unheimlich”, which means to suggest, at its most basic level of comprehension, a kind of discomfort and unease in the face of something that is both familiar and unfamiliar, recognizable and unsettling at the same time. This kind of uncertainty in the face of what we thought we knew puts us off balance to the point of being frightened, while we are at the same time unable to identify the precise source of the terror, like an itch you can’t scratch, but with rather more serious psychological consequences.

Freud offers some examples of the Uncanny in his essay as follows: “dismembered limbs, a severed head, a hand cut off at the wrist, feet which dance by themselves.” The cover of Enderness is a very basic drawing of the outline of a human figure, raising its arms in somewhat ambiguous expression, perhaps of exasperation, perhaps in an act of throwing down a gauntlet as if to say, “What? You want some of this?” The figure has no head. This album is, in the end, and in effect, a brilliant instantiation of Freud’s Uncanny (with a little bit of Brecht’s Verfremdungseffekt thrown in for good measure, the dual Teutonic phenomena working in tandem). That’s a lot to take in and perhaps a lot of pressure to put on 37 minutes of diaphanous synthetic blues music that lives in the generic interstices, but these two reference points seem both useful and instructive.

The opening track “Diamond Skull” puts all of this into perfect context and relief immediately and sets the tone for the entire experience. The song rehearses all the clichés and platitudes of our age as if Bondy has been lurking on social media for years, just taking notes. Although he’d only have to hang out there for about half an hour to get most of this, such are the enormity of social media’s potential and the depressing limitations of its actual imaginative scope.

The litany of inanities contained in the song exemplifies the words, phrases, tropes, and triggers of everything we see in our unending screen life every day: “Ooh la la, Swastika, Happy Birthday, Namaste, OMG, LMFAO, Hallelujah, I believe that I can fly, taste the rainbow.” That is just a sampling of the lexical Zeitgeist that Bondy rattles off here and it’s both completely familiar and utterly jarring at the same time. That is the way the album works, and it’s both deeply unsettling and almost instantly addictive. It feels like the reductio ad absurdum of the banality of our current evil moment, and it is precisely and chillingly accurate. If this doesn’t remind you with shame of your entire Twitter experience, then just put this song on repeat until the Bitcoin penny drops.

The next song, “Killers 3” continues the vibe of queasiness that characterizes the entire listening experience with a gently lilting melody whose opening lyrical gambit is “Murder / Is more entertaining / Than peace / Ever will be.” The second verse continues with, “Brother / Let’s go down to the river / Sing us a song / And we’ll do you wrong”. That once again entices us into a dangerous place with a pretty song, some innocuous instrumentation and Bondy’s bloodless vocal delivery, as if he has an innocuous white van he would like us to get into, but which we should enter at our own risk and perhaps almost certain peril. Bondy’s voice is not particularly strong or memorable, in fact, it is conspicuously ordinary, but it is the perfect instrument to deliver these oblique and jaded vignettes, all the more to unsettle us.

This is particularly true on the outstanding “Fentanyl Freddy”, one of the album’s singles a cautionary and once again chilling tale. Here is the entire lyric of the song:

That is in miniature the dramatic mis-en-scene of the entire album, as we realize the company we are keeping, and that they’re probably all tweeting from burner phones.

Enderness is also punctuated by three gorgeous instrumentals, “The Tree With the Lights”, “Pan Tran”, and the closing title track, which fades away into delicious oblivion. Any of these could easily have come right of the cutting room floor in Berlin during the recording sessions for David Bowie’s Low (1977). And indeed, what better touchstone for an album about alienation that feels simultaneously soothing and uplifting, albeit in the coldest of ways? In this regard it also recalls the bloodless and simultaneously very beautiful Peter Blegvad album The Naked Shakespeare (1983), but above all the entire experience is reminiscent of the most haunting and uncategorizable glories of the dearly departed Arthur Russell, whose willful determination to articulate joy, fear, and confusion beyond any generic boundaries has lived on way beyond his passing.

This entire experience feels enervated and entropic somehow as if we are running on the last fumes of culture and civilization, observing the wreckage and the ruins of what we have done to ourselves. It is hard to think of a better soundtrack to what currently seems like our inevitable demise, and Bondy captures it with a twinkle of mischief as he disappears as vaporously as he arrived. The economy of expression deployed here is impressive, at the same time that it feels as if the album has no beginning or end, but rather that it exists on a continuous dystopian loop. If you only listen to one album while the world burns, you could do worse than listen to this one.