Robert Altman is commonly held to have been one of Hollywood’s foremost filmmakers not only of the 1970s, but of all time. It is that special decade, however, with which he is most closely associated—undoubtedly, films like The Player and Short Cuts, which wouldn’t hit screens until the 1990s, remain among his most impressive of achievements—but few other filmmakers had as prolific or audacious of runs as Altman in the age of New Hollywood.

While one can make the argument that auteurs like Coppola and Scorsese made more classically significant marks with films like The Godfather (1972) and Mean Streets (1973), Altman did not find himself frantically floundering in the era’s dusk like other directors; while the end of the ’70s marked a period of creative misfires for myriad New Hollywood filmmakers, Altman was surprising us with opuses like 3 Women (1977) and A Wedding (1978). Against the prettily-packaged machinery of factory-line blockbusters like Star Wars and Saturday Night Fever, those films operated not only as bold and breathtakingly beautiful artworks, but as middle fingers to the impending establishment of the spiritual return of the studio system, and final, profound cries in defense of artistic integrity over financial gain amid the death knells of the American New Wave.

Altman made sure to dabble in it all: war (M*A*S*H, 1970), Western revisionism (McCabe & Mrs. Miller, 1971), psychological horror (Images, 1972), period drama (Thieves Like Us, 1974), musical satire (Nashville, 1975), science fiction (Quintet, 1979), the rom-com (A Perfect Couple, 1979)…the list goes on. Unlike many other filmmakers of the era, Altman capitalized on the power of genre versatility and utilized satire as both a creative catalyst and recurring auteur trademark. Satire, comedy, absurdity—these tools were jarring but not completely unexpected choices (all of them opposing forces to cinematic convention, political powers, and societal constructs) so simpatico with Altman’s liberal disposition that Ronald Reagan himself went on to label his 1981 experimental comedy HealtH “the world’s worst movie.”

Here we explore another experimental comedy in Altman’s repertoire, long confined to M*A*S*H’s more commercially-successful shadow (having been released in the same calendar year with far less mainstream embrace), 1970’s Brewster McCloud. Nearly 50 years later, it remains Altman’s most underrated work, and yet his most vitally important one for anyone—cinephiles and the greater population alike—trying to make sense of the very absurd America we now know. 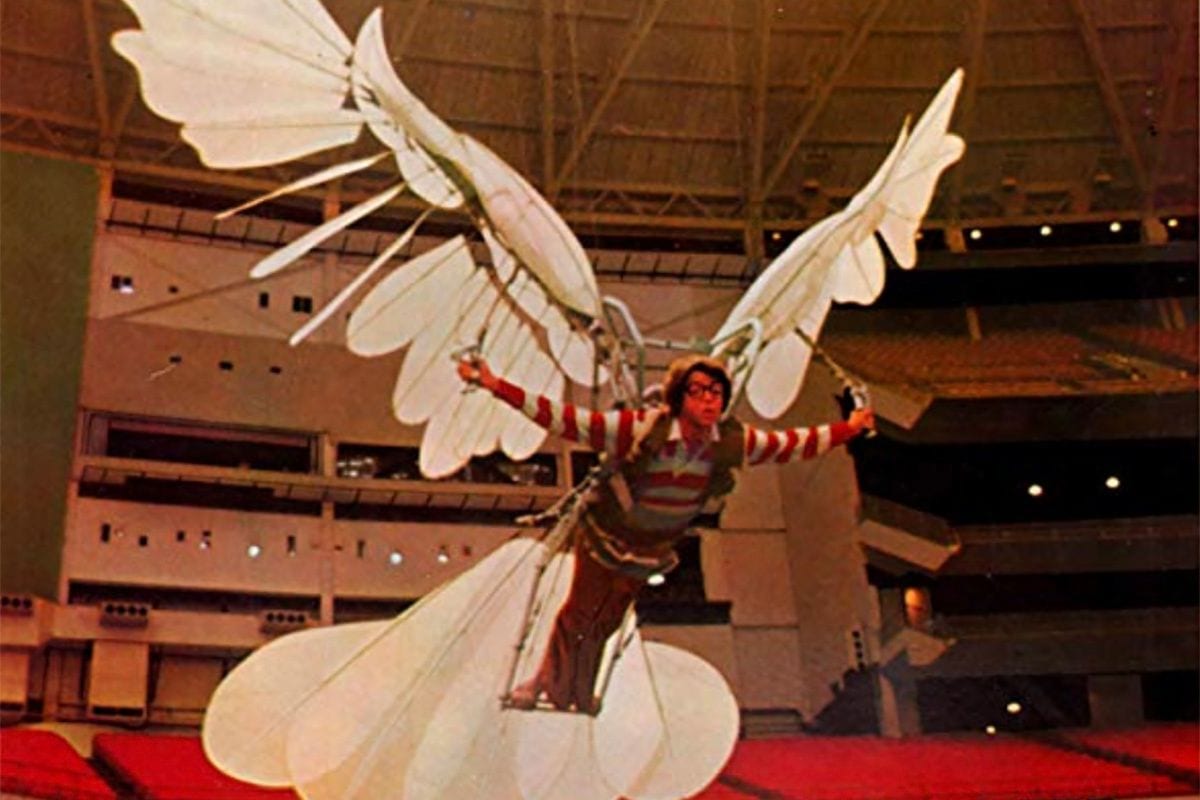 [Altman] is forcing us to sit with what feels uncomfortable, acknowledge absurdity, cognize the fact that we, as people, are floundering perpetually in a pool of lunacy and uncertainty, and not allow ourselves to blindly fall into the solutions and cookie cutter cut-outs the greater hegemonic forces have constructed for us—and beckon us to accept without question.

Brewster McCloud is a difficult film to pin down narratively—difficult, at least, through the lens of conventional Hollywood storytelling. At its core, it follows the exploits of Brewster McCloud (Bud Cort, pre-Harold and Maude) a bespectacled baby boomer living in the fallout shelter of the Houston Astrodome who is building a set of massive bird-like wings that will enable him to fly. He is aided by the efforts of Louise (Sally Kellerman, post-M*A*S*H, pre-Oscar nomination), a mysterious blonde woman in a beige trench coat who may or may not be his Guardian Angel, and who warns him against having sex should he wish to sacrifice his high-flying ambitions—advice he does not heed when ultimately losing his virginity to deceptive Astrodome usher Suzanne (Shelley Duvall, in her film debut). Simultaneously, Houston is plagued by a series of bizarre homicides with victims found covered from head-to-toe in bird droppings, and law enforcement (Michael Murphy and William Windom) unable to find the killer.

Brewster McCloud is New Wave filmmaking at its most unapologetic. Narrative and form become ultimately indistinguishable, beginning with a professorial man simply called “The Lecturer” (Rene Auberjonois) who speaks directly to the audience from his classroom and over the course of a narrative, inexplicably, transforms into a bird. Meanwhile, our first entry into the actual plot of the film has two starts: Altman’s lens pans from the ceiling of the Astrodome to Margaret Hamilton (the Wicked Witch of the West from The Wizard of Oz, no less) shrilly singing the National Anthem, which is later halted by her vitriolic claims that the band is in “the wrong key!” When she instructs everyone start over, Altman’s camera whips back up to the ceiling of the Astrodome where the film first began, as the opening notes sound and the image of bright yellow font reading “Metro-Goldwyn-Mayer presents” reappears for us.

Subsequently, our first substantial introduction to Brewster finds him as the chauffeur of a greasy money monger, Abraham Wright (Stacy Keach), who coerces cash out of homes for the sick and elderly. While Altman entertains this narrative thread for some time, he eventually decides to move on from it, leaving us with the image of a wheelchair-bound Keach veering aimlessly through a stretch of Houston highway, causing car collisions before himself colliding into a patch of asphalt where he is left dead and covered in bird excrement. And as for Brewster? Well, he just goes back to building his bird wings. 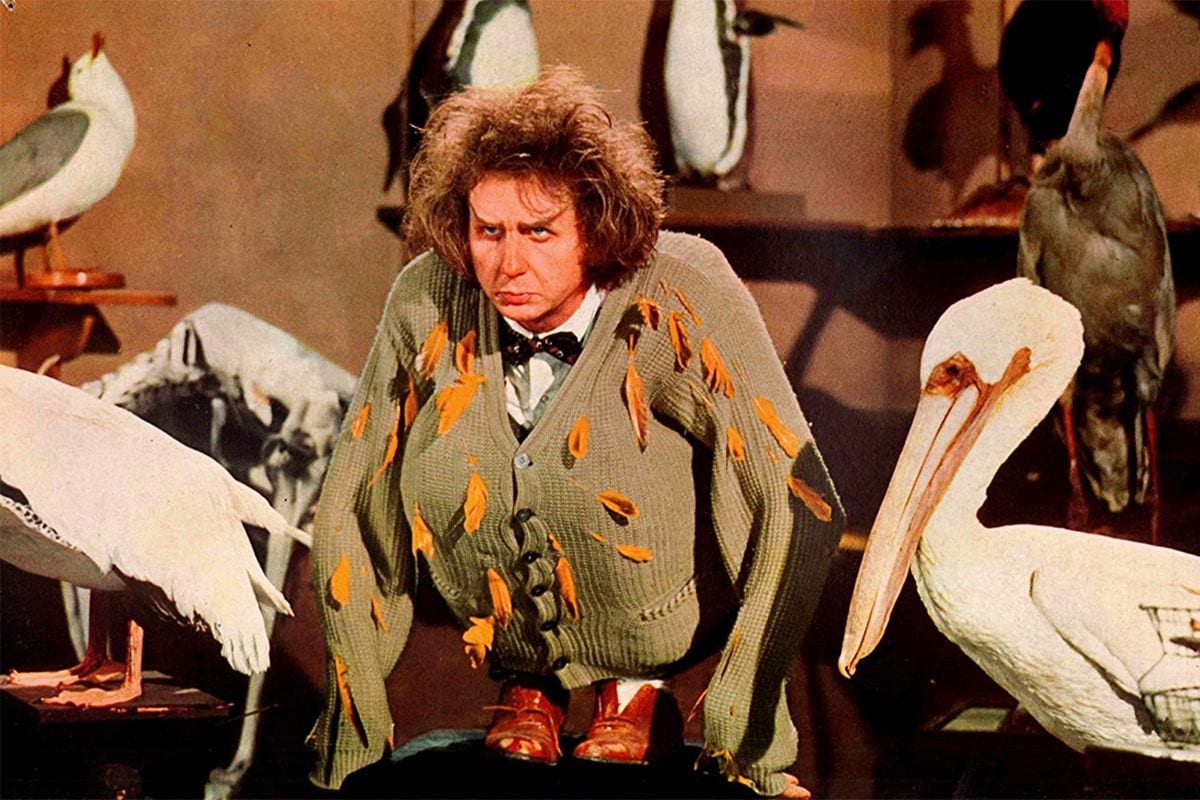 One might view the aforementioned choices as primitive and misguided, pointing to Altman’s seeming lack of talent or forethought as a filmmaker. By less adventurous standards, the abandonment of Keach’s narrative, and even the random thread of Auberjonois’ ramblings, come off as gaping plot holes and inconsequential distraction—random and stochastic storytelling techniques more readily found in the work of a filmmaker like Tommy Wiseau. But Altman knows exactly what he is doing, and it is precisely his deliberateness with such kookiness, and an understanding of the inarguably kooky social and political context that his film was borne out of, that elevates Brewster McCloud from inanity to excellence. Right from the start, Altman is letting us know that he is not discarding logic—rather, he is reinventing it. It is in the film’s very resistance to and reinvention of “normative” storytelling that we see its ultimate message and purpose, much like how Brewster’s own high-flying ambitions within the narrative come to resist and reinvent “normative” behaviors.

Furthermore, it is a film of mockery—particularly of hegemonic social constructs, and even the laws of the universe. Altman mocks aerodynamics: before his sudden death, Brewster does find himself gliding quite successfully through the air. Altman mocks the Male: Bud Cort, our hero and romantic lead, is the complete antithesis of lionized masculinity, Jennifer Salt’s character, Hope (a friend of Brewster’s who becomes seemingly obsessed with him), achieves climax on-screen without phallic aid, and it is by Suzanne’s sexual prowess that he—not her—becomes victim to fate. Altman mocks bigotry: every murder victim, from Margaret Hamilton’s Daphne Heap to Bert Remsen’s Officer Breen, is racist or morally-bankrupt in some way. Altman mocks the law: every police officer in the film is a bumbling caricature of himself found more readily in comic books (one is an avid reader) than in real life. He even mocks happy endings, and the hegemony of “high-brow” Hollywood cinema itself: as Brewster crashes to his death at the base of the Astrodome, a crumpled mass of bones and flesh beneath broken bird wings, a literal (and quite meta) stage show ensues that breaks the fourth wall and introduces each cast member, garishly costumed and made up, before subsequent title cards mark the end of the film.

It feels abrupt and anticlimactic, a tone-deaf conclusion that ties no loose ends. Our hero is dead, the crimes that inform the film’s core are never truly solved or brought to justice, and said incompleteness quite literally becomes a grave—simultaneously exalted and danced upon by a troupe of spaced-out circus freaks.

Asinine, right? No. Altman knows exactly what he is doing. He is not-so-subtly urging us to wholly embrace the behaviors and forces that spit on the reverence surrounding traditionalist and often oppressive mainstream ideals. He is forcing us to sit with what feels uncomfortable, acknowledge absurdity, cognize the fact that we, as people, are floundering perpetually in a pool of lunacy and uncertainty, and not allow ourselves to blindly fall into the solutions and cookie cutter cut-outs the greater hegemonic forces have constructed for us—and beckon us to accept without question. Why must the hero survive, or have a complete backstory? Why must a murderer be found and convicted? Why must we have full closure with the Abraham Wright subplot, or know of Louise’s future, or of Suzanne’s impending love affairs?

In the decades shortly following Brewster McCloud’s release, these questions might not have been easily answered, this sentiment a hard pill to swallow. But in 1970 America—an America defined by political corruption, war, economic straits, and post-Woodstock fatalism—absurdity, uncertainty, and lunacy was life. It is precisely under these political and sociological conditions that we must understand Brewster McCloud, as it is from these external factors that Altman crafted such an absurd albeit revelatory vision. Brewster McCloud is a film that exists distinctly, and almost exclusively, in the sociological imagination. It is no wonder, then, that its legacy saw little embrace in the succeeding decades; its commentary would prove oddly incompatible with the complex and differing morales America felt and contended with during the 1980s, ’90s, and ’00s.

Fifty years later, however, one must ask, is America in 2019 all that different from America in 1970? As we find masses of not only cinephiles but common moviegoers embracing Altman’s filmography with unparalleled gusto (he perhaps has the most works of any director catalogued in the Criterion Collection), it is important to recognize the affinity we have with a movie like Brewster McCloud that, once again, is compatible with our current social and political state. For, at this moment, we exist in an America, too, defined by political corruption, war, mass shootings, and continued racial discrimination and gender disparity. Thus, as it was in 1970, absurdity, uncertainty, and lunacy are life once again.

Resultantly, it is a work like Brewster McCloud, a work dependent on mockery, on subversion, on total creative and moral insurrection, that can give us the most power—the power to ourselves become said circus freaks dancing on the grave of an absurd and unjust society—and provide us with the most telling mirror of ourselves in a way that is most liberating. Because, much like meme culture of America today, for all of its lack of logic, for all of its “weirdness”, for all of its seditious, disruptive, and combative qualities, both in its narrative and in its own anatomy as an artwork and ubiquitous item of our culture…it still remains.

Brewster McCloud is the logical world turned inside out…at first glance. It is a world where men fly, where sexuality inhibits dreams, where fallen angels come to earth to shoplift and cavort in public fountains. It is no wonder MGM decided to market it as “a different kind of film.” Altman takes everything we know and are comfortable with, and facilitates seemingly the exact opposite of what those things are and stand for. Yet by doing so, he shows us that Brewster McCloud is not the antithesis of our society, but rather a reflection of it—and that, ultimately, our “logical” world really isn’t so logical after all.