A documentary on thrash metal, at the end of the day, is really just a Metallica documentary. The band’s first few albums not only raised the tempo on how fast one could feasibly shred but the music remains as benchmarks for this sub-genre of heavy metal. Furthermore, most of the band members in Metallica relocated to the Bay Area in the 1980s when thrash was born, where it burgeoned and, like any renaissance, where it eventually burned out.

Around halfway into the new documentary
Murder in the Front Row, a comprehensive analysis of thrash metal’s Bay Area upbringing, the members of Metallica recall touring Europe for their first time following the release of their 1983 debut Kill ‘Em All.

“We put the scene on the map,” guitarist Kirk Hammett shares while drummer Lars Ulrich gleams that they were “flying the flag for San Francisco.”

As the documentary firmly lays out through dozens of interviews with metal veterans, the arrival of Metallica to the East Bay (by decree of original bassist Cliff Burton) was when thrash metal bloomed. Soon after, the Berkeley club Ruthie’s Inn became the de facto venue for hosting local and touring acts. Bands began encouraging each other to play louder, faster. Then the buzz brought in the record company suits who searched for the best (or perhaps most marketable) band to promote. 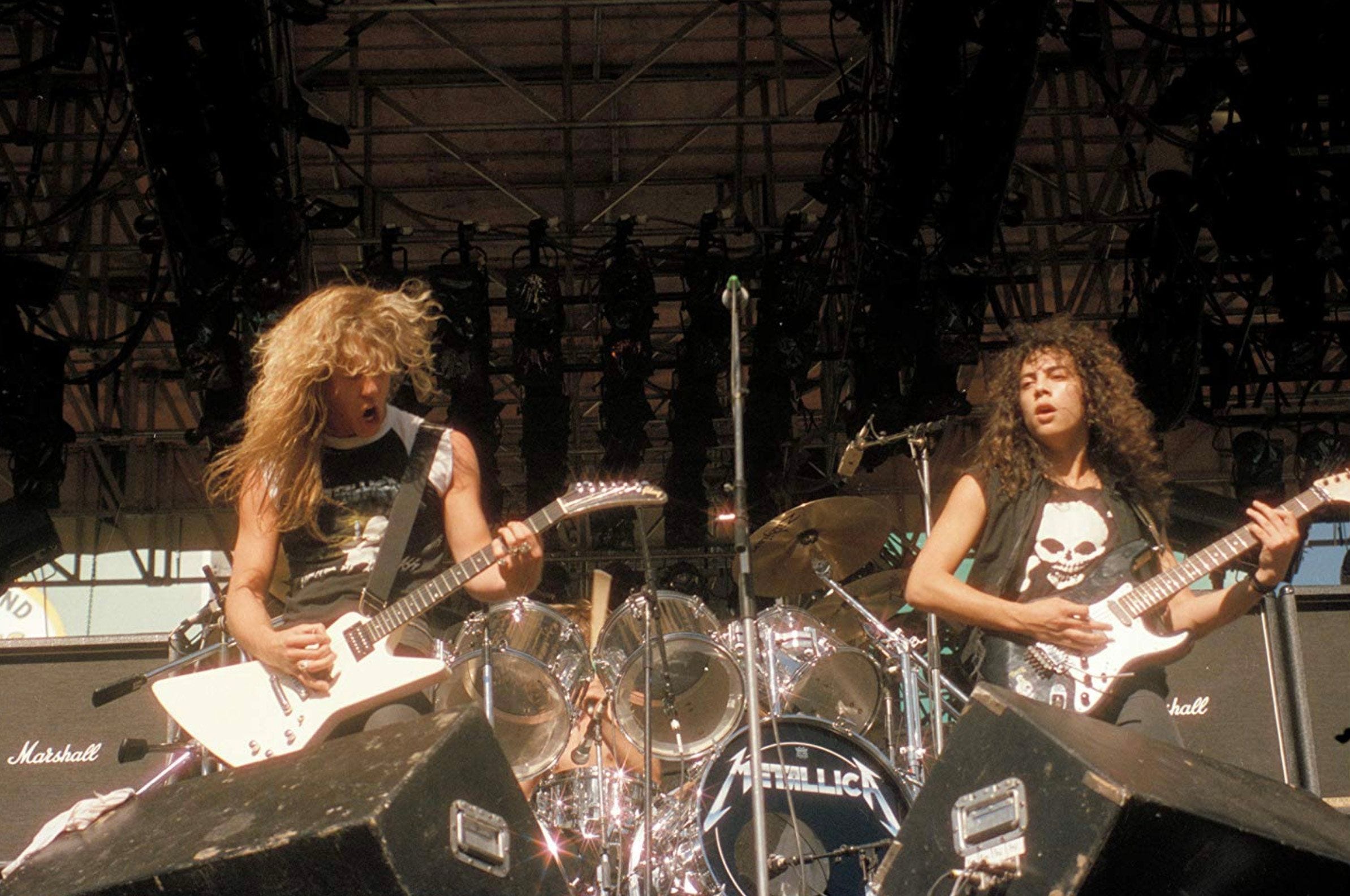 They found their band in Metallica. And from these humble origins, Metallica became the global metal act recognized by your grandmother and baby brother alike.

Thrash metal is fairly simple to comprehend. You either love it or loathe it. Which means a documentary on thrash’s renaissance during the 1980s in the San Francisco Bay Area will either be perfect for that Testament fan in every family or perceived simply as a glorification of noise pollution.

Murder in the Front Row takes its name from the first song on the first album by Exodus: “Bonded by Blood”. This title in and of itself could have served as the documentary’s name for how it captures this tightly-knit community of headbangers. They were united in their love of loud albums from 1970s heavy rock bands like UFO and most had a physical attachment to denim. They lived together, bred together and, as the documentary depicts, some died before reaching their 30s.

Director Adam Dubin was able to recapture some of the youthful excitement in his subjects as they discussed rich characters from the past, including the “metal mom” from Pinole, California: Debbie Abono. Abono managed the band Possessed as a spirited 60-something-year-old. (Google her name to see a smiling, silver-haired woman posing with some baby-faced Metallica members.) Upwards of 50 subjects were interviewed to resuscitate the bygone ’80s scene.

Dubin is no stranger to the scene, having directed Metallica’s “Nothing Else Matters” video and the documentary A Year and a Half in the Life of Metallica Parts 1 & 2, among other works such as the Beastie Boys’ “(You Gotta) Fight for Your Right (To Party)” and “No Sleep ‘Til Brooklyn” music videos. He’s a skilled director in tackling massive and sprawling subjects. But when the documentary follows members of Exodus as they pay tribute to the grave of singer Paul Baloff, who died in 2002, the film dips too deep into melodramatic antics and loses its grounding. The filmmakers also chose to omit the reason why Dave Mustaine was fired from Metallica (alcoholism) which was an odd oversight.

The merits in Murder in the Front Row lie in the decadent detail revealed by these musicians. When Slayer first came to town, they played Ruthie’s while wearing eye liner makeup and were promptly roasted for it. If you were a new band playing for this audience and you didn’t have the chops (or worse, you were a poser) then the audience’s reaction was a to simply turn their backs to the stage and fold their arms in protest.

Thrash metal’s zenith moment was perhaps Metallica’s performance in Oakland at Bill Graham’s Day on the Green in 1985. This was a hallowed Bay Area tradition where the biggest acts in music performed — Bruce Springsteen & the E Street Band, David Bowie and U2 to name a few.

Being that this was a big stage both literally and figuratively, Metallica chose to do what they do best: play loud. Cliff Burton’s bass intro for “For Whom the Bell Tolls” continues to inspire folks to pick up the 4-string. The band also decided to do as they do and trashed their green room which, for famed concert promoter Bill Graham, was a personal insult.

Metallica singer James Hetfield details in the documentary how Graham called him the next day to scold the young musician. Graham told him how he knew Keith Moon and other hard partiers of the day, and while they earned a reputation for living wild, they didn’t live long.

Hetfield explains how this early-morning chat with Graham was a wake-up call. Not much later, Metallica were earning Grammy nominations, maturing as thrash metal waned.