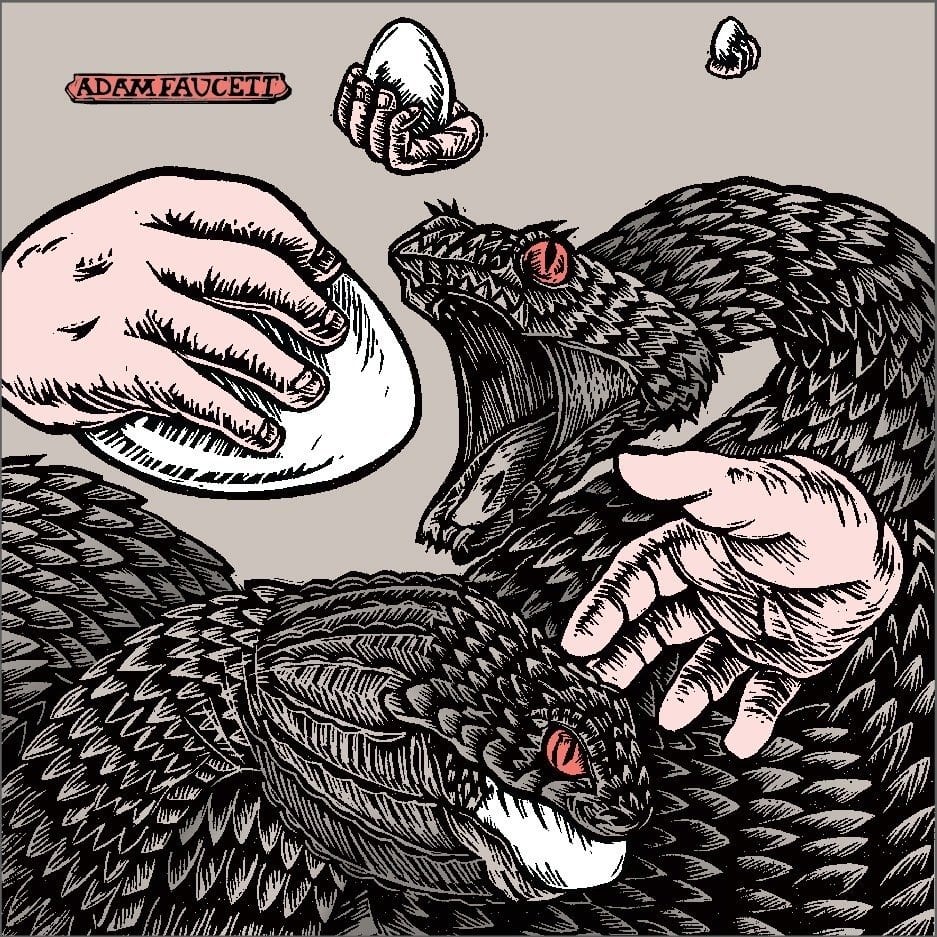 It Took the Shape of a Bird
Adam Faucett
Last Chance

Eddie’s Attic in Decatur, Georgia, is a “listening room” venue, which means that before each performance, there’s a polite announcement to shut up while the show’s on, and if you really need to talk or answer that stupid cell phone, that’s what the back porch bar is for. At least, that’s the way it is for the featured artist. Sometimes with the opener, they forget that reminder. Such was the case when I saw Adam Faucett open for Damien Jurado back in 2014.

Faucett, an unobtrusive, short, bearded guy in aviator glasses was his own roadie, setting up amidst the audience chatter that didn’t stop when he stood at the mic and began playing his first song. The chatter even amplified a bit as Faucett’s guitar began its ringing intro to “Daydrinker”, the lead track from his just-released Blind Water Finds Blind Water. Then, that voice, keening and ethereal: “I’ve seen all that I need to see / No, oh nobody is gonna out-drink me / It gets so lonesome in the afternoon / when you’re the only one with nothing to do.” The place fell silent and stayed that way, save for the hoots and cheers between each song.

That’s the kind of performer and songwriter Faucett is. He surprises you, takes hold of you, and doesn’t let you let go. Take “King Snake”, the opening song of his new collection It Took the Shape of a Bird. Faucett sings from the perspective of a young woman, orphaned and abandoned to cousins (“They need some little girl like I need hard lessons”) who formed the first in a long line of abusive men. Seeing a king snake in the woods, she opines, “How I wish I was like the king, where poison wouldn’t mean a thing” before turning to thoughts of vengeance.

Faucett’s songs land hard emotional punches through economic narratives and poetic realism. Themes of powerlessness populate these many songs, conveying a sense of just how hard it is out there in contemporary America. Faucett’s characters are people living threadbare lives with raw nerves fully exposed, short of fuse, and quick to violence, though that violence is just as likely to be turned on the self as if that’s the only solution to hardship and the only opportunity to feel, to find justification, or closure.

The album’s centerpiece is the beautiful, devastating “Dust”, a heartbreaking narrative of holding on while everyone and everything else around you breaks. “Some folks need god,” Faucett sings, “this I never understood / Until I saw the dust of rock bottom on the knees of my friend / And how it all was taken from him.” I haven’t heard a song all year that better addresses our current mental health crisis and its attendant issues of drug abuse and suicide as Faucett continues, “Yeah, the world ain’t clean / Put that gun down and lean on me / Let your god go and lay it on me.” The song builds through a double bridge, first imagining those we’ve already lost waiting upon our own mortal decisions then doubling down on a commitment to life: “If your head’s on a track, then I’m on a track, too / If you’re not coming back, then I’m not coming back, too.” It ends with the narrator confronting his own father’s fear of mortality, which brings a realization that we are all locked within our own self-chosen patterns all leading to the same conclusion. “Dust” is a confrontation of depression and its myriad traps, a song that brings catharsis to any listener bitten by that “black-eyed dog” as Nick Drake once sang of his own depression, carried along by Faucett’s harrowing vocal performance.

Accompanied here by a full band, It Took the Shape of a Bird cooks up a racketous stew that skirts the boundaries of folk-rock and the blues. Where the instrumental sparseness of Blind Water allowed Faucett to spotlight his voice and lyrics, these new songs rely as much on sound as symbol to convey their heart-on-the-sleeve sentiments. It shows Faucett’s growth as a bandleader and arranger and solidifies his stature as one of the strongest voices among contemporary songwriters.