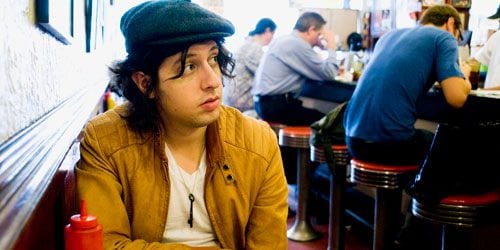 Adam Green was unwillingly thrown into the spotlight by the major motion picture Juno, 2007’s feel-good romantic comedy of the year. The movie’s producers tried so hard to be hip that they dug deep into early ’00s indie pop for inspiration. And not only did The Moldy Peaches provide fodder for the soundtrack but their music was also featured prominently in the movie, particularly in the closing scene when the flick’s two co-stars performed a tear jerkin’ version of the Peaches slacker love song, “Anyone Else But You”. The scene really pulled on the hipster heartstrings and started speculation about a Moldy Peaches reemergence. This culminated in the awkward appearance of members Kimya Dawson and Adam Green on ABC’s daytime talk show The View. The performance, jarring in more ways than one, had exurban soccer moms bobbing their heads along to quirky lines such, “Squiched up your face and did a dance / Shook a little turd out the bottom of your pants”.

The Moldy Peaches brand of anti-folk was never supposed to be accessible. Their lyrics have enough blatantly offensive four letter words to prove it. So now that they’ve been lionized by an award-winning movie and appeared on daytime television, you can put the proverbial nail in their Moldy coffin and hope they focus on their solo projects. On one side of the equation Kimya Dawson has continued down the minimalist path once blazed by the Moldy Peaches, creating cutesy folk songs which find beauty in their utterly honest simplicity. Green, however, has taken an alternate route, steadily evolving his persona into a pseudo-cabaret shtick with grandiose orchestrations built around his nonsensical, potty-mouth lyrics.

Jacket Full of Danger (2006) had Green’s goofy baritone fronting what sounded like a farcical lounge act. Like Beck minus the groovy basslines, Jim Morrison still alive and post-rehab, Jacket Full of Danger was full of bombast but lacked in substance. The album was a success with backpacking European college students, but a brutal headscratcher for just about everyone else. Green seemed content with making nothing out of nonsense instead of crafting his obvious talents into something more meaningful; then came Sixes and Sevens. If Green’s previous work scattered his talent around buckshot, his new effort packages him neatly with 20 short songs -– each one with a quirky personality of their own.

On the album’s opener, the surprisingly sunny “Festival Song”, we are treated to ’60s, Brian Wilson-esque harmonies. “Twee Twee Dee”, a swanky tune with a Vegas swagger, could be a standard performed by a Tom Jones-like character in a shady back alley bar room. “Tropical Island” has the chimes and Hawaiian flavored guitars of a Don Ho classic, creating the perfect aura around Green’s lyrics. “You Get So Lucky” is a methodical folk tune with a South American flavor driven by pan flutes and jaw harps. Green is at his most soulful and sentimental on “Getting Led” while horns and gospel-tinged backing vocals collide on tunes like “Morning After Midnight” and “Broadcast Beach”. The country song “Be My Man” sounds like a Johnny Cash tune that inexplicably references “Tom and Jerry” repeatedly. The only Moldy Peaches moment comes with the gentle duet “Drowning Head First”. Green’s girlfriend, Loribeth Capella, stands in as a female companion on the song, and her adorable voice complements his deep, mellow croon.

Although these songs do run a bit short, Sixes and Sevens features 20 delectable pop songs, each unique in its own way. Who knew pop music could be so malleable? It looks like Adam Green has finally forged an identity for himself, molding eccentric ideas around his inane lyrics. It’s hard to tell if the whole Juno experience will spawn more interest in his solo work, but having your song written into an Academy-Award winning screenplay certainly can’t hurt. Can it?