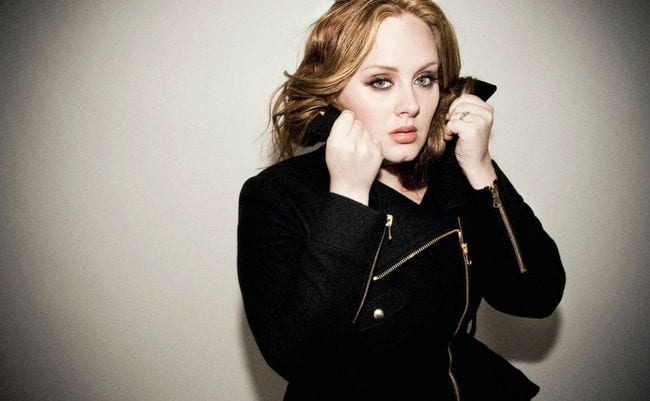 It’s not often an artist is faced with the daunting task of following up one of the most successful albums in popular music history. Adele’s 2011 smash 21 has sold in excess of 30 million copies worldwide and turned Adele into one of the most revered icons in pop music today. Her powerhouse voice, the stripped-down and soulful arrangements and terrific songs like “Rolling in the Deep”, “Set Fire to the Rain”, “Rumour Has It” and “Someone Like You” are destined to be remembered years and decades from now when music historians look back at the best and most culturally significant works of our time. 21 is one of those albums that caused a tectonic shift in the music industry. Hell, it’s still on the Billboard chart, as of this week all the way up at number 24 — it’s been camped out in the survey for an improbable 247 weeks and shows little signs of dropping out anytime soon.

Adele’s music resides in a musical sweet spot that appeals to a widely diverse cross-section of music fans, from young popsters who tend to gravitate to the more hyper R&B-flavored electronic pop that saturates the top 40, to older fans who appreciate Adele’s extraordinary voice, her elegant class as a performer, and her mature approach to pop songcraft.

When faced with an impossible task, the best course is to not even attempt it. There is very little chance that whatever Adele released in follow-up on 21 that it would match its predecessor’s hardly believable sales and chart success, nor its meteoric cultural impact. Adele smartly tries to avoid one-upping it, and instead moves in a slightly different direction. 25 doesn’t sound like a sequel to 21 — it has its own distinct personality and vibe. It’s certainly not a completely radical departure, but there are changes afoot.

First and foremost is the presence of more electronic elements, and some wildly creative rhythmic patterns. Adele works with some familiar names, like Paul Epworth, but she also brings in fresh faces like Danger Mouse to make sure that her music doesn’t become old-fashioned adult contemporary. There is more of a musical edge on 25, but it’s not anything so drastic that will scare away her less adventurous fans. 25 walks a fine stylistically line — trying to sound hip and fresh while still retaining that classy vibe that makes Adele such a ravishing presence. By and large, she succeeds. Her voice is, of course, phenomenal throughout. The songs, however, are not as immediate as on 21, and there are some slip-ups scattered about what is generally a very strong album.

First single and opening track “Hello” is a knockout ballad that stormed to number one almost immediately on the singles charts worldwide. Anticipation was such for new Adele music that the song became a cultural happening, spread all over social media as ecstatic fans got their first taste of the new Adele. “Hello” was co-written by Adele and Greg Kurstin, who also produced the track. Kurstin was once the keyboardist in the ‘90s alternative rock band Geggy Tah, and these days he’s been working as an in-demand songwriter for such artists as Pink, Kelly Clarkson and Lily Allen. “Hello” is a mixed bag. It’s essentially an intensely dramatic piano ballad about a lost love with some beautiful vocals by Adele during the verses. The slick electronic instrumentation blends seamlessly with the piano, keyboards and subtle strings. Unfortunately her vocal is mixed too high in the chorus; it’s so loud that it sounds distorted. There is clearly some digital manipulation happening which, on a voice like Adele’s, should never be necessary. All of the electronic gloop just saps Adele’s innate vocal power. Kurstin has Adele singing like he might have Kelly Clarkson on any typical top 40 power-ballad. It does build to a stirring climax, with the swirls of electronics and backing vocalists lifting Adele’s gorgeous lead. “Hello” has more substance as a song that the typical cheesy ballad on pop radio, but the glistening pop sheen detracts from the power rather than adds to it. Also, let’s face it: it’s nowhere close to “Rolling in the Deep”, the lead single from her last album and easily one of the decade’s premier pop recordings. As the first single from the most feverishly anticipated album of 2015, “Hello” is not a home run, but at least it’s not a strikeout.

“Send My Love (to your new lover)” is Adele’s fearless declaration that she’s finally over the tormented relationship that shaped much of her last album. It’s an upbeat pop tune with electronic beats and a strong vocal from Adele that rises and falls with the rhythm. The song is co-written and produced by the Swedish hitmakers Karl Johan Schuster and the great Max Martin. Adele is clearly trying to experiment more in the glistening pop realm of the top 40, and it’s certainly a worthy idea to try something different. Some purists may complain about that, but let ‘em. There is nothing wrong with great pop music, and “Send My Love (to your new lover)” has undeniable attitude and is an earworm that will surely be chosen as a single. “I Miss You” is co-written by Adele with Paul Epworth, and produced by Epworth, who also had a hand in several tracks on 21. Unfortunately Adele loses herself a bit in “I Miss You”. The melody isn’t particularly strong, and although the electronic beat and Adele’s repetitions of “I Miss You” become hypnotic, her overpowering vocals during the chorus are borderline annoying.

Perhaps it’s not a surprise that the album’s finest track by a wide margin sounds like it could have been airlifted right off 21. “When We Were Young” is a bittersweet epic co-written by Adele and the gifted songwriter Tobias Jesso Jr., and produced by Ariel Rechsthaid. “When We Were Young” is breathtaking, an example of how great Adele can be when all the stars align. This slow-burning ballad which builds to a powerful climax should have been the first single. It’s more complex than “Hello”, has more emotional depth, and Adele’s vocals are good enough to bring tears to the eyes. 25 is worth picking up for this song alone.

Adele continues to switch up collaborators from song to song. On the soulful ballad “Remedy” she co-writes with one of pop music’s most in-demand writers and producers, Ryan Tedder. Like with other songs on 25 there is an over-glossy commercial sheen that sounds more at home on a Kelly Clarkson album than Adele. Adele’s voice is lovely and fully committed, and the song’s melody insinuates itself into your brain on repeated listens. It’s a song that one can imagine Adele absolutely knocking the audience off their feet in a live setting.

“Water Under the Bridge” is another collaboration with Kurstin, and it’s one of the least successful tracks on the album. She brings in a gospel choir to sing in the background, but unfortunately the heavy electronic beats and Adele’s too-loud vocal (which again sounds as if it’s been digitally treated) just overpower the song. Melodically it’s very much something you might expect to hear on top 40 radio today. The song does pick up as its reaches a stirring conclusion, when the gospel choir finally gets going and there’s a massive wall of sound at the song’s climax.

“River Lea” is co-written and produced by Danger Mouse, and is all over the place, with a complex multi-layered vocal arrangement over very basic, almost trip-hop instrumentation. The melodic hook in the chorus snags your brain after repeated listens and doesn’t let go. Adele’s vocal is again heavily treated with studio effects, which seems a shame. Let her magical instrument shine unimpeded. That said, “River Lea” is an engaging track that really sounds nothing like anything Adele has done before.

Next up Adele teams with noted Australian songwriter and producer Samuel Dixon on “Love in the Dark”. It’s up there as one of the album’s strongest moments. It’s a beautiful ballad with tense piano, lush strings and an unforgettable vocal performance by Adele. The multi-tracked vocals during the chorus are nothing short of chill-inducing. When Adele is on, she’s as good as it gets. It’s an absolutely convincing vocal performances and a new classic.

Adele starts singing over a simple acoustic guitar accompaniment on “Millions Years Ago”. Then suddenly a line of backing vocals meant to mimic strings come in before Adele jumps an octave and delivers a beautifully poignant vocal performance. The stripped-down vibe of the song is a welcome respite from the heavy duty production that most of the album labors under. “Million Years Ago” mostly serves as a reflection of what might have been, if only the producers had a bit of a lighter touch with some of the over-the-top arrangements.

“All I Ask” is another showstopping highlight. Co-written by Bruno Mars, the sizzling hot R&B dynamo delivers an absolutely thrilling vocal performance. Adele is more than a match of him. These are two uber-talented individuals at the top of their artistic and commercial game giving knockout performances on a gorgeous ballad. Does it have a little of that sappiness that often infects love ballads? Well, yeah. But it’s executed so well that hardly matters. It could be this generation’s “Endless Love”.

The acoustic-kissed “Sweetest Devotion” is an upbeat and pleasant finale. Working again with Paul Epworth, “Sweetest Devotion” has perhaps the most rock and roll vibe on the album. Adele shows that if she ever wanted to give up singing uber-dramatic torch songs she might have a career as a rock n’ roller. It would be entertaining to hear her tackle Zeppelin songs, without question.

The bottom line with 25 is that it’s not likely to broaden Adele’s appeal, but it certainly won’t in any way damage her. It’s never going to equal the almost incomprehensible success of 21, but it doesn’t have to. Adele has a phenomenal talent as a vocalist. She could sing the phone book and it would be worth hearing. Unfortunately, too many of the songs here just sound bland, and too heavily produced. Perhaps she would have been better off going with a classier approached, and laid off a bit on the electronics. Of course, she has to decide if she want’s to be a torch singer or a pop star. With 25 she is veering dangerously close to Celine Dion territory.

Sometimes the desire to distance yourself from a prior album leads artists to make decisions for less than artistic reasons. Experimentation is all well and good, but in the end it comes down to great songs. There are some extremely powerful moments here, most notably “When We Were Young”, which is destined to be a global number one and probably a multi-Grammy winner. The rest of the songs range from pretty darn good to so-so. There is nothing terrible here, and since we’ve already decided that comparing it to 21 is a pointless exercise on it’s own 25 is going to entertain most of the Adele fans that pick it up. And honestly, isn’t that the point? No, 25 is not going to outsell 21, but what of it? If you’re not an Adele fan, this album isn’t likely to make you a convert. If you’re already a fan, get ready to sit back, relax, and let Adele’s vocals (overly loud as they may be at times) wash over you. Adele is a singular talent, and the moments of brilliance are well worth wading through the few flashes of average.