Cartoonist Aimée de Jongh has left her homeland of Holland and arrived in North America, via the wonderfully circuitous routes mapped in her first English-language graphic narrative, Taxi!

I understand the impulse to describe the memoir in film terms (a back-cover blurb refers to her “cinematic sense of storytelling”). The content is also reminiscent of Jay Jarmusch’s 1991 film,
Night on Earth, about five taxi drivers and their passengers in five cities, two of them overlapping with de Jongh’s. Instead of interweaving simultaneous events though, de Jongh reaches across time, connecting actual conversations from her backseat vantage.

After opening in Los Angeles in 2014, the comic leaps to Paris 2018, then backwards to Jakarta 2017, and then to DC during the same year. The leaps are artfully linked. The L.A. driver honks his horn in 2014, and suddenly the Paris driver is honking too, erasing the four years and thousands of miles between the paired actions. Another driver declares, “Welcome to Jakarta,” and next de Jongh is standing under a partially cropped airport sign welcoming her to the United States.

Next, a voice on the radio introduces an L.A. weather report, and we’re back in the puddles of rainy Paris. A complaint about crowded streets segues to an even more crowded, full-page image of a Jakarta traffic jam. Each leap occurs with a page turn, emphasizing the page as the primary unit of structure. 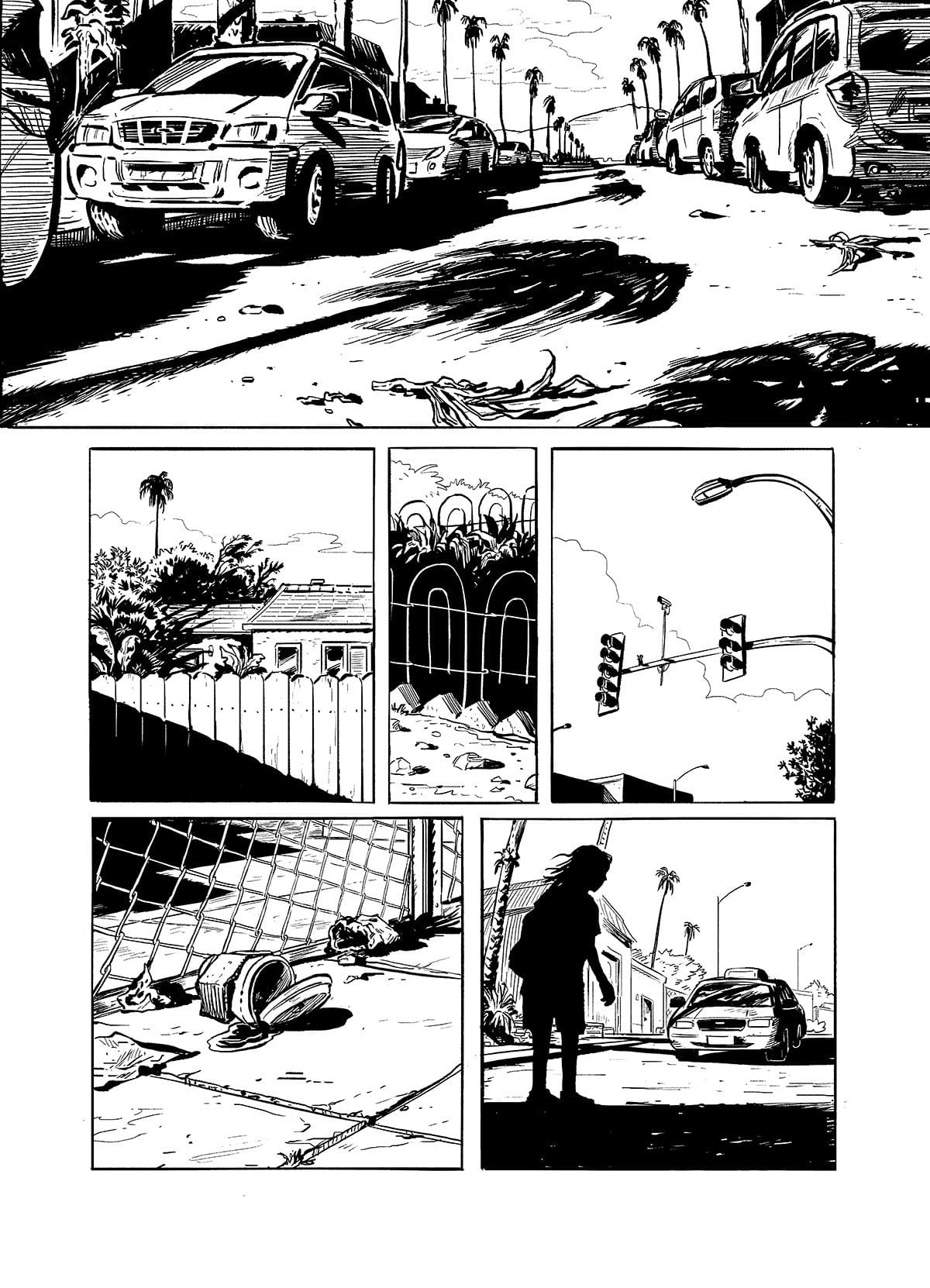 De Jongh is an expert of visual rhymes, placing the grinning face of the Paris driver in the bottom right panel of page 18 and the stony face of the L.A. driver in the same layout location on page 21. Though the two images are ten panels apart, the placement encourages a flipbook-like connection that ignores sequence in favor of a physical cross-reading.

These kinds of rhyming leaps define the narrative logic at a deep level. De Jongh constructs a jigsaw puzzle of personalities, life experiences, and national identities, where even contrasts ultimately reveal connections. The DC driver rants about the dangers of texting drivers, while the Jakarta driver spreads a newspaper across his steering wheel. The grumpy veneer of the L.A. driver hides a secret warmth, while the cheerful surface of the DC driver keeps splitting with angry asides. The Jakarta driver’s father died three days ago, while the DC driver has been on the job for three days, returning after the trauma of witnessing a fatal car crash two years earlier. De Jongh gives no hint at order, instead building an expanding sense of an all-encompassing present.

While the memoir collapses time and space, it also breaks down ethnic divisions. De Jongh opens with her account of a dark-skinned friend who always misses connecting flights while delayed by security. The Paris driver laments about the challenges of being Muslim in a city of chocolates during Ramadan, unaware that he’s passing a street memorial to cartoonists murdered by terrorists. He was born in France, but his parents are from Algeria.

He mistakes de Jongh for Greek, but her family is from Indonesia. She’s lived in Holland her whole life, and the Jakarta driver flinches at the word, accusing her of 300 years of brutal colonial rule. But then he reveals that his father is from Holland, before sharing pictures on his phone of the recent funeral. 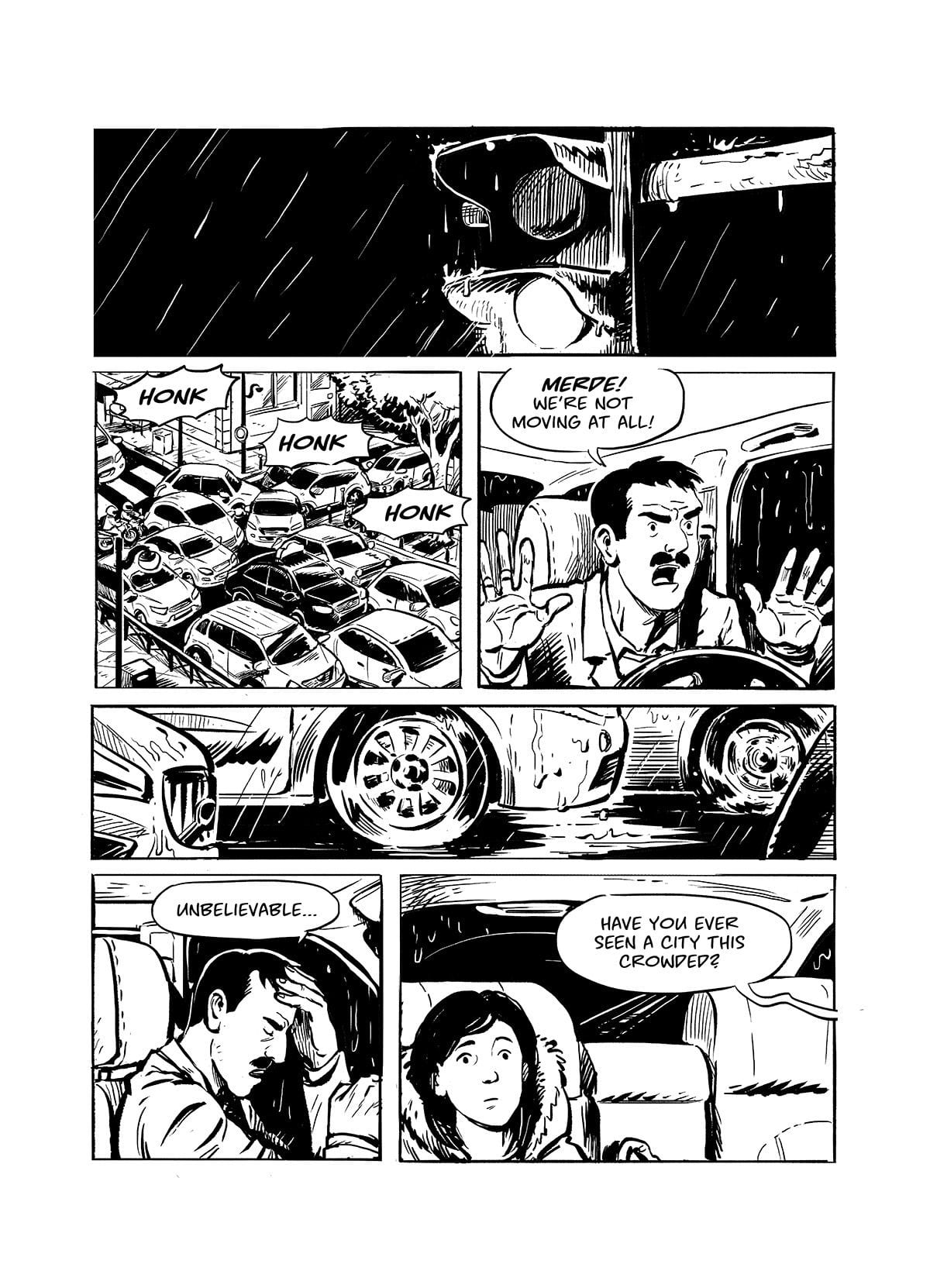 De Jongh’s cartoon style forms yet another link, as if all of these characters are distant relatives sharing similar faces and body types, all of them wholesomely hobbit-like in their squat proportions and slightly-too-round heads. The effect is heightened by de Jongh’s otherwise naturalistic attention to detail; the textured bark of palm trees and the refracted light in street puddles.

She allows herself the occasional cartoon convention of emanata lines surrounding a surprised expression or motion lines trailing a moving car, but she explores her own subtly idiosyncratic flourishes too. I especially admire how she draws talk balloons contained and sometimes even blocked by the window frames of the taxis, as though the dialogue can only be partly overheard by the viewer standing outside of the car. The inclusion of a photocopied receipt from the DC driver on an otherwise blank page is also a pleasantly jarring visual break from the book’s drawing norms and a reminder that the events are remembered rather than invented.

The artwork is all black and white and sharp-lined, contrasting the softer-edged earth tones of her collaboration, Blossoms in Autumn (Self Made Hero), published earlier this year. There de Jongh was working with another writer’s script, but Taxi! proves that her narrative skills are as sharp as her drawing pens. The nominal plot of each interwoven vignette is the same: the driver’s attempt to get de Jongh to where she wants to go. But she’s already exactly where she needs to be.