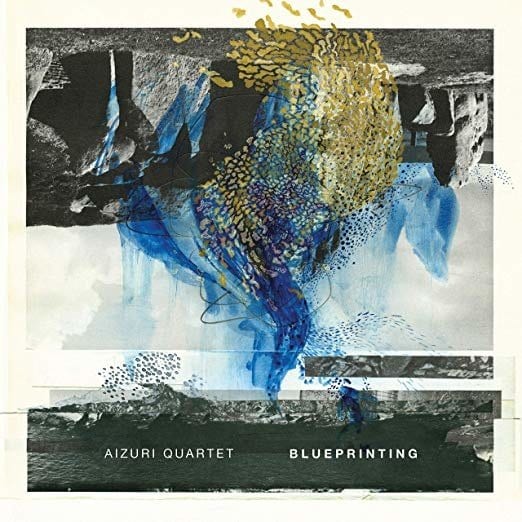 The Aizuri Quartet, like many in the new music community, value the connection between composer and performer. Comprised of five new works written explicitly for them, their debut recording Blueprinting is a testament to the vitality and energy in the contemporary classical world. Bold and brimming with stellar new works, the album is a testament both to the voices of its composers as well as the dynamic relationship between the quartet themselves.

Lead-off compositing “Carrot Revolution” by Gabriella Smith is a tour-de-force in textures and moods. Scratching violins and syncopated taps on the cello commence the piece with a vibrant burst of energy. Traditional, classical-centric string quartets often find extended techniques like these challenging to convey convincingly, but Aizuri nails the groove with a conviction and joy that will win listeners over in seconds. The quartet sculpts their performance with nuance and passion, moving from bright and driving melodies to long droning tones with ease.

Smith’s work transverses between the sublime and the abrasive, toying with one extreme before slipping into another. There are elements of Penderecki-inspired dissonance and Glass-tinged minimalism, yet nothing every sounds derivative, simply tips of the hat across a stunning musical tapestry.

Any new work from the Pulitzer-winning Caroline Shaw is cause for celebration. Inspiring the title of the record, Shaw’s “Blueprint” exploits the string quartet’s penchant for building dialogues between distinctive voices. String quartets grew out of the classical period (1750–1820) as a vehicle for developing “conversations without words”, a model all composers understand but few truly master. Using a reduction of Beethoven’s Op. 18, No. 6 string quartet as raw material, Shaw builds a quirky, multi-faceted polyphonic work that evolves with abandon without becoming cluttered or overly dense.

Moods range from comedic to mysterious to outright joy, all skillfully interpreted by Aizuri and their psychic quartet connection. Microtonal moments are used to convey unease and tension, a deft use of the modern convention that builds the work’s momentum rather than slow it. When “Blueprint” finally concludes with a charming two chord cadence, it’s nearly impossible not to chuckle at Shaw’s wit and understand why it influenced the title of Azuri’s debut album.

While Smith’s and Shaw’s works emit a sense of exuberance and joy, Yevgeniy Sharlat’s contribution, the two-movement “RIPEFG”, stems from tragedy. During the work’s genesis a beloved student of Sharlat passed away, and in this context, it’s impossible not to hear the composer’s grief and sorrow. The opening movement seems built of rage; ferocious rhythms and scratching dissonance pervade the opening movement. The inclusion of a melodica to the string quartet may seem unnecessary, but it’s enlightening how well the toy-like instrument blends with string instruments. Sneaking in haunting melodies and a ghastly waltz, the opening half of “RIPEFG” depicts the rage and anger at the loss of life in an uncontrolled and honest way.

By contrast, the second movement depicts grief through unsettled pizzicato and tension-building string scratches. While the first movement is all rage and crying at the universe, the second feels lonely and introverted, a wash of hope denied. Yet as “RIPEFG II” reaches its halfway point the violins sing out with long tones, the melodica warms up the texture, and the shifting harmonies wash over the listener like a healing sonic bath. It’s a grinding sense of catharsis, but perhaps the best one can hope for while coping with loss.

Lembit Beecher’s Sophia’s Wide Awake Dreams are instrumental excerpts from a full-length opera, giving the two movements presented here more of an abstract feel than the other full-length commissioned works on the Blueprinting. “Dream Nr. 1” is all about atmosphere and ethereal textures. A music box melody (something extensively featured in the opera) floats above cloud-soft violin glissandi, while “Dream Nr. 2” features more of the same ambiance, albeit with a slight sense of pulse. They’re graceful, delicate works, and while the movements may lose a bit of their impact extracted from the opera as a whole, they stand in stark contrast to the other compositions on the record. Brimming with subtle color changes, Sophia’s Wide Awake Dreams serve as a deep, contemplative divergence.

Paul Wiancko’s LIFT closes the record with a study in elation. Set in three movements, Aizuri shows off their dynamic and technical interplay with surprise dynamic shifts and razor-sharp quartet precision. Gestural stabs and interlocking melodies swirl and gel, revealing a wealth of colors and textures. The second movement is a standout track, progressing from moaning lines to a playful pizzicato groove, the quartet all the while making the work sounding effortless. Closing out with a coda that brims optimism, LIFT is a fantastic commission from the quartet.

There’s an energy throughout Blueprinting, a vivaciousness conveyed through Aizuri’s love of the material, and the deep connecting that runs through the quartet. This is the type of ensemble contemporary classical desperately needs, one that lifts the music right off of the page and turns into a living thing.