Is there a function to sadness? If our emotions are, in part, tools we employ to navigate the world, then what purpose does sadness serve? Some researchers, such as Joseph P. Forgas, have, in recent years, postulated that sadness carries certain specific benefits: it improves judgment (whereas happiness makes one more inclined to go with first impressions, sadness encourages one to pay close attention to a situation before reaching a decision); it correlates with detail-oriented memory (the relatively sad person is able to recall seemingly incidental aspects of a situation); it encourages motivation toward change (whereas happiness fosters stasis); and it makes one more aware of social obligation toward others. Thus, sadness is not simply the price we pay for our meaningful attachments (and their inevitable severance); it confers unsuspected benefits upon its sufferers (to be clear, we are not equating relatively mild and temporary forms of sadness with chronic, debilitating depression).

Of course, anyone familiar with ancient and Renaissance disquisitions on melancholy will recognize that these qualities of sadness have long been acknowledged. Melancholia, thought to arise from the excess of black bile in the system (hence the name—melaina chole, μελαινα χολη, means “black bile”), gives rise to a pensive disposition that bequeaths to melancholics a penetrating insight into the world, a world from which they feel somewhat detached, thus allowing for keener judgment. Indeed, melancholia was often connected to genius. The Pseudo-Aristotelian ProblemsProblems famously begins its discussion of melancholy with the question: “Why is it that all those who have become eminent in philosophy or politics or poetry or the arts turn out to be melancholics?” In essence, melancholy was connected with the highest achievements of human endeavor and yet held the greatest risks. It could lead on the one hand to depression, insanity, and spiritual torpor; on the other hand, in its most inspiring form (melancholia generosa), it inspired flights of creativity, pushing the saturnine beyond the generally accepted limits of accomplishment.

Not surprisingly, the melancholic has been widely represented throughout the history of art and, in the Renaissance, it became a notable subject for the plastic arts. One of the most tantalizing and celebrated depictions of this condition can be found in Albrecht Dürer’s widely discussed engraving Melencolia I from 1514, a work, according to the Renaissance critic Giorgio Vasari, che feciono stupire il mundo—that struck the world with awe. The angel of genius, hair wreathed with watercress, sits with darkened visage but blazing eyes, head held in her left hand, a compass (a tool of precise measurement) held loosely in her right; keys dangle from her side. Various tools lie discarded at her feet alongside a perfect sphere. An emaciated dog naps nearby while a cherub is absorbed in some manner of labor. A strange polyhedron lies behind the dog, in the midst of which appears what many perceive as a death mask. A ladder comes from an unseen realm and disappears at the top of the picture, its point of purchase indeterminable. A balance, a bell, and an hourglass are attached to the structure before which Dame Melancholy sits, a magic square is carved into the wall. In the distance a bat-like creature flies away, touting the name of the etching while a luminous presence (some suggest a comet, others a star, others still the melancholy-inducing Saturn) blazes beneath the aegis of a rainbow. 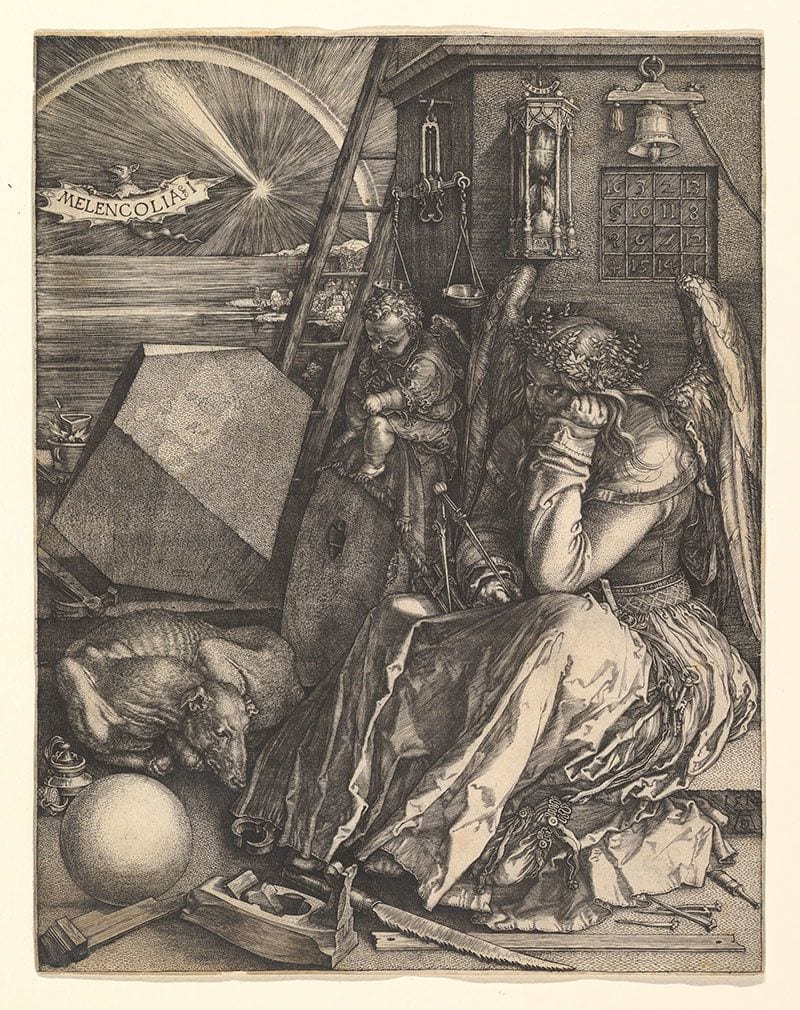 One of Dürer’s Meisterstiche (master prints) along with Knight, Death, and the Devil (1513) and St. Jerome in his Study (1514), Melencolia I has been the subject of more scholarly and lay studies than any other engraving. The artist himself provided just enough of a clue to set the hermeneutic mind reeling: slüssel=gewalt, pevtell=reichtum betewt (“key means power, purse means wealth”). But even a mere glance at the engraving suggests that the work is replete with symbols of cryptic significance. The obscure object of desire in studies of Melencolia I seems to be the ever-elusive skeleton key that will unlock its mysteries, some all-encompassing explanation that brings together the wide array of disparate symbols, forcing them to cohere into one overarching meaning.

In his new book, Perfection’s Therapy: An Essay on Albrecht Dürer’s Melencolia I, art historian Mitchell B. Merback claims that this search for a single and totalizing interpretation of the etching may obscure the manner in which it achieves its expressive agenda (38). Rather than present a cohesive, self-enclosed whole, Merback suggests, Dürer seeks to “convey the feeling of melancholic distress, to simulate the disorientation that attends a particular state of mind” (49). Merback proposes that the work is not allegorical in the sense of a rebus that can be puzzled out, where each constituent element “adds” up to a complete and contained meaning; rather the etching is both allegorical and speculative (51)—meaning that rather than asking the viewer to solve a puzzle (where no solution is forthcoming) and rather than attempting to derail thought through the frustration of one’s cognitive powers, Melencolia Iencourages one to “exercise one’s powers of discernment and interpretation in an open-ended fashion” (62). The purpose of this exercise, according to Merback, is not simply to represent melancholy but also, and more importantly, to serve as a therapeutic aid in coming to grips with the condition.

In its richly contradictory nature, melancholy can both inspire the drive toward perfection and, in its clear perception of perfection’s unattainableness, stultify it. Dürer himself saw this quite clearly, writing: “Because we cannot altogether attain unto perfection, shall we therefore wholly cease from our learning?” (15) Blaise Pascal clarifies the paradox of melancholy in his insistence that we have an instinct that prompts us to seek diversion and occupation from without (because we are miserable) but we also have a contradictory instinct that tells us happiness resides in tranquility. We exert ourselves to attain tranquility (15). Hence, Merback contends that Melencolia I inspires the melancholic not to dismiss her condition (the mere confrontation of melancholia by hope rarely dispels the former) but rather to confront it, to think it through, to transform its negative and crippling tendencies into its more enabling possibilities (the characteristics of melancholia generosa). To buttress his conception of Dürer’s therapeutic project, Merback connects his work to scholarship on Petrarch and the care of the self (most prominently by Gur Zak). In this manner, the print as speculative image offers “a moderate mental workout that calms rather than excites the passions, a stimulation of the soul’s higher powers, an evacuative that dispels the vapors beclouding the mind” (149).

In order to build his case, Merback draws on an impressive array of material: the writings of Petrarch on developing the soul’s virtues; medical writings on melancholy ranging from Aristotle and Galen to Ficino and Burton; iconographic evidence from Medieval and Renaissance paintings, etchings, prints, and drawings depicting melancholy, fate, the suffering Christ; several other works by Dürer that form a constellation of ideas, images, and motifs around Melencolia I; and a wide swath of secondary literature with a focus on the key writers on this print, including Erwin Panofsky, Frances Yates, and Aby Warburg. The book includes many fascinating insights and clever connections—although these are sometimes buried by a somewhat convoluted manner of presentation and a tendency to overwhelm the reader with detail rather than provide clear and convincing argumentation. 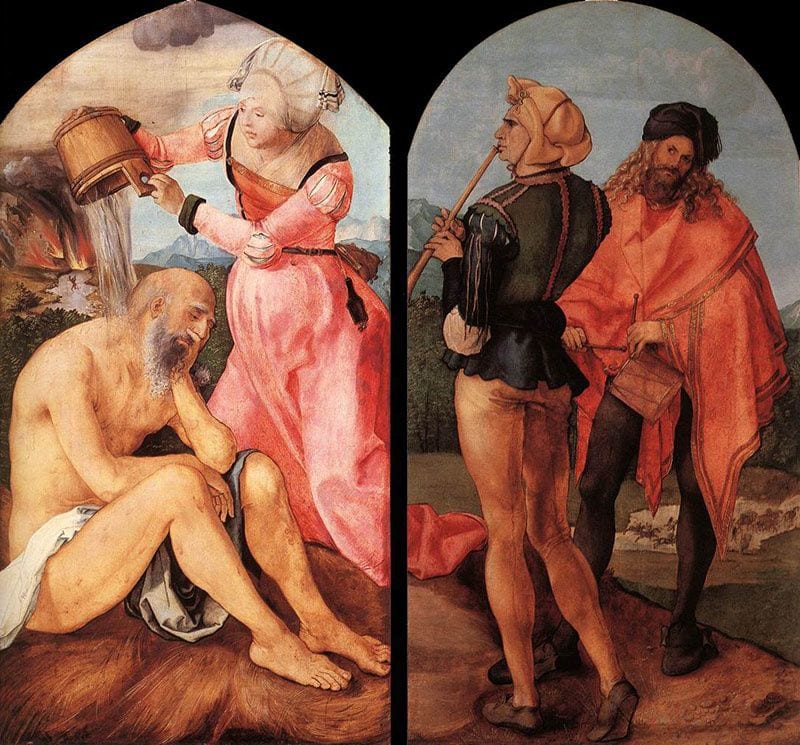 Now, while it’s obviously true that Dürer tried his hand at poetry (for which he was roundly, and justly, criticized by his peers), there’s no direct evidence (outside, I suppose, of that one flimsy reference to “this painter’s medicines”) that Dürer conceived of himself as a therapeutic rhetorician (or a rhetorical therapist) that contrived to direct melancholics toward a healthier relationship with their affliction through painting. This is not to say that Merback’s entire premise fails; we don’t need to believe that Dürer conceived of himself in this manner in order to believe that certain of his works produce a therapeutic effect. But in those instances where Merback attempts to cut through the Gordian knot of hermeneutics by grounding his readings in the artist’s biography, his reach exceeds his grasp (which may be fine for Robert Browning vis-à-vis heaven but is rather less to be admired in scholarship).

On other occasions, Merback delivers himself of winding, circuitous arguments in an attempt to prove what is ultimately an unsustainable point—or at least a point that has moved so far into the realm of pure conjecture as to render such strenuous efforts unavailing. An example of the latter can be found in Merback’s discussion of Self-Portrait with Instruments of the Passion, a striking pen drawing that Merback rightly claims has been unjustly given short shrift by critics. In this drawing, Dürer depicts himself shirtless and holding the implements of Christ’s torture (the flagellum and birch) while staring off into the distance, a breeze blowing his thinning strands of long hair in roughly the opposite direction from his gaze. Merback wants to read this image as equally therapeutic and that reading hinges on the figure’s windblown locks. 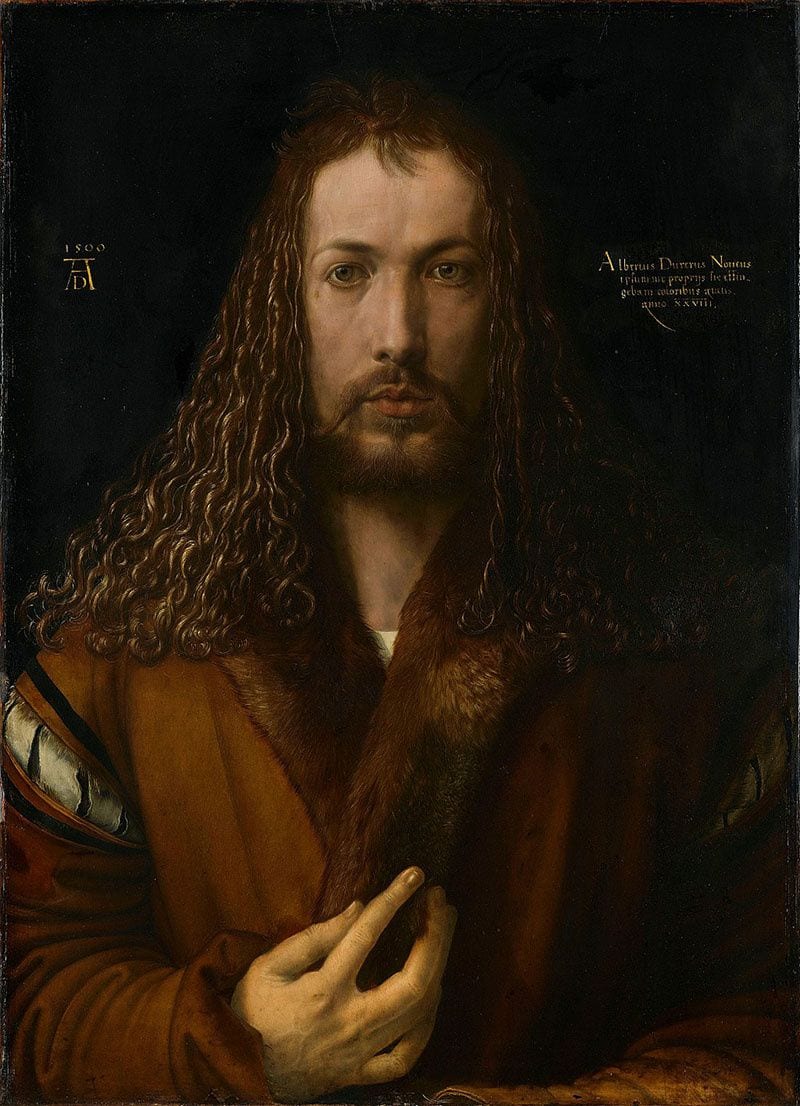 Merback points out that the personification of Fortune is often connected with wind (there is an otiose aside on the Renaissance interest in portraying wind effects in painting while avoiding non-naturalistic excess—the avoidance of excess might have been a useful guiding principle in editing this book, which is so full of asides, digressions, and meanderings as to frustrate even the most generous reader). Marsilio Ficino is quoted as stipulating that with respect to Fortune we may fight, shun fighting, or make peace; Petrarch reminds us that Virtue is opposed to Fortune. Merbeck then draws the conclusion: “fortune comes upon the individual as a quasi-physical force” but the “greater threat posed by fortune is to virtue itself” by imperiling “the project of returning to the self” (211). However, the linchpin of the argument here lies in convincing the reader that the wind in that drawing is meant to bear a metaphoric relationship to Fortune. It is not enough to claim that in some cases wind is a metaphor for Fortune; the question is: why should we understand this wind as Fortune? In place of argument, we are given a patchwork quilt of quotations and incidental observations. In cases like these (and there are several throughout the discussion), Merback seems to believe that the sheer weight of the assemblage of facts, allusions, connections, and inferences will carry the day.

Setting these criticisms aside, however, the patient and committed student of Dürer will find many things to savor in Merback’s book. It provides a solid introduction to the conceptions of melancholy to which Dürer was responding and a working overview of the immense literature surrounding this print. But more than that, it erects an intriguing mode of interpretation—one that doesn’t attempt to resolve the contradictions and ambiguities built into the print but rather to exploit the cryptic nature of the work in order to encourage deeper speculation into one’s self and the manner in which one engages with the world through the oft-misunderstood condition of melancholy. Far from decoding the work, Merback seeks to harness its potential for productively thinking through our sadness.